The instructor who authorities say attacked one student and chased another had prior complaints reporting aggressive behavior. 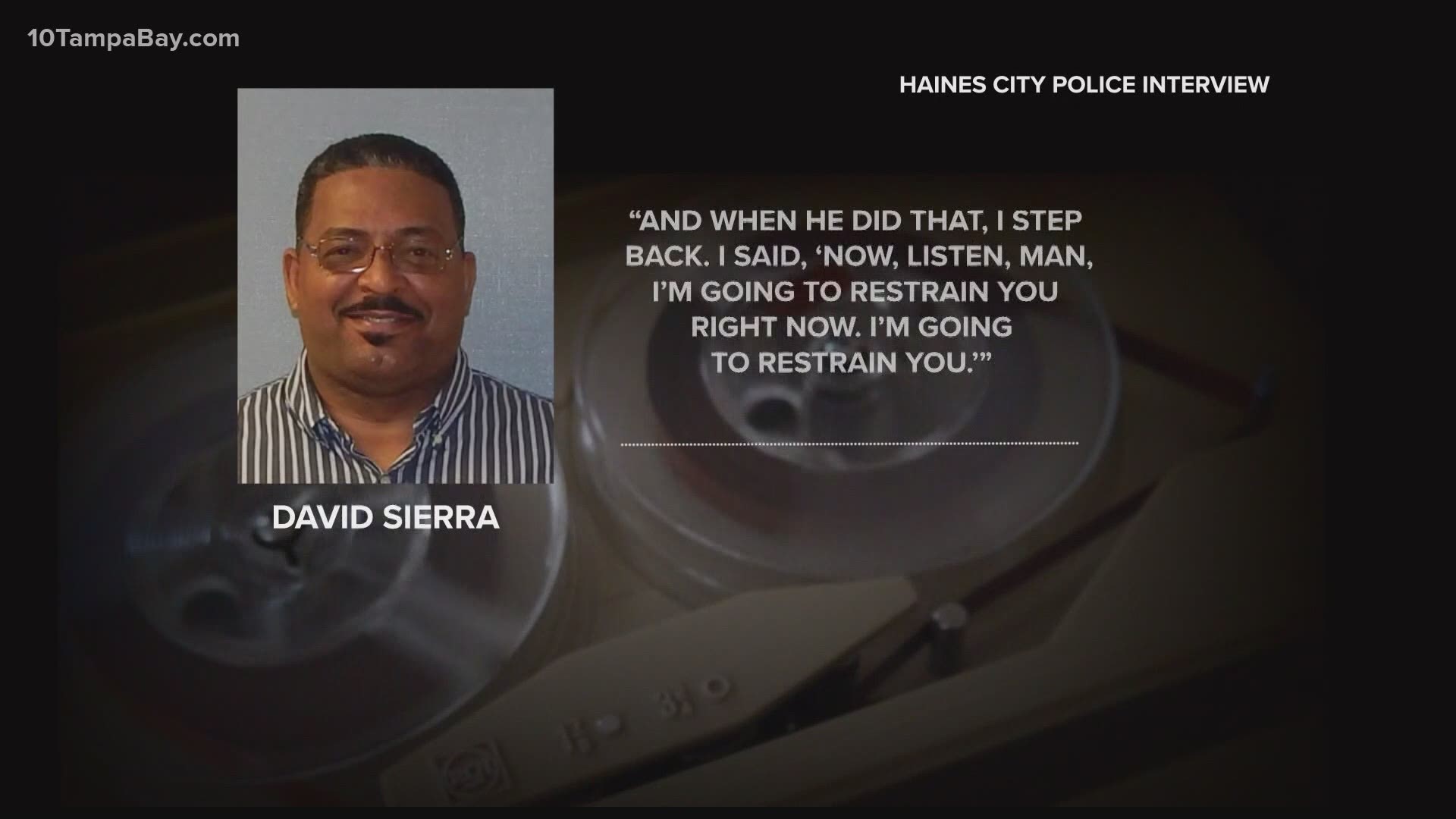 This story is the latest installment in our YouTube series, "What's Brewing,” investigative reporter Jenna Bourne's series of homemade deep dives into important issues during the coronavirus pandemic. Click here to check out the series and subscribe to our YouTube channel: The Deeper Dive.

Jalyssa Salas knew something wasn’t right when her son called in the middle of the school day.

“I pick up the phone and I hear him. And he’s, like, agitated. He’s saying, ‘Mom, this teacher just hit me. He just kneed me in my face. I’m bleeding,’” Salas told 10 Investigates.

Her son Adrian Morales was calling from his classroom at Shelley S. Boone Middle School in Haines City.

Salas said her son is not one of the students who has special needs.

In that classroom was Adrian’s regular teacher and a substitute teacher named David Sierra.

The school hired Sierra to work with the students who have special needs.

On March 3, Adrian’s teacher stepped out for a moment to make copies.

That’s when Sierra noticed Adrian wasn’t doing his classwork, according to police interviews.

“He had got closer up into my face and started yelling. He started calling me a punk. He called me the B-word, like, a couple times. And the P-word,” Adrian told 10 Investigates.

“He had grabbed me by my shirt and he was holding my shirt. So, I had pushed him off me. That’s when he had came, he swung at me, he hit me in my face. Then he hit me again,” said Adrian. “He had kneed me in my face.”

Both Adrian’s teacher and a classmate told police they saw Sierra repeatedly knee Adrian in the face.

Adrian’s friend told police he stepped in to try to separate them.

“I was like, ‘Why are you pushing me for?’ Then he started, he came after me. So, I just – just punch him in his face. Like, and then he started chasing me out the classroom,” Adrian’s classmate told police in a recorded interview.

“So, at this point, I thought, he’s a threat to every kid on campus,” Adrian’s teacher said in a recorded interview with police.

Haines City police arrested Sierra and charged him with two counts of battery and one count of disrupting a school function.

Sierra has entered pleas of not guilty.

Polk County Public Schools fired him, after less than two months on the job.

Sierra was what the district calls a provisional substitute teacher.

That means they work for the school district while working toward a certification with the Florida Department of Education.

The goal is that they will eventually become full-time, salaried, certified teachers.

Those subs work for Kelly Educational Staffing, not the district.

Sierra used to be one of those subs, and it didn’t end well.

During Sierra’s hiring process for the Boone Middle School provisional substitute job, a reference at Kelly Educational Staffing told the district Sierra was “involuntarily separated” – in other words, fired.

And when asked, “Would you consider hiring (rehiring) the applicant?” the Kelly Educational Staffing reference said, “No.”

Polk County Public Schools spokesperson Jason Geary told 10 Investigates in an email, “The principal did not seek further information from KES. When making his decision [to hire Sierra], he relied upon the majority of David Sierra’s references being positive…”

The principal didn’t ask for more info, according to the district, but we did. And that’s how we found out the reason Kelly Educational Staffing fired Sierra in 2016.

The company’s records say, as a substitute teacher working with students who have special needs at Westwood Middle, Sierra got “confrontational with students, gets in their space and escalates situations.”

The memo goes on to say the principal reported “he received several student and parent complaints” about Sierra being “very frustrated, screaming at kids” and said “he cannot have him back on campus.”

“I was shocked,” said Salas. “I was furious about it. Because why would Polk County, why would Boone Middle School hire him if he had altercations with other students in Polk County?”

Adrian isn’t the first person to accuse Sierra of violence.

In 2014, Sierra was arrested and charged with domestic battery.

A family member told the Polk County Sheriff’s Office they were treated at the hospital after Sierra hit them.

The sheriff’s office report says, “He said that he knows that he should not have hit his [family member] like he did.”

But Sierra was not convicted.

The case was “terminated and dismissed” because Sierra “complied with the terms and agreements of the Deferred Prosecution Program,” which included counseling and paying fees.

10 Investigates asked the district if the school knew about this during the hiring process.

Polk County Public Schools spokesperson Jason Geary responded in an email, “A criminal background screening would include information about whether a charge was dismissed. However, a dismissed charge would not make someone ineligible for employment.”

“Why would you hire on a substitute teacher that has that kind of record and that kind of past?” said Salas. “I understand we’re going through a pandemic. And obviously, there’s many teachers that don’t want to be in face-to-face contact with students because of the virus. But to be so desperate to hire someone on is very irresponsible…I feel like they should have gotten more information.”

10 Investigates called Sierra and asked him to share his side of the story.

He told us any communication would have to go through his lawyer.

We’ve called and emailed his lawyer multiple times but haven’t gotten a response.

“I want answers and I never got any. I haven’t gotten any phone calls from any administration from the school or from Polk County School District,” said Salas.

Geary answered 10 Investigates’ questions for the school district by email but turned down our request to interview Boone Middle’s principal about his decision to hire Sierra.

After three weeks of interview requests to every school board member, we showed up before a board workshop to try to get answers.

As they walked from their cars to a side entrance, we tried to ask Lori Cunningham, Sarah Fortney, Sara Beth Reynolds, Lynn Wilson, and Lisa Miller if the district will rethink its hiring practices.

None of them answered our questions.

Board member William Allen had previously agreed to an interview with 10 Investigates, then backed out, citing Sierra’s open criminal case.

“I just don’t want that to happen again,” said Adrian.

And with two younger brothers in Polk County schools, Adrian and his mother said they can’t help but worry if there are more adults in other classrooms who have a history of red flags.

RELATED: Substitute teacher fired, arrested after police say he physically attacked a student and tried to attack a 2nd