This controversial procedure gets rid of tongue-ties in infants

10Investigates looked into the snips, clips and lasers affecting babies in the Tampa Bay area. 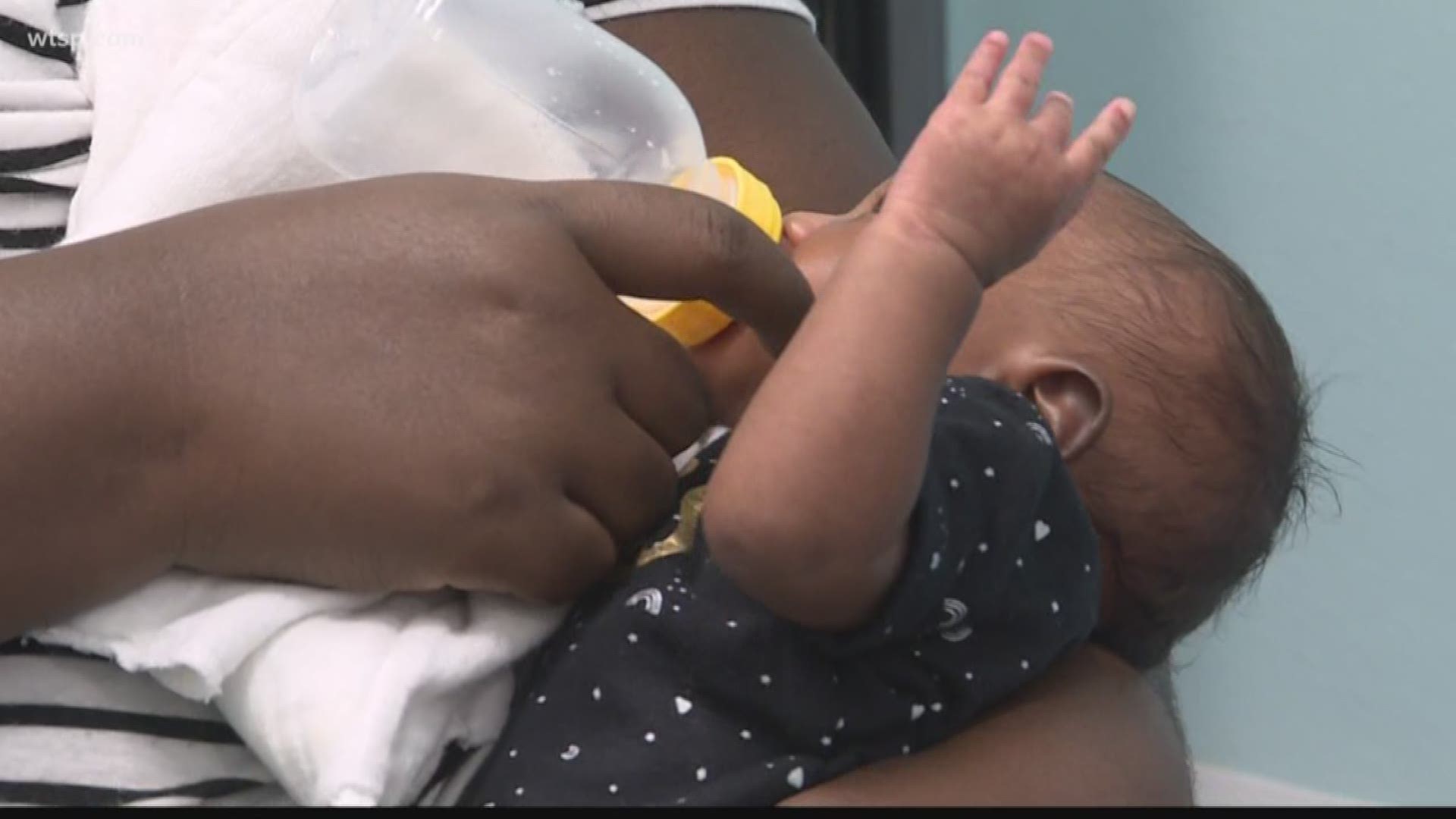 TAMPA, Fla. — It’s a little piece of tissue under your tongue. It’s called a tongue-tie.  We all have some form of a tongue-tie, but that little spot can be a big deal for breastfeeding or bottle-feeding infants.

Doctors and dentists are performing more procedures to get rid of the tongue-tie and offer relief for both the baby and the mom.

The rise in “tongue-tie releases” is causing controversy because some say it’s unnecessary.

10Investigates met 3-week-old Charlotte Robinson as she was examined for a possible tongue-tie.

Her mom, Katharyn Robinson, said breastfeeding had been difficult.  It was hard for Charlotte to latch. Katharyn said she suffered bruising and chaffing and felt like Charlotte wasn’t getting enough breast milk in each feed.

“It was really painful. I just wanted it to be easier for breastfeeding for me,” said Robinson.

Breastfeeding is important to her because she doesn’t just have one mouth to feed; Charlotte is a twin. Her brother, Chandler, was also checked for a tongue-tie.

Dr. Lauren Companioni Strahan or “Dr. Lauren” as she’s known to patients is a pediatric dentist. In her practice at South Tampa Kids Dental, she examined the twins.

“There was a difference in their latch. As soon as I put my finger in there, he completely created a vacuum seal. For his sister, it was different. Her tongue was different, her latch was different, so in her case, even though it was a ‘posterior tongue-tie,’ I thought mom would get some relief,” she said.

“If it’s easier for her and me then that is a winning combination. So yes, I chose to correct it for her,” she said.

HOW COMMON IS TONGUE-TIE?

Tongue-tie impacts 4 to 11 percent of newborns according to the UK’s National Health Service. Pediatric doctors and dentists tell 10Investigates it’s more common in boys than girls, and it usually is genetic.

While not every tongue-tie needs to be released, there has been a rise in the procedures over the past 15 years as the push for moms to breastfeed has grown.

“There’s been a huge push from the pediatric and lactation community to get mothers to nurse their babies because of the benefits of breastfeeding and so all of a sudden you have these mommies trying to breastfeed and then they may be running into problems,” says Dr. Karin Hotchkiss of Tampa Children’s ENT.

WHAT DOES A TONGUE-TIE IMPACT?

“The worst things it could cause is some speech issues. I have to say most kiddos will work through their speech issues. It might take them a little while longer, but they work through them. The things I care about is that it can have orthodontic implications and periodontal or gum tissue implications. At a young age, a tongue-tie can impact breastfeeding as well,” says Dr. Lauren Companioni Strahan.

She says if a baby is truly tongue-tied, it can impact breast and bottle feeding. The baby has a hard time latching, and that can cause pain for the mother. It impacts how they eat.

“Swallowing could be impacted. Sometimes these babies have reflux because swallowing is affected by it,” she said.

The main benefit a posterior tongue-tie release offers is relief for breastfeeding.

“A lot of these moms are so motivated to breastfeed, and breastfeeding isn’t easy in and of itself, so anything that can make it easier sounds like a deal to them,” said Dr. Lauren.

There are several ways to release a tongue-tie. Practitioners can use a laser without any numbing medication or use what’s called the “cold method.” They numb the area and use scissors to snip or clip the tissue under the tongue.

Dr. Lauren is professionally trained and qualified to use a laser. She has performed hundreds of tongue-tie releases over the past decade.

But, there’s no law requiring professional training or qualifications to use a laser to release a tongue-tie.

She told 10Investigates’ Courtney Robinson she’s shocked that doctors or dentists who have not been trained would use a laser to perform the procedure.

That’s because there are risks.

Posterior tongue-ties, like what Charlotte Robinson had, are at the base of the tongue in a high real estate area.

The wrong move can cause excessive bleeding, scarring, or damage to nerves and spit ducts, but most physicians say it is minimally invasive and there’s not a huge risk.

Dr. Alison Hazelbaker disagrees and is sounding the alarm.

She started studying this 30 years ago and created the first screening tool she hoped would help physicians decide whether a release was necessary. She is not a physician. She is a psychologist and lactation consultant.

“So what’s the consequence of performing unnecessary surgery on an infant? We don’t know! Because we haven’t studied it!” she said.

Dr. Karin Hotchkiss started studying tongue-tie releases and if there are benefits. The big question: Are we performing unnecessary procedures on infants?

“So that’s what we want to make sure we’re not doing,” said Hotchkiss.

In August she began a nationally-sanctioned study on whether infants younger than 12 weeks get relief. Statisticians at USF are already analyzing preliminary data, and it shows there’s a benefit even on babies with posterior tongue-ties.

“What’s so exciting to me is whether the baby’s six days old or six weeks old, comes in complaining of the same problems, the intervention – when appropriate – makes a huge difference,” she said.

The others agree with Hotchkiss. They say the goal is to help babies and parents, but there needs to be more research and training. Ultimately, it’s a parent’s decision, and having more information can help parents make that choice.

10investigates was there as Dr. Lauren lasered away the 3-week-old’s tongue-tie. There was some crying and bleeding, but the procedure lasted less than 30 seconds.

The moment Charlotte was back in her mother’s arms, she was content, and her mom says there was instant relief.

It was a win, but it’s what Katharyn expected. Her oldest son, who is now 4, also had a tongue-tie corrected. It worked for him and for Charlotte.

“To those naysayers, try having three children that had those issues and then trying to breastfeed.  We’re not like other people, so to each his own,” she said.