She thought it was a SunPass error -- it wasn't. Turn To 10 helped solve the problem

It was an honest mistake 10Investigates was able to get to the bottom of and help find a solution. 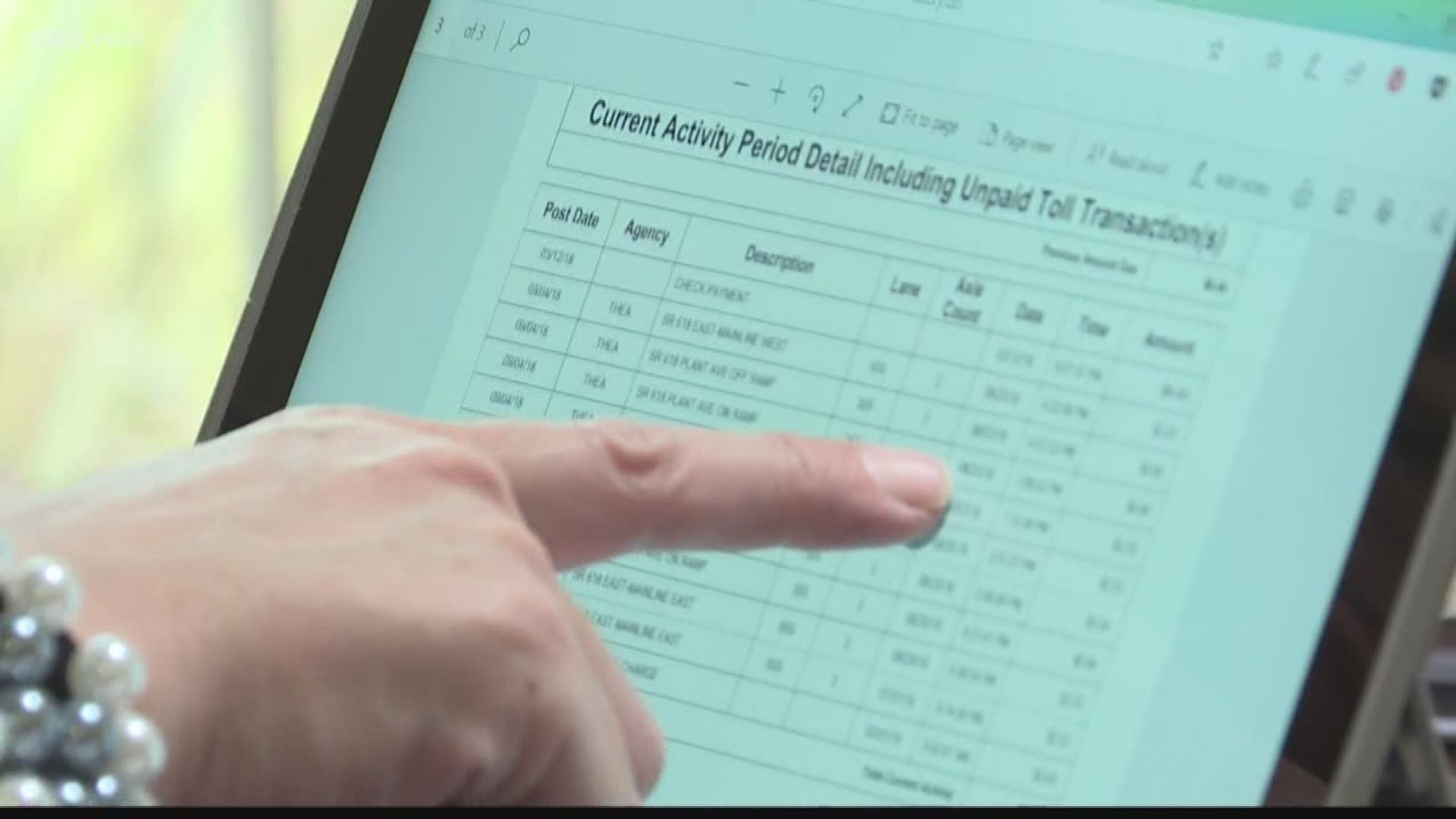 TAMPA, Fla. — We've been telling you about SunPass system billing problems since 2018. It's been billing errors, backlogged tolls and even a few cases of "that wasn't my car."

For the last few years, drivers have Turned To 10 with all of their SunPass complaints.

But, this story isn’t a case of “here we go again.”

Florida’s Turnpike Enterprise and the Tampa-Hillsborough Expressway Authority (THEA) are listening and say they’re trying to work with drivers to fix problems.

What happens when you make the mistake?

“I thought it was their problem,” said Jeanne Brunckhorst.

Brunckhorst said it seemed logical to her that SunPass had billed her twice for the same toll-by-plate charges she made on the Selmon Expressway a year ago.

“I’d seen you on TV with other people doing this. I guess there was a lot of hassle with billing people there for a while,” she said.

Brunckhorst Turned To 10 after getting several collection notices from the agency contracted by THEA. They said she owed $13.51 for trips on the Selmon Expressway. There were also late fees of $32.50 and a threat to prevent her from renewing her vehicle registration.

Brunckhorst Turned To 10.  She was adamant that she’d paid that. She even had the check.

“It turned out to be my problem,” said Brunckhorst.

You’ve probably done it. You hop on the Selmon and make the same drive over and over then you get the bills and you pay.

But, what if one slips through the cracks? Can you remember where you were a year ago and prove you didn’t make the drive?

10Investigates’ Courtney Robinson spent hours with Brunckhorst going through her toll-by-plate invoices and payments to FDOT.

“And we kind of figured out what went on,” said Brunckhorst.

Brunckhorst was part of the backlog that started in June of 2018 that 10News has reported on extensively.

In February 2019 she got a $13.51 bill for charges from August 2018 and a trip in January of 2019. She paid that bill and the check went through in early March. When she got another bill in late March 2019, she again paid and did so again and again for bills in April and May.

Then came July and a collection notice from the agency that works for the Tampa-Hillsborough Expressway Authority.

Brunckhorst said she called the collection agency and they didn't have an explanation. She got another notice in September and October.

“One of them would say 'call SunPass' and so I’d do that, and they said, ‘You don’t owe anything.’ I thought it was a wrong charge and I wasn’t going to pay it if I didn’t owe it. Why should I?”

Then 10Investigates figured out what happened.

Brunckhorst had made the $13.51 in toll charges in March plus an additional $9.45 in charges. Instead of paying the total, she only paid the new activity of $9.45. She owed that $13.51. SunPass couldn’t see that because the charges had been sent back to THEA and put into collections. That's what happens if tolls aren’t paid within 60 days.

We called Florida’s Turnpike Enterprise and THEA to ask if they could help correct an honest mistake. They did.

“You were able to go through all of my stuff and see that I did owe it and I paid it and THEA took all the charges off so now I’m happy.  If I hadn’t got ahold of you they would have stopped me from licensing the car,” said Brunckhorst.

THEA waived the late fees and took Brunckhorst out of collections and she paid the $13.51.

THEA said this is an opportunity for drivers to understand the process and how to get a resolution.

RELATED: Still owe money to SunPass? You're about to be sent to collections

RELATED: She locked herself out of her home: When she called for a locksmith, her problem got worse

RELATED: Turn to 10 looks back on another year of helping the community