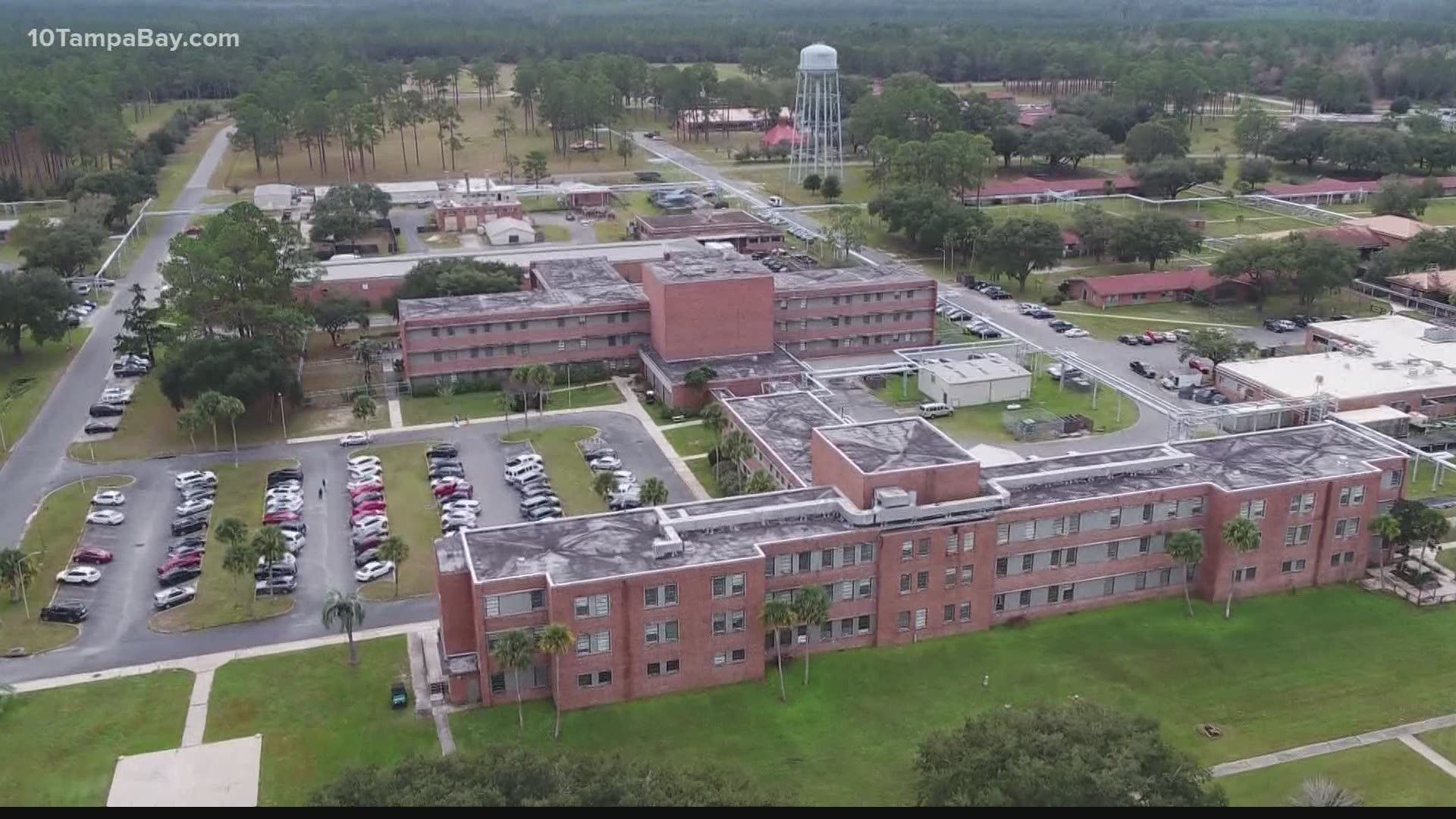 People can wind up at state-run mental health hospitals when they’re at their most vulnerable.

But state records show the DCF employees trusted to help them are understaffed and overworked.

Some are working an average of 80 hours every week.

10 Investigates found the burden is falling on the backs of patients with mental illness, exhausted workers, and taxpayers.

“My brother’s not safe in these hospitals anymore and he’s not getting the proper treatment,” said Marine veteran Jonathan Harriford.

Surveillance video from inside Florida State Hospital, a mental health hospital run by the Florida Department of Children and Families, shows his brother Sean Harriford, nude, being chased down a hallway by another patient.

“You’re seeing hallway footage of a patient, another patient attacking my brother, who was in the shower, naked,” said Jonathan Harriford.

The video appears to show that patient repeatedly striking Sean Harriford, who fights back.

Jonathan Harriford said he believes there was inadequate staffing to protect his brother, who was being treated at Florida State Hospital for schizophrenia.

“There was a lack of staff supervision in the actual bathroom itself. So, another patient came in there and he took one of those hard ‘wet floor’ signs and bashed my brother in the skull with it, while he was in the shower,” he said.

A hospital report lists two employees who got involved in the hallway scuffle that came after.

Two women can be seen in the surveillance video yelling for the patients to stop fighting and struggling to pull them apart.

“Those two individuals that were staff could not handle that situation,” said Harriford. “Our loved ones are in these hospitals. And the lack of staffing is affecting every aspect of somebody’s life that’s in there.”

10 Investigates found out about the chronic overtime through our public records request to the Florida Department of Management Services, the government agency that handles human resource management for state employees.

Pretty quickly, we noticed a pattern: The number of DCF employees who made the top 25 list has doubled every year for the past three years.

The top overtime earner in the state last year worked for DCF.

That’s about much as the average Floridian household makes in a year, according to the U.S. Census: $55,660.

That extra money comes out of taxpayers’ wallets.

“The fact that these employees at the Department of Children and Families are working so much overtime points to, I think, some systemic problems with that agency,” said Wilcox, after reviewing 10 Investigates’ findings. “I think it would be appropriate for a legislative committee to investigate and try to determine why these employees are having to work so much overtime.”

Those mental health hospitals are both in rural parts of the state and require 24/7 staffing.

10 Investigates asked DCF Deputy Secretary Dr. Patricia Babcock if all this overtime is an efficient use of tax dollars.

“When you say, ‘an efficient use of state dollars,’ I would argue, what’s the alternative? The alternative is that we have to do staff aug[mentation] contracts, which are significantly more expensive than allowing folks to work overtime,” said Dr. Babcock.

She said “staff augmentation” means contracting the work out.

Despite all that overtime, state audits have found there are not always enough people on shift at those two hospitals.

A similar audit published in 2017 found the same problem.

10 Investigates asked DCF’s Deputy Secretary if working so many extra hours is putting workers or patients at these hospitals in danger.

“No, not at all. In fact, I think it’s making sure that we have the standards of care that they should expect,” said Dr. Babcock. “We want to make sure that our staffing ratios are at the right place the entire time, you know, throughout the 24-hour period.”

“The staff are tired. And when you’re tired, we all know that mistakes can happen. Your reflexes are not what they should be. Your response time is not what it should be. It just puts a lot of people at danger, at risk,” said Whittingham, who’s also the American Federation of State, County and Municipal Employees (AFSCME) Local 985 president.

Whittingham said all that overtime is caused by one thing: Low pay.

“You have an awful lot of staff that volunteer to work the overtime because they need the finances. They need the money,” said Whittingham.

Whittingham also blames low pay for the hospitals’ struggle to attract and keep employees, despite what DCF described as “robust recruitment efforts.”

“I know people that stock shelves that make more than the vast majority of the staff at Northeast Florida State Hospital,” said Whittingham.

“We are really upping the game on the recruitment effort,” Dr. Babcock told 10 Investigates. “If you really want to do something for us, put the word out: We need folks who want to work in rural areas.”

After union demonstrations in January, Florida lawmakers approved a 3 percent pay raise for all state employees.

Whittingham said he doubts that increase will make a big difference for DCF workers at state-run mental health hospitals.

“Prior to this year, it’s 12 years since state employees had a pay raise,” said Whittingham.

Jonathan Harriford said it’s people like his brother who pay, instead.

Within that audit, DCF responded that the coronavirus pandemic is causing “critical staff shortages” at Florida State Hospital.

The agency also said it had to reassign rehabilitation therapy staff to residential areas to meet staffing minimums.

The Grandy Jury was formed in 2019 at Florida Gov. Ron DeSantis’ request after the mass shooting at Marjory Stoneman Douglas High School in 2018.

“To put it bluntly, our mental health care ‘system’ – if one can even call it that – is a mess,” the report read.

The next day, on Dec. 11, Gov. DeSantis announced $23 million from the CARES Act will go to statewide mental health services.

Why did we report this story?

This didn’t start out as a story about state-run mental health hospitals. Instead, we intended to do a tax watchdog story revealing which state employees made the most money in overtime. In May, we sent a public records request to the Florida Department of Management Services for the top 25 overtime earners among state employees for 2017, 2018, and 2019. The heavy DCF presence within that DMS data stuck out to us. When DCF told us all its employees on those top overtime earner lists worked at two state-run mental health hospitals, we realized that was the story we needed to tell, instead. The safety of mental health patients matters. The safety of the workers who care for them matters. The efficient use of your tax dollars matters.

How did we report this story?

In May, we sent a public records request to the Florida Department of Management Services for the top 25 overtime earners among state employees for 2017, 2018, and 2019. You can check out that data for yourself, embedded in this story. The DMS data we received in late October included employee names, job titles, total OT hours, total OT paid, base rate of pay, and pay cycle. We used that data to calculate employees’ average OT hours worked each week, annual salaries, and total pay with OT (assuming a 40-hour work week). We reached out directly to several employees named on the DMS spreadsheets for more context, but none of them responded. We asked DCF about its heavy presence within the data. DCF told us all its employees on those top overtime earner lists worked at Florida State Hospital and Northeast Florida State Hospital. We reached out to the union that represents many of those workers, AFSCME, to get more context from union representatives and hospital employees. We sent our findings to Integrity Florida, a nonprofit research institute and government watchdog, to see if they noticed any red flags in the data we might have missed. We also interviewed DCF’s Deputy Secretary.

How do I share my own stories and concerns?