10 Investigates uncovered inconsistent pandemic planning that left many Florida schools unprepared and scrambling when COVID-19 swept across the country.

She’s showing off her desk at home. Her shelves are piled high with books and binders, decorated with photos of friends from a time when social distancing wasn’t necessary.

It’s been about five months since COVID-19 forced students out of classrooms.

“All of the sudden, everything is gone. It’s out the window. We have no idea what to do. And the teachers have no idea,” said Mobley.

Mobley says she can sum up the transition to e-learning in one word: “Messy.”

She says technology was one of the biggest issues, specifically, access to digital learning platforms like Edsby.

“When you log onto Edsby, the first week or two, everyone was on Edsby at the same time. And so Edsby was crashing every other day. That made turning in things difficult,” said Mobley. “I don’t think [schools] had any idea of what to do, like, if we were going to be at home for a while. And they weren’t prepared for it lasting this long.”

Did schools have plans for a pandemic?

In early April, 10 Investigates sent public records requests to the Florida Department of Education and Tampa Bay’s 10 school districts, asking for any written pandemic plans they had before the COVID-19 outbreak.

These plans can show the public how prepared schools were  – or weren’t, whether they wound up following their plans, and whether they had plans at all.

The responses we got were all over the place.

Before we take a deeper dive into the local level, let’s tackle the state plan.

We have a plan, we just can’t show it to you

10 Investigates first reported in May the Florida Department of Education refuses to release the plan it claims to have had prior to the COVID-19 pandemic.

The department says it falls under its Continuity Of Operations Plan, known as a COOP for short.

Basically, it’s a plan Florida agencies are required to have to continue operations during any emergency, which supposedly includes pandemics.

But the state won’t send it to us because they say it falls under a “security and fire safety” exemption in Florida’s public records law.

We asked a public records expert to weigh in.

Of course, we don’t want to reveal information that would put anyone’s safety at risk.

That’s why we’ve asked the Department of Education multiple times to redact any part of the plan that reveals “security and fire safety” information and send us the rest.

They still won’t do it.

“We have a plan, we just can’t show it to you?  I think we need to be really honest with each other now,” said National Education Association President Lily Eskelsen García.

Major decision-makers in our state when it comes to education haven’t seen the plan either.

“Well, I don’t have the document in my hand. What I have is gone over summaries and major points,” said Diaz, a Republican representing the state’s 36th district in Miami-Dade County.

“Well, it’s tough. And that’s unfortunate for those in leadership – our governor, our commissioner of education. I think those folks have to answer for that,” said Ingram.

“Those folks have to answer for that”

At one of the governor’s recent news events in Tampa, Bourne asked Corcoran if he’d talk on camera about his office’s refusal to release the plan, among other issues.

During the news conference, Bourne asked Gov. Ron DeSantis about the Department of Education’s refusal to release its plan to the public. DeSantis did not answer, instead passing the question to Corcoran.

“Richard, you want to take that?” DeSantis asked Corcoran.

“You’ve reached out to us several times. My office has communicated with you very clearly that the pandemic plan – in it, is what we strategize on how to keep our school children safe. And it is not a public record. And if you’d like, we’ll get you the statute, we’ll get you the general counsel,” said Corcoran. “It’s about school safety and it’s about protecting children.”

After the news conference, Corcoran left out a side door.

“Mr. Corcoran, don’t you think that the public has a right to know about their plans for schools?” Bourne asked Corcoran in the parking lot.

He did not answer any further questions.

A patchwork of pandemic plans

“I think putting too much into what the state overall plan [was] misses the mark, because you’re going to have 67 different plans, to be honest with you,” said Diaz the next day.

10 Investigates found that, prior to the COVID-19 outbreak, Tampa Bay’s 10 school districts had a patchwork of pandemic plans: 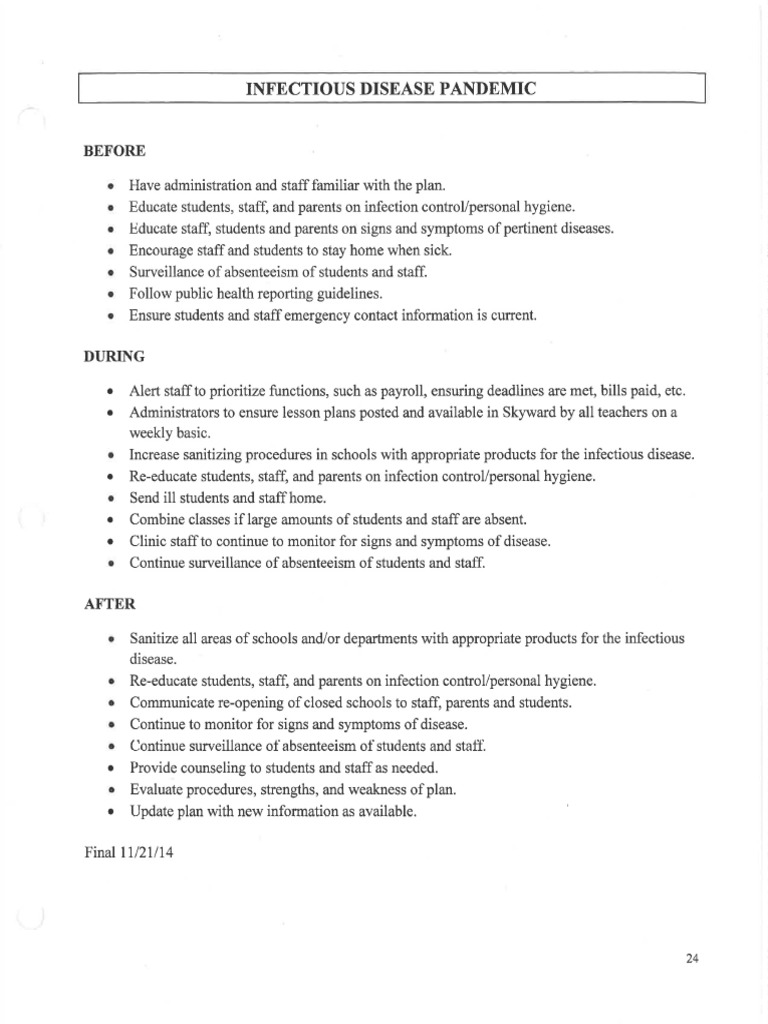 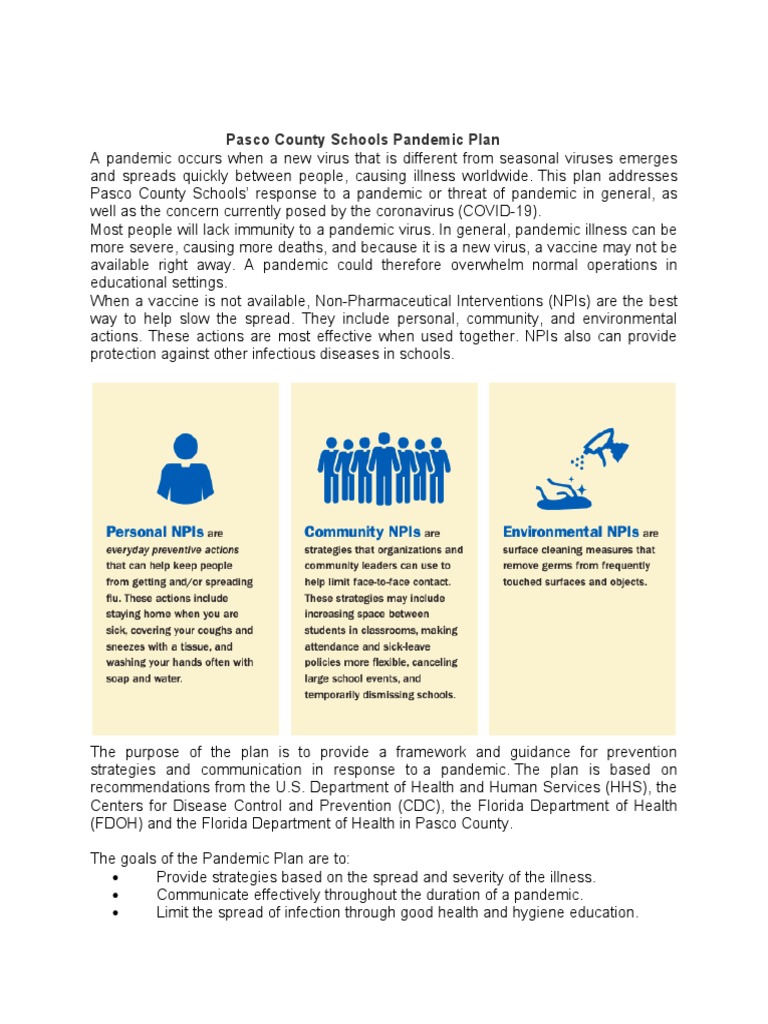 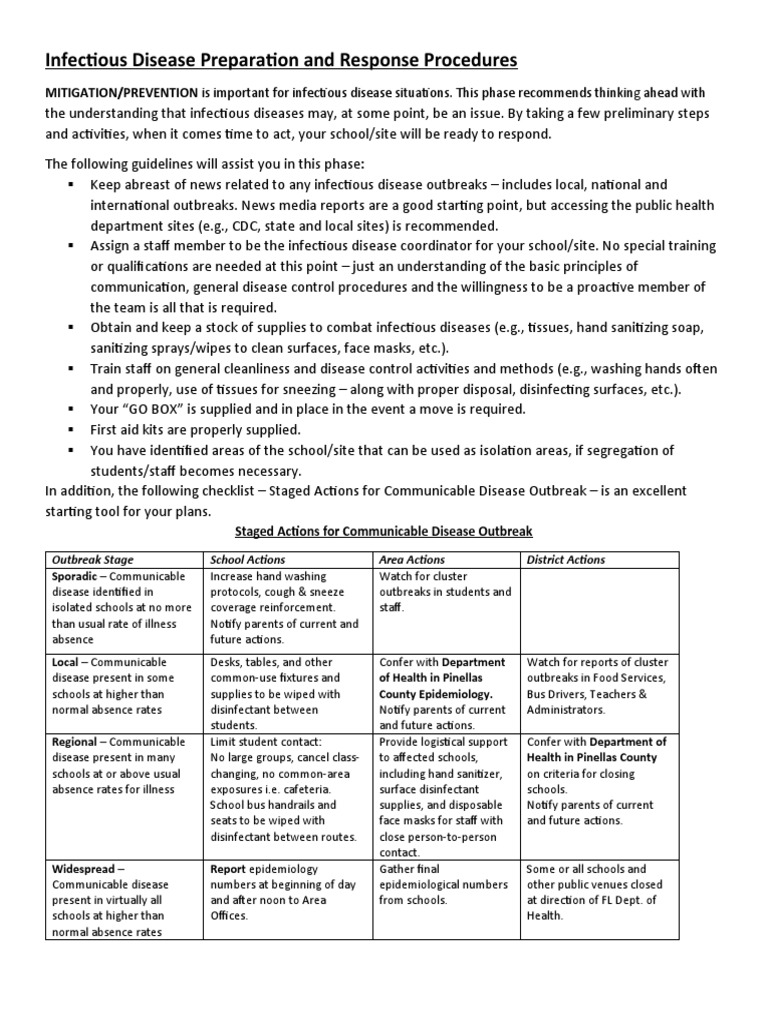 Pinellas County Schools Infectious Disease Incident Preparation and Response Checklists | Public Health | Infection
MITIGATION/PREVENTION is important for infectious disease situations. This phase recommends thinking ahead withthe understanding that infectious diseases may, at some point, be an issue. By taking a few preliminary stepsand activities, when it comes time to act, your school/site will be ready to respond.The following guidelines will assist you in this phase:  Keep abreast of news related to any infectious disease outbreaks - includes local, national and international outbreaks.

This patchwork of plans led to different outcomes for students depending on their zip codes.

“In the more rural places where we had issues with connectivity and – really, they had to kind of pivot to distance learning packets and things of that nature. We had other districts that did an incredible job,” said Diaz.

“We’ve never dealt with anything like COVID-19,” said García. “So, I don’t want to throw rocks at people and say, ‘Well, you should have imagined that this happened in some parallel universe.’ But let’s just take what we could have done this time.”

So, where do schools go from here?

All summer, each school district has been scrambling to figure out the plan for this new school year.

And Sen. Diaz said there needs to be more uniformity in the future.

“I think that there’s some structure and skeleton that needs to exist so that individual districts can make these decisions, and cater them specifically to their community,” said Diaz.

In the meantime, Mobley says she’s been stressing out about her senior year all summer.

“It’s been super nerve-wracking,” said Mobley. “It’s such an unprecedented time and no one really knows what’s going on.”

10 Investigates will keep you posted as we continue to push for the Florida Department of Education’s pandemic plan to be made public for you.

RELATED: Half of Florida’s schools named after Confederate figures may soon be renamed

RELATED: Do Florida schools need to rethink how they teach Black history?