Why are we reopening schools in Florida?

10 Investigates explains the pediatric positivity rate and illustrates the number of cases in child care facilities. 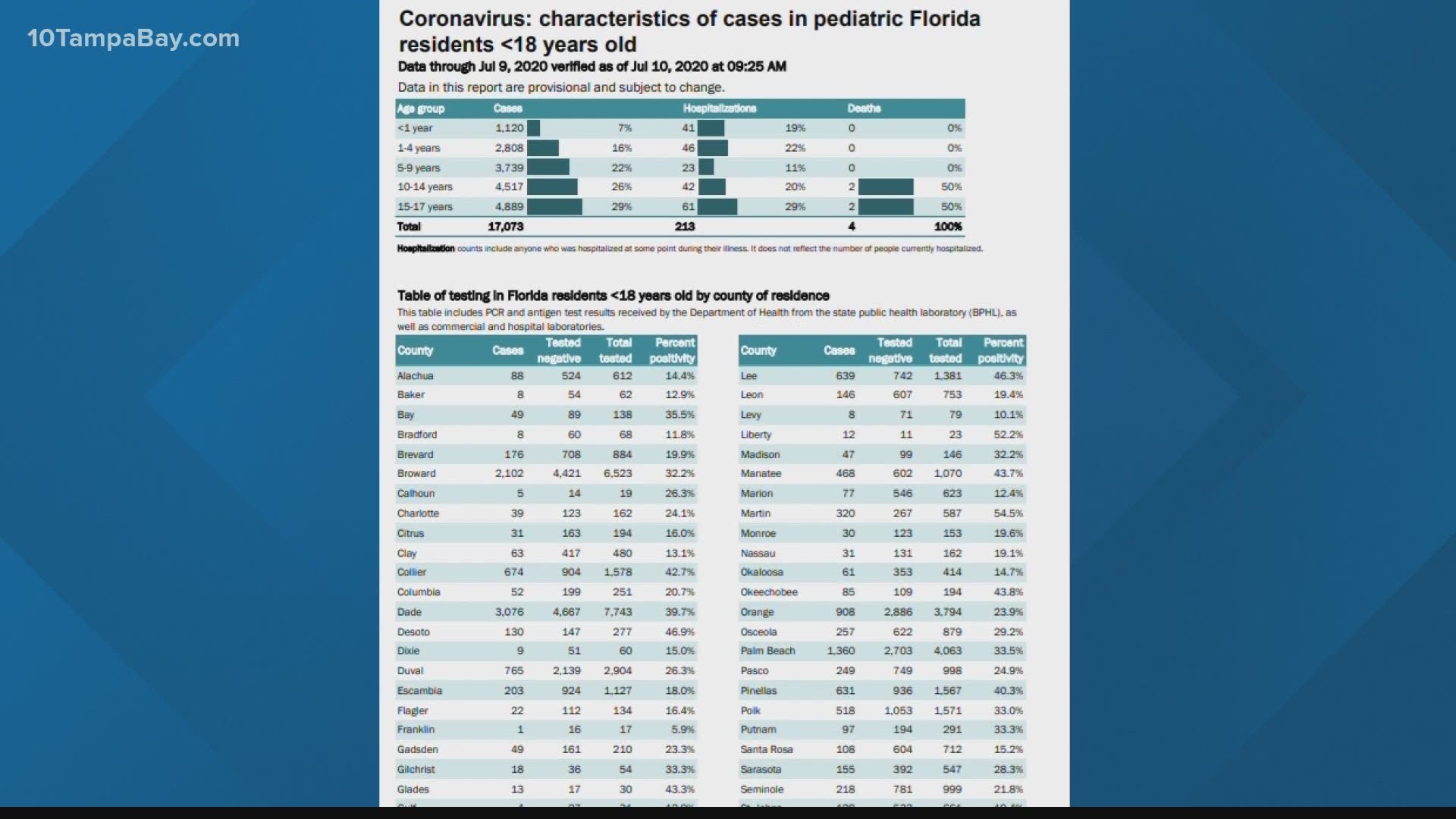 TAMPA, Fla. — Should we reopen schools?

It’s a simple question with very complex answers. Public health authorities, doctors and scientists are looking at the data for counties and the state.  As part of that, they check on something called percent positivity -- or, the positivity rate.

It’s an important percentage. It’s the number of positive cases divided by everyone tested. It’s a good way to know if we’re doing enough testing.

The numbers in the pediatric case report released by the Florida Department of Health show much higher percent positivity in most counties for children 17 and younger.

Is it a fair number to consider when reopening schools? Experts say no.

“That is really just a reflection of just the most severe children are the ones that get tested and the other kids don’t,” said Dr. Jill Roberts an associate professor at USF in the College of Public Health.

Dr. Mike Teng is a virologist at USF Health.  He studies viruses and agrees with Roberts.

“When I see that percent positivity I really do think that there’s selection bias in that positivity. I really think that’s a function of not testing our kids as widely as we test adults,” he said.

Both say more kids need to be tested. They say the rise in pediatric cases statewide since June 12 and cases in children across Tampa Bay do not show children who are asymptomatic. Roberts says that’s because asymptomatic children are not tested without known exposure.

They say looking at the pediatric case numbers combined with the percent positivity in the overall population is best.

Teng says if you have more adult cases, we will see more pediatric cases.

10 Investigates’ Courtney Robinson asked if they believe we should reopen schools. Both Roberts and Teng have 7-year-old children.

“Our case numbers in our local area are really high over the last couple of days. Some of the people that were on board with opening schools have clarified their statements that what they meant was opening schools in areas that had low community transmission,” Roberts said.

Roberts is referring to statements from the American Academy of Pediatrics and the World Health Organization regarding how to open schools.

10 Investigates also looked into the number of cases in child care facilities. Many of these facilities have remained open since March to provide care for children of working parents.

They are required to report positive cases in both staff and children to the Florida Department of Health. 10 Investigates has asked for that data.

Additionally, facilities can report to the Department of Children and Families (DCF) and the local child care licensing board.

Since March there have been 145 cases in children and staff in those programs.

In the first two weeks of July, there have been 57 total cases: 39 staff members have tested positive and 18 children.

Chowning says there have not been “outbreaks” in facilities. She says the numbers represent “a case here, another case there.”

Roberts says when looking at child care facilities you should not compare that to public schools because schools have larger populations of both students, staff and outside workers. Child care facilities have lower enrollment, fewer employees and can be better contained.