Many Seattle protesters arrested are white, from other cities, analysis finds

An analysis of nearly 100 arrest records found nearly 50% of people arrested during Seattle protests were white. 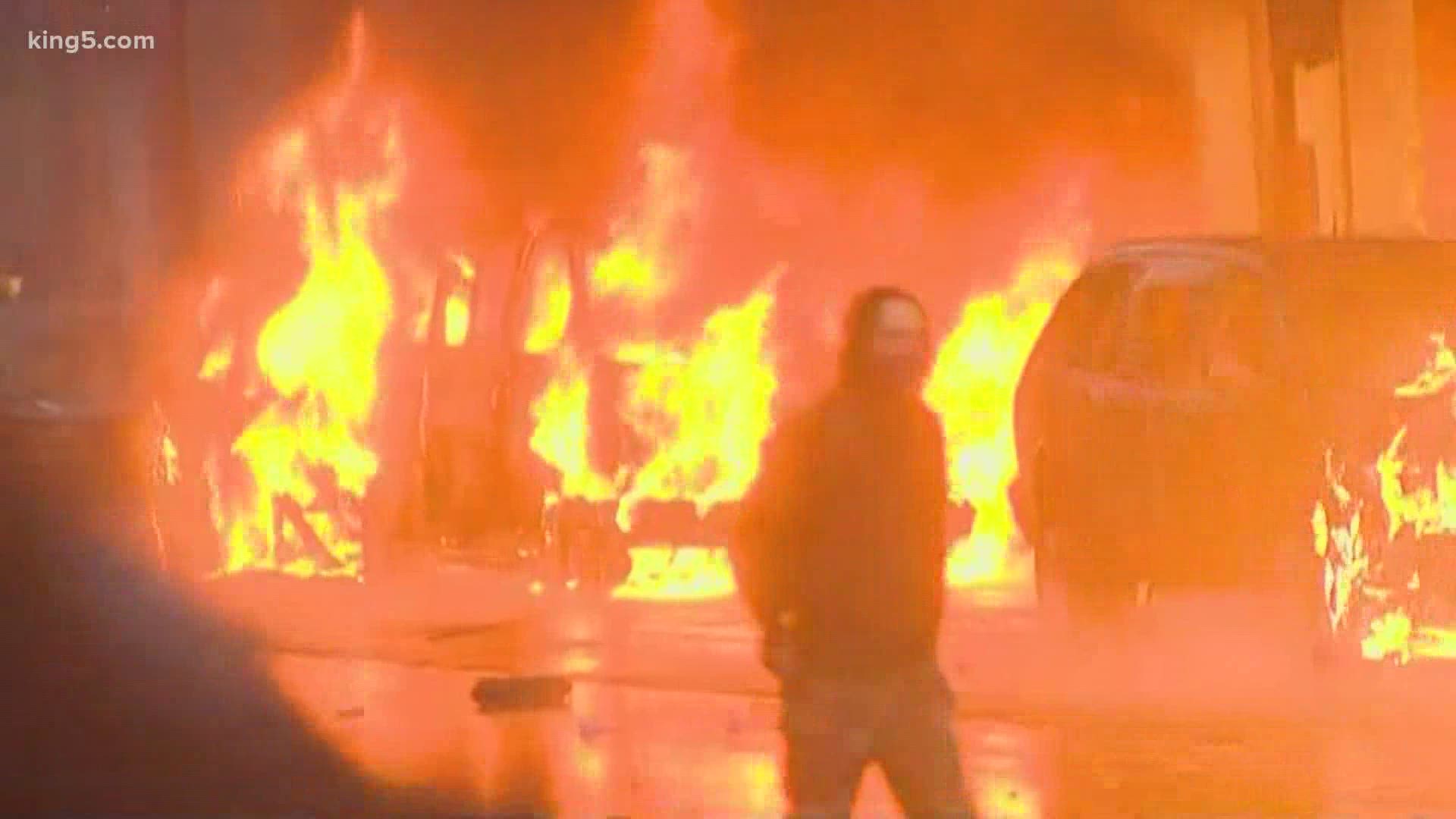 SEATTLE — When violence erupted in downtown Seattle in late May, Ed Little was disturbed by the images of looting and violence he saw on television.

“I thought it was crazy. That shouldn’t be happening at all,” said Little, who believed that peaceful protests against police brutality were hijacked by criminals.

Weeks later, there was a knock at the door of Little’s Everett apartment when police came to arrest his 25-year-old son and search the family’s apartment.

“It’s hard to believe. We don’t know Jake like that. It’s not the kind of boy he is,” Little said.

In September, federal prosecutors accused Jacob Little of stealing an M4 rifle from the back of a charred Seattle police vehicle on May 30 during riots that broke out that weekend over the death of George Floyd.

In documents charging Little with possession of a stolen firearm, investigators say a tipster led them to Little, an employee at a janitorial service in Mukilteo who worked a second, part-time job at an appliance store to help support his parents.

Little has no prior criminal record and has pleaded “not guilty” to the federal charges.

“He’s not a troublemaker. Not normally. He doesn’t go out looking for trouble,” said a baffled Ed Little.

A KING 5 Investigators analysis of nearly 100 arrest records related to the Seattle protests shows that Jacob Little fits the typical profile of the people accused of veering into criminal activity.

The suspects are mostly white men who came into Seattle from communities outside the city to commit their crimes.

Of 95 cases obtained from public records requests and through court filings, KING 5 found:

Kelly Jackson is another young, white suburbanite who has been charged by federal prosecutors with tossing Molotov cocktails into Seattle police vehicles in late May.

Jackson, who was fired from his job as a plumber’s assistant after his arrest, lives in Edmonds.

Court records show the 20-year-old was awaiting trial on three burglary cases in Snohomish county court when Seattle police and FBI investigators caught up with him.

Since 2018, county prosecutors have accused Jackson of breaking into an Edmonds ferry toll booth, a marijuana shop just outside the city, and a Stanwood animal rescue facility where he’s accused of walking off with a nearly 100-pound Rottweiler in the middle of the night.

In federal charging documents, local police recounted their many run-ins with Jackson and described him as “anti-law enforcement.”

Jackson pleaded “not guilty” to the charges he’s facing. His father declined to speak to KING 5 when reached at the Edmonds home where Jackson lives with his parents.

“He definitely doesn’t seem to have an issue vandalizing and breaking into businesses and destroying other people’s property,” Ventura said.

A white, Kirkland teen is charged is one of the most disturbing social media videos of the protests.

Greenburg is the stepson of former Kirkland State Representative Laura Ruderman, who did not respond to a message seeking comment. Greenburg’s attorney said in court that his client is the victim of mistaken identity.

When they charged Greenburg a month after the assault, court documents revealed text messages in which Greenburg and a friend allegedly conspired to set fires around SPD’s east precinct and glorified the assault on Jimenez.

“Wish he didn’t have a helmet on lol,” Greenburg texted his friend, Danielle McMillan, according to charging documents.

McMillan, a 29-year-old real estate agent from Woodinville, is also charged with arson as a co-defendant.

Because responses to public records requests have been slowed by the pandemic, KING 5’s compilation of arrest data is far from complete.

For instance, the numbers do not include most of the 261 people that the Seattle City Attorney’s Office estimates have been arrested for suspected misdemeanor charges, such as obstruction and failure to disperse.

Spokesperson Dan Nolte says city prosecutors have declined to charge 143 suspects and about 110 others are awaiting charging decisions. Of eight cases where charges have been filed, the city attorney’s office dismissed the complaints in six.

However, the arrest reports that KING 5 did obtain include Seattle police arrest records from the first week of violence starting in May, 24 cases from felony filings by the King County prosecutor’s office, and eight criminal cases filed by federal prosecutors. The records indicate the common thread among most suspects is their hostility toward government, the police, and corporate America.

“You can’t help but want to see the demise of corporate society,” Jeremiah Hilbert told KING 5, days after he pleaded guilty to looting the downtown Seattle Old Navy store.

Hilbert said he was mistreated by his landlord and lost stable housing at the start of the coronavirus pandemic. He said police and public service agencies would not help him.

When he saw the rioting unfold downtown, he said his anger got the worst of him.

“Not that it was right. I would certainly say I would not do it again,” Hilbert said.

Records show that people from near and far brought their grievances into Seattle.

Teenager Desmond David-Pitts, accused of setting fire to the east police precinct, flew in from Alaska days after he protested Anchorage police who shot and killed his brother.

Margaret A. Channon, accused of torching police cars, was reported as a missing person out of Texas and popped up in the middle of the Seattle protests.

Al Talaga of Auburn is a felon accused of possessing a handgun as he allegedly burglarized the downtown “Sneaker City” store. Federal charging documents say Talaga justified the looting by telling officers “…I know that my tax dollar that I’m paying, I’m taking it right back.”

Hilbert agreed that all he saw as crowds of looters and vandals ran through the downtown core was anger at the police and the corporate world.