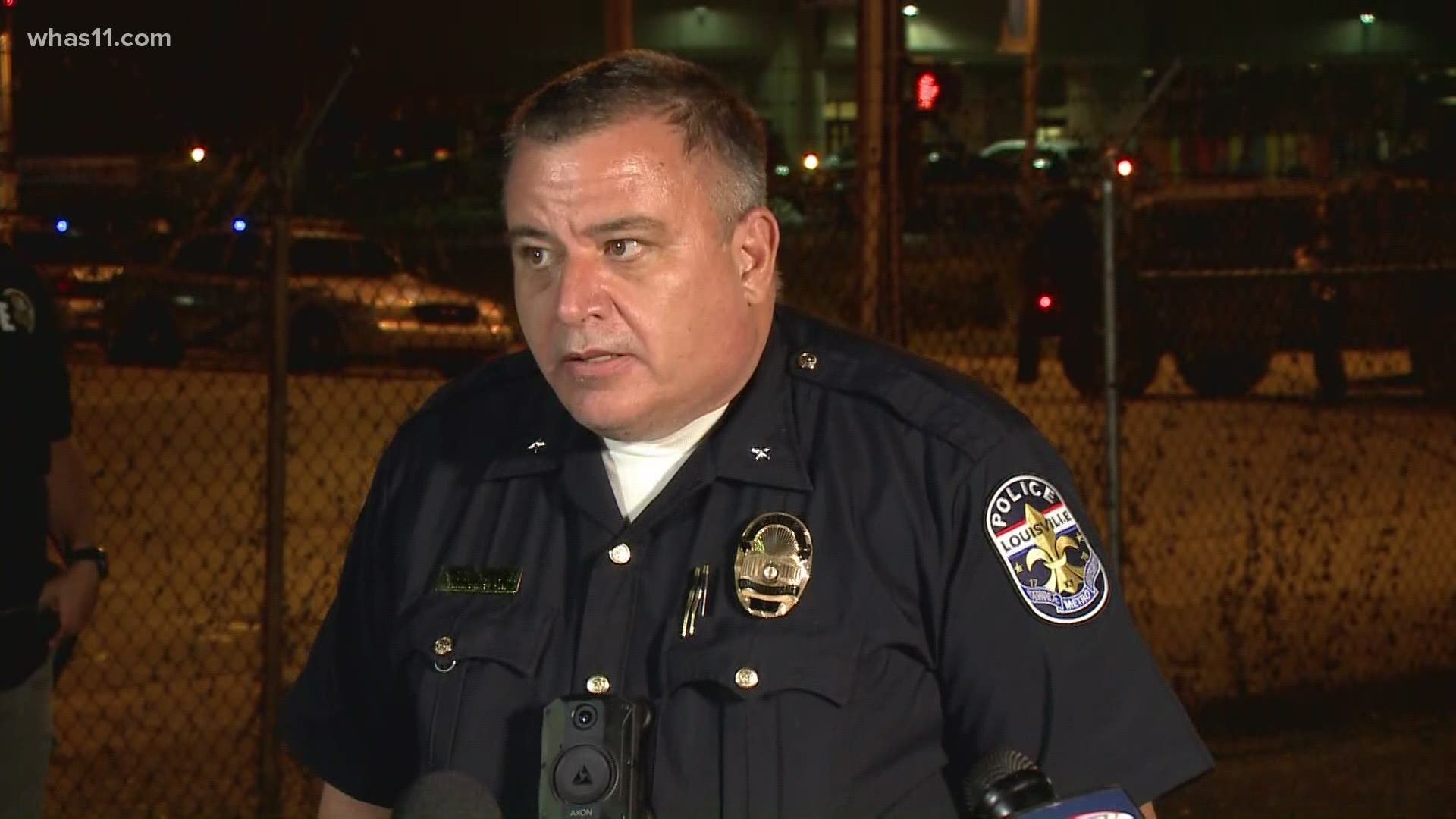 Editor's note: This blog contains details of what happened Wednesday, September 23 after the Jefferson County Grand Jury announced its decision in the case of Breonna Taylor. All times listed in Eastern Time.

A Kentucky grand jury announced charges Wednesday against a former Louisville police officer in the Breonna Taylor case, but the charges were not for her death.

The grand jury recommended three counts of first-degree wanton endangerment for former Louisville police officer Brett Hankison.  The charges were for firing into the apartments of Taylor's neighbors, according to the grand jury.

No other officers involved were indicted.

Sgt. Washington said the department expects the total number of arrests to be close to 100, but the numbers were still being tallied. He reiterated that one person was in custody for shooting two LMPD officers Wednesday evening.

Dwight Mitchell with LMPD confirmed later Thursday morning that 127 people were arrested during the protests.

1:45 a.m. (Sept. 24) FBI Louisville issues statement on Twitter, asking for the public's help to learn more about how two LMPD officers were shot Wednesday night. Anyone with photos or videos of the incident are asked to submit them online.

11:22 p.m. Louisville Mayor Greg Fischer tweets update on officers. He said their injuries don't appear to be life-threatening. He asks for prayers for the officers and their families, and the city. He urges anyone who is still out to go home. Protest during the day tomorrow.

11:03 p.m. Louisville Metro police confirm 46 people have been arrested so far today/tonight during unrest after the Breonna Taylor decision. No officers were charged related to her death. Former officer Brett Hankison was charged with Wanton Endangerment for 'blindly firing' 10 rounds some of the bullets went into the apartment next to Taylor's.

10:12 p.m. LMPD Chief Robert Schroeder confirms two officers were shot this evening around 8:30 p.m. near 1st and Broadway while responding to reports of shots fired.

Both officers are currently undergoing treatment at University of Louisville Hospital. One of the officers is alert and stable. The other is in surgery and stable.

Chief Schroeder also confirmed that a suspect is in custody.

9:02 p.m. The FBI Louisville tweets their SWAT team has responded to an LMPD officer being shot and will continue to assist in the investigation.

8:54 p.m. MetroSafe reports a second officer was shot at the initial location.

7:45 p.m. Louisville police announced 13 people were arrested during protests on Bardstown Road, while an additional 16 were arrested in downtown. Exact charges were not announced.

7 p.m. Protesters return to Jefferson Square Park. After a large boom, fires can be seen across from the Hall of Justice. Most protesters cleared out as the fires continued. Crews at the scene reported fires in downtown Louisville.

“We here in Louisville like everybody in America has got a lot of work to do to become a place of racial equity and justice. And to create that justice we know we must come together so that everyone has the chance to be heard, a time for healing, and a time for action as well.” Mayor Fischer said.

Fischer said Taylor’s case is not over, mentioning the FBI's investigation and work done in the city following its $12 million settlement with Taylor's family.

Louisville Metro police are also conducting a professional standards unit investigation to determine if any policies and procedures violated by officers involved in the case. The chief of police will then use that to determine if officers need further training or discipline.

RELATED: Mayor Fischer encourages Louisville to 'turn to each other, not on each other' after Breonna Taylor announcement

3:50 p.m. Protesters made their way to Bardstown Road, just before Eastern Parkway. Crews witnessed multiple windows being broken and some destruction of property down the road.

2:45 p.m. After the announcement, a group of protesters at Jefferson Square Park took to the streets in downtown Louisville.

PHOTOS | Protesters take to the streets after Breonna Taylor decision

1 / 65
AP
A woman speaks during a protest, Wednesday, Sept. 23, 2020, in Louisville, Ky. A grand jury has indicted one officer on criminal charges six months after Breonna Taylor was fatally shot by police in Kentucky. The jury presented its decision against fired officer Brett Hankison Wednesday to a judge in Louisville, where the shooting took place. (AP Photo/John Minchillo)

2:30 p.m. Attorney General Daniel Cameron discussed his office's investigation into the Breonna Taylor case, saying officers Jonathan Mattingly and Myles Cosgrove were justified in their use of force to protect themselves after Mattingly was struck by one bullet from Taylor's boyfriend, Kenneth Walker.

Wanton endangerment is a Class D felony. If found guilty, Hankison could face up to five years for each of the three counts.

1:47 p.m. Attorney General Daniel Cameron began addressing the public about his investigation into the Breonna Taylor Case. He said he has spoken with Tamika Palmer, Breonna Taylor's mother.

No charges from the grand jury were announced against Myles Cosgrove and Jonathan Mattingly, two officers also identified in the investigation.

It has been nearly 200 days since Breonna Taylor was shot and killed inside her Louisville apartment by Louisville Metro police officers. According to LMPD, officers were executing a no-knock search warrant at Taylor's apartment as part of a drug investigation.

Cameron was asked to start an investigation into the incident on May 13. A month later, on June 18 Cameron held his first public news conference about the investigation. He asked for patience.

"An investigation of this magnitude, when done correctly, requires time and patience. However, I can assure you at the end of our investigation, we will do what is right. We will find the truth," Cameron said.

Who was Breonna Taylor?

Breonna Taylor was a decorated emergency medical technician, working for both Jewish and Norton Hospitals. Taylor loved her family and had an ambitious drive to succeed, according to those that knew her.

"All [Taylor] cared about was being great and helping people," Taylor’s mom said.

Taylor’s family members say that she was kind, hardworking, and honest.

“She (Breonna) was already an accomplished and certified EMT for the City of Louisville and currently worked for UofL as a medical tech," said Bonica Austin, Taylor’s aunt.

Taylor did not have a criminal background. Attorneys said no drugs and no cash were found in her apartment the night of her death.

Taylor’s family filed a lawsuit against the officers involved in the shooting on April 27. On September 15, the city of Louisville announced a $12 million settlement with Taylor's family -- the largest sum paid by the city for a police misconduct case.

Nationwide there has been a call for the firing and arrest of the officers involved.

The protests began on May 28 after the release of the tapes of the 911 calls made by Taylor's boyfriend, Kenneth Walker, the night of the shooting.

For more than 100 days, protesters took to the streets calling for criminal charges to be filed against the officers involved in the shooting.

Even the $12 million settlement of the Taylor lawsuit against the city of Louisville, which also included police reforms, did little to slow the protests.

RELATED: 'No amount of money will ever amount to Breonna's death': Breonna Taylor's aunts cherish memories as they await indictment