Much has been said about the DC National Guard's delayed response to the Jan. 6 riots. But some soldiers say their voices are missing from those conversations.

WASHINGTON — When WUSA9 asked a group of five DC National Guard soldiers how many of them had concerns about how the Guard was deployed at the Capitol on Jan. 6, all five of them raised their hands.

When you're in the military, you're not allowed to talk with the press without permission. But these members of the DC National Guard were willing to risk their careers to talk with WUSA9, because they thought it was that important the citizens of D.C. hear directly from them.

They asked WUSA9 to hide their faces and change their voices because they fear the repercussions of what they wanted to say.

“DC Guard is called 'The Capital Guardians' but yet we didn't show up to guard the Capitol,” another said.

“We felt like we let the city down,” yet another soldier said.

“I was devastated, I was confused, I was wondering why weren’t we ready," a fourth added. "Why weren’t we prepared? How is it that we as soldiers are allowing this to happen? It was very hurtful to see this taking place in our city knowing that this could be prevented.” 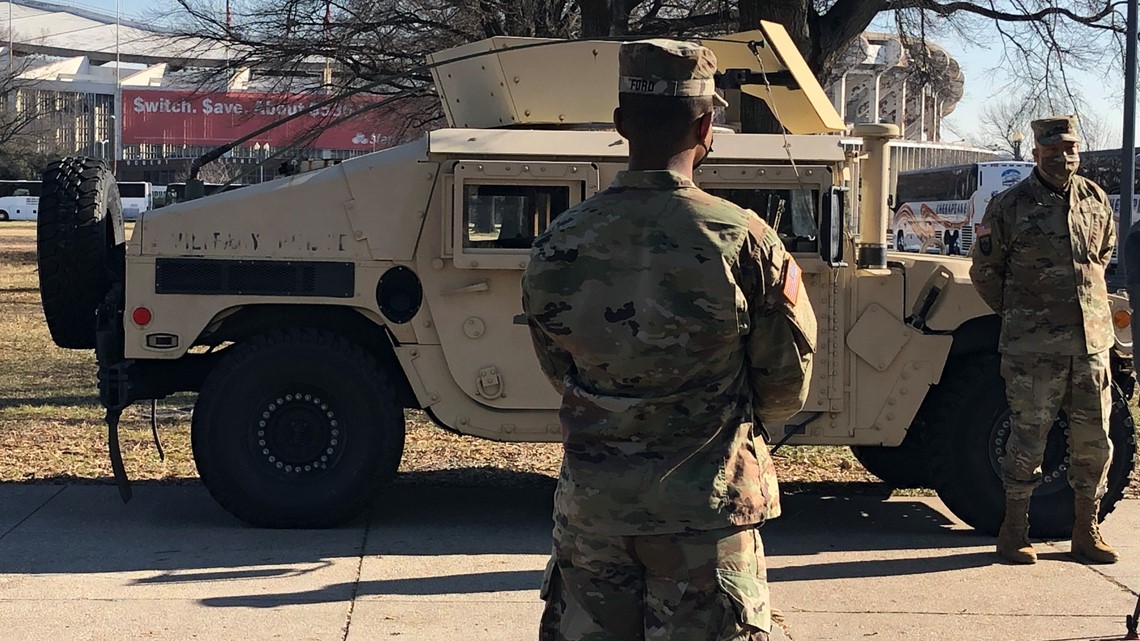 DC National Guard Commanding General talks riots and inauguration
This will be Maj. Gen. William Walker's fifth inauguration, but the first time in his tenure that the guard will be armed. WUSA9 spoke to him one-on-one. WASHINGTON - The leader of D.C.'s National Guard spoke Wednesday for the first time since the Capitol riots. There have been questions about how and when D.C.

That's right, some Guard members believe the chaos, violence, injuries and deaths that resulted from an angry mob storming the Capitol on Jan, 6 could have been prevented.

“Standing here waiting was like watching your house burn down while the fire department is stuck in traffic,” one soldier said.

WUSA9 has previously reported it took more than three hours for the DC Guard to get orders to go to the Capitol to help quell the insurrection.

“Commanders assume risk, and one of the risks that our Commander could have assumed is to mobilize troops to defend the Capitol,” one soldier said. “I seriously doubt there would have been serious blowback after that fact.”

The DC Guard was also on duty in June when they were sent in response to mostly peaceful protests at Lafayette Square after the killing of George Floyd.

“They were on the line with what many of the soldiers described as peaceful protests and yet, they were dressed as though we were in Afghanistan," one soldier described. “We're hurt that the impression was out there that we were eager to oppress the residents of the District in June but that we were meek about it when it came to January.”

As for the delay deploying on Jan. 6, these soldiers believe some of it has to do with politics. The leaders making the final deployment decisions are presidential political appointees.

In terms of preventing something like this from happening again, these service members want to be activated like other units across the country: by the leader of that state -- in this case, the mayor of D.C. -- not the Department of Defense.

They also think better planning would make a difference.

WUSA9 reached out to the DC National Guard, the Army and the Department of Defense for comment.

DOD has not yet responded.

A spokesperson for the Guard said they are unable to answer our questions "due to the ongoing investigation of the events of January 6th at the Capitol."

A spokesperson for the Army sent this response:

"Only the Secretary of Defense may approve requests from other federal agencies for DoD assistance. The Secretary of the Army is only delegated the authority to approve requests from the civil authorities of the District of Columbia and may order out the DC Army and Air National Guard after concurrence from the Deputy Attorney General. The preparation and posture of the D.C. National Guard was based on the single request for assistance the Pentagon received from the D.C. Mayor for limited support, primarily for street closures and crowd control involving 340 DCNG at various locations around the district to facilitate and protect peaceful demonstrations. The Department of Defense Inspector General is now reviewing the details of the preparation for and response to the Jan. 6 protest and attack on the U.S. Capitol. We intend to allow that process to proceed independently."

RELATED: 'I know what the Guard can do' | Here's the plan for DC's armed National Guard on Inauguration Day