Several Tampa Bay area politicians and columnists have suggested residents won't have to pay for the public subsidies. This is nonsense. 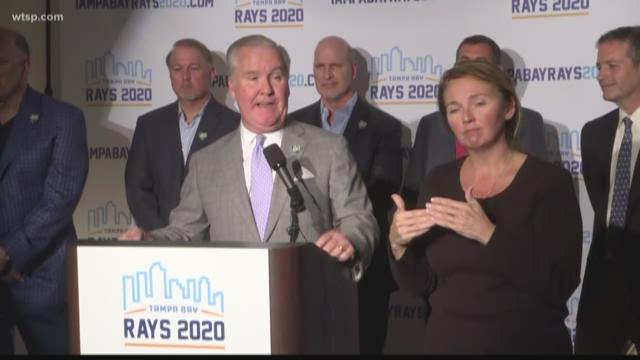 TAMPA, Fla. - If the Rays are going to get a new stadium somewhere in Tampa Bay, it's clear from what local politicians and columnists are saying -- it will cost taxpayers a pretty penny.

Now we've seen several of them suggest residents won't have to pay for the public subsidies. This is nonsense.

Here’s a guide to how "not your tax dollars" really are your tax dollars, with some educated guesses as to how much each potential funding mechanism might contribute toward a new Rays stadium:

1.Hotel/bed taxes - $60-75 million: Your first hint that these are taxes? The word "tax" in the title. Yes, tourists tend to pay more of these than locals. And yes, state law restricts how you can use the dollars. But...

a. Despite what Hillsborough County leaders have tried to convince you, bed taxes can be used for more than just stadiums. They can be used for pretty much any event or capital expenditure that helps attract tourists to a specific Florida county - often, more successfully than pro teams.

b. The money can also be used for marketing your county, which apparently, Tampa is in need of, since a dozen downtown/Ybor-area hotels just added a marketing fee on top of the bed tax to make up for the lack of marketing spending.

2.Land - $15-30+ million: Any public giveaway of land for a stadium is a taxpayer subsidy. Consider the opportunity cost taxpayers could be missing out on through other uses of that land:

a. If the city/county were to simply sell a developer 15-20 acres of prime real estate near Tampa's downtown, the project might conceivably net the county upwards of $1 million per acre.

b. If the right development is chosen, as Commissioner Ken Hagan and so many others like to remind those around Tropicana Field, the land could net much more revenue and opportunity as something other than baseball.

c. Of course, any fee the county pays to acquire land will cost taxpayers too.

d. Then, there's the cost of relocating the facilities and/or residents that are currently there. For instance, the Tampa Park Apartments would require relocating hundreds of families. Or Hagan's idea of relocating the sheriff's office would mean tens of millions more for a new Hillsborough County Sheriff’s Office facility.

a. The biggest variable would be how the CRA is drawn. Some of Tampa's existing CRA's produce zero revenue, while others produce more than a million per year. This is why most CRA/TIF districts are pretty limited when it comes to future bonding capacities.

b. The only CRA currently producing significant revenue is the Downtown district, but the city and county have already committed $100 million from that CRA to Vinikville "Water Street Tampa" and surrounding development near Amalie Arena. So don't count on a new ballpark complex leaning on Vinik's money.

c. Again, these are real property tax dollars that could go to pay for anything else the city or county needed: roads, cops, sewers, etc. When the TIF district fails to produce the revenue projected, as they sometimes do, general revenue tax dollars typically have to make up the difference.

d. As Neil deMause recently wrote, incremental tax revenues "are generally pooh-poohed by economists as a subsidy by other means, since evidence shows that entertainment spending in one part of a metropolitan area just ends up being cannibalized from somewhere else."

e. Politically speaking, Hillsborough County commissioners recently fought over a CRA designed specifically for transportation improvement - they couldn't agree, and the county still desperately needs transportation money. Florida House Speaker Richard Corcoran is also trying to end CRAs, which could limit how much the county is able to actually bond out. So it’s far from a guaranteed source of revenue.

4.Entertainment district tax - $?? million: An additional sales tax could be added to bars, restaurants and hotels within a special district, giving the Rays a way to capture revenue from private businesses adjacent to their park. However, the city and county don't need a new ballpark to institute a new tax if they want new revenue; those funds could pay for important infrastructure or existing commitments like Water Street Tampa, or any of the city's other pressing needs that require raising taxes. So directing new revenues toward construction bonds does comes at the expense of other taxpayer needs. Ask Cincinnati what happens when you bank on sales taxes funding your stadium and the economy slows down.

5.Infrastructure considerations - $20-80 million: Hillsborough County has a problem in that it cannot afford the roads and transit it desperately needs. But committing to fund new roads and infrastructure around a downtown or Ybor City stadium would most certainly take away from the infrastructure needs elsewhere in the county.

6.Future development rights - $?? million: If Hillsborough County is to partner with the Rays, as St. Petersburg has proposed to do, any concession on future developments rights or revenues on public property is a taxpayer expense, even if it is deemed one with positive return on investment.

7.Naming rights - $40-50 million: Forget about any benefit from naming rights to that public stadium. The teams are quick to insist these are their revenues, contributing to their bottom line; not the public's portion of stadium bills.

8.Rental car taxes - $?? million: It's been a while since it was suggested rental car taxes could be raised in Tampa to help pay for a new stadium, and the Hillsborough Aviation Authority has since raised the rental taxes twice to pay for airport expansion. So even if this is no longer a likely source of revenue, it's worth repeating that it could most definitely pay for other things around the community.

Watch: Did Tampa's airport bet its future on a technology of the past?

9.Terms of a lease - $?? million: Will the Rays pay the county fair market rent, like most private businesses do that work out of a public space? Because anything short of market value is a concession taxpayers are making at the expense of general revenue dollars. It’s also worth keeping an eye on what kind of concessions taxpayers may have to make when it comes to stadium maintenance - a secret subsidy that adds up if public officials aren't careful in negotiations.

10.Property tax breaks or "Payments in Lieu of Taxes" (PILOTs) - $50+ million: Most businesses in Florida pay property taxes. When they don't, it comes at taxpayers' expense. While there are various forms of the PILOT mechanism, they basically allow a team to skip out on paying property taxes, because of silly reasons like, "they're paying their construction bills instead" or "because they're good community stewards." If only we were all that lucky!

11.Sales tax concessions on construction - $20-30 million: When a developer constructs a building, he or she pays sale tax on the materials. However, when pro teams build a stadium, they will often try to skirt paying those taxes by getting the municipality to purchase materials for them as a straw-buyer, tax-free. It's like a 16-year-old giving an adult money to buy beer. It's just shouldn't be accepted.

12.Tax-exempt bonds (federal) - $50-150 million: Just like giving private businesses a free pass on paying sales taxes, governments will often take out tax-free bonds on stadium construction, so they can be secured at lower rates than private businesses have access to. They're a better deal for pro teams because the taxpayers aren't getting their due revenues on the transaction.

13.New Markets Tax Credits (federal) - $?? million: These federal subsidies, designed to incentivize private businesses to move to and invest in low-income "distressed" communities, can be tapped into in a creative way to benefit stadium development without actually benefitting the communities the taxpayer is spending money to support.

14. Existing general tax revenues - $?? million: Do I even need to spell this one out? I shouldn't, but St. Petersburg has suggested spending several million dollars a year - on top of bed tax revenues and development rights - to keep the Rays in the 'Burg. Obviously, this money could be spent on police, roads or sewers.

You may also hear about foreign investment EB-5 funding as a possible mechanism on a new stadium, but the program's capacity is somewhat limited. It is short-term bonding only, not the 30-year kind of bonding the county would prefer for such a large project.

All-in-all, there's a good chance taxpayers would have to help pay for much of a new Rays stadium one way or another. Don't believe elected leaders who promise there "won't be another sweetheart deal" like the Tampa Bay Buccaneers got with Raymond James Stadium.

If you know a politician who could use some education on these matters, read Judith Grant Long's Public-Private Partnerships for Major League Sports Facilities.