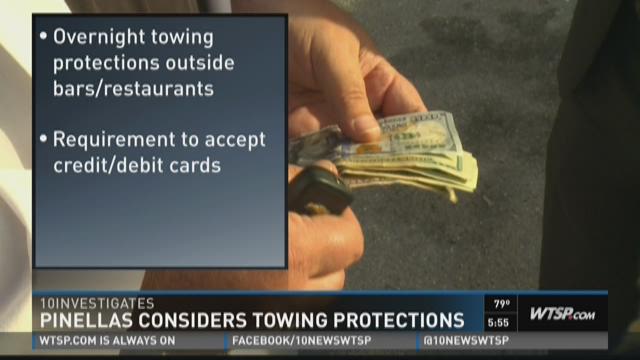 PINELLAS COUNTY, Florida - Following a series of 10Investigates reports on aggressive towing, the Board of County Commissioners advanced an ordinance Tuesday that would add a series of consumer protections to the county's tow truck ordinances.

Commissioner Charlie Justice worked with the county's Consumer Protection division on the proposal, which will next get a public hearing on Aug. 23.

Among the protections in the proposed ordinance is a measure to prohibit tow trucks from patrolling bar and restaurant parking lots overnight. It mimics a City of Tampa ordinance that's been in place since 2008.

"Concern over being towed may act to discourage intoxicated consumers from seeking alternative transportation, and places consumers in position to make a difficult choice," according to an analysis by county staff. "This change helps to protect consumers and our streets while still affording an avenue for necessary tows."

Pinellas County's proposed ordinance would also require wrecker companies to accept credit card payments from drivers who have been towed, alleviating one of the biggest consumer complaints regarding demands for cash. The City of St. Petersburg passed a similar ordinance in 2015.

And Pinellas County proposes to require tow warning signs to include a phone number for Consumer Protection, so upset drivers would know where to file a complaint. Currently, many towed drivers get frustrated by not knowing which local agency to contact for complaints.