Dog's eye removed after being rescued from licensed Georgia breeder

Local rescue groups took in 70 dogs, some with physical problems that they say were caused by neglect 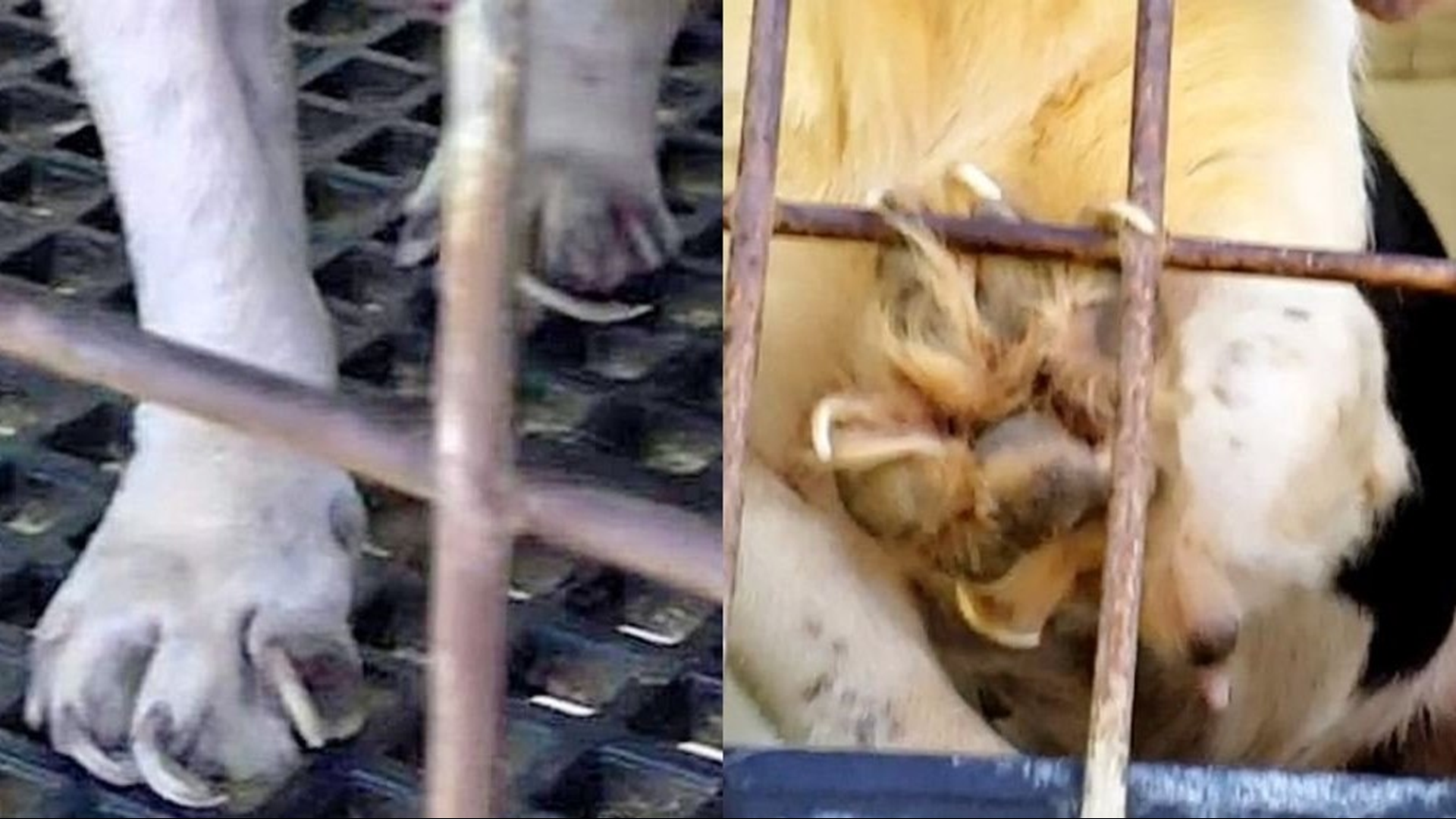 A south Georgia dog breeder advised by state inspectors to get medical care for nearly a dozen of his dogs has chosen to surrender them instead.

Animal welfare advocates want to know why treatment of the dogs was a suggestion - not a mandate - and why it didn’t come sooner. They also argue the breeder should be held accountable for failing to provide them medical care before their surrender.

The Long County breeder, whom 11Alive is not naming because they do not face any criminal charges or state violations, insists he takes good care of his dogs. According to the Georgia Department of Agriculture (DOA) inspection reports, he has more than 250 of them.

► PREVIOUS | Hidden in plain sight: Sick animals, a jawless dog and a system that missed them

Guardians of Rescue filed a complaint against the breeder after being allowed to remove about 70 dogs off the property. According to the local rescues now helping to care for the animals, some have been diagnosed with ear and eye infections, severe dental disease, and improper grooming.

The DOA visited the property before and after, within weeks of the complaint, and did not see any problems with the facility that might warrant a violation.

A veterinary medical officer with the DOA did note that 10 dogs had “dermatological clinical signs” of alopecia, dermatitis, dry/flaky skin and pododermatitis.

The doctor did not seem to notice the dog on the property suffering from an injury to his right eye. But an area rescue that took that injured dog shortly after the DOA’s visit has since paid for surgery to have the eye removed.

She runs Fixing the Boro, one of the rescues that is helping to care for the Long County dogs.

Lea Moore with Guardians of Rescue said it’s a conflict all rescues face. They don’t want to be seen as an easy out for breeders that refuse to properly care for their animals.

Moore wonders why state laws haven’t been used to mandate breeders to fulfill even the basics like cutting their nails, brushing their hair, and keeping their teeth clean to prevent gum disease.

But she said that she sometimes wonders if they also make the problem worse.

“Are we just opening up those cages to continue to procreate? We’ve done nothing but alleviate the burdens so that they can continue to pop out puppies in this terrible environment,” explained Moore.

Moore said Guardians of Rescue and Fixing the Boro alone have spent more than $2,000 caring for seven of the dogs and there are more surgeries planned.

The animals are spread across several rescue groups including Canine Pet Rescue in Dacula and Castaways Pet Rescue in Darien. Other rescues took animals but asked not to be named because they fear retribution.

The FBI started tracking cases of animal cruelty in 2016 alongside murder, armed robbery, and rape. But Georgia does not yet participate, making it difficult to track trends and assess how the state compares in enforcement.

Attorney Jessica Rock, who travels the state training law enforcement and animal control on how to recognize signs of abuse said there's only one solution.

“The only way we’re going to stop this is if people start taking it seriously," she said. "We start actually charging people with crimes like we should when the suffering rises to the level of, 'We’ve warned you once, we’ve warned you twice. We just can’t tolerate this anymore'.”

The problem that animal welfare advocates run into is that in order to give the final warning, someone must issue the first.