A licensed breeder in Long County surrendered 70 of his dogs to a rescue group. Some of them have serious health issues. Why didn't the Department of Agriculture notice a problem?

We’ve seen the cages, the fur filled with feces and enough before and after pictures from recent rescues to know some dog breeders don’t mind letting their animals suffer. But exactly what defines animal cruelty depends on who you ask. Here’s a look at one Georgia facility. You decide.

The floor in the licensed breeding facility in Long County is clean, the cages meet state requirements, there is shelter, ventilation and the dogs get food and water. Supplies are stored properly and there’s a working fire extinguisher.

In the eyes of state inspectors and animal control, the breeder, whose license is properly displayed, meets expectations.

But animal welfare advocates took one look at some of the animals removed from this property and asked how that’s possible. Humane Care is one category on the inspection sheet and, in their eyes, many of these animals have not received it.

Because the breeder does not currently face any violations or criminal charges, we are choosing not to name the owner or the name of the business.

But Sarah Roehm, who runs the pet rescue Fixing the Boro, said if we want to stop animal cruelty, we have to stop looking at the cages and start looking in them.

The Reveal Investigator Rebecca Lindstrom met up with Roehm and Lea Moore with Guardians of Rescue, on a vet visit in May.

Guardians of Rescue spent days negotiating the release of nearly 70 dogs and has paid to treat the sickest of them.  The organization is working with several licensed rescues to help get the dogs the care they need and into new homes when possible.

Guardians of Rescue is based in New York, but has started actively investigating and trying to stop cases of abuse in Georgia. They shared their pictures and experience with Lindstrom, believing animal cruelty is still being overlooked in our state.

Roehm said the owner surrendered this particular dog because she wasn’t feeding her puppies. Veterinarian Justin Card said it’s possible she couldn’t feed them, because of her filthy and matted fur.

“They’ll get these intertwined mats of hair where they’re basically impenetrable,” said Card, a doctor with Gateway Animal Hospital.

Darla’s hair was so tightly knotted, she had skin burns from her urine.

Vet reports for other dogs removed from the property list a dog that came in limping with severe arthritis, there are ear infections, an eye infection so severe it has yet to be diagnosed, flea infestations and Moore said about half of the dogs tested positive for heartworms.

Lea Moore showed us a dog she first thought had a mammary gland tumor.

“It turns out that it’s a hernia and her bladder is encased in the hernia. Fabulous. We just went from an easy surgery to one that’s far more complicated,” Moore said.

Roehm said a problem consistent with most of the dogs is dental disease. Vets believe Darla is only seven years old, yet she still needed 21 teeth removed.

Then there’s Garfunkel, a chihuahua that has proven a master at adapting to life.

“The jaw is actually gone. So, this is just what’s remaining of a bottom lip here. There’s no teeth in the bottom. It basically corroded and fell off.”

Or at least that’s the vet’s best guess. Roehm says the breeder didn’t give them any vet records when he gave up the dogs.

Lindstrom called the breeder to ask him about the concerns raised by the rescues. He insisted his dogs were well taken care of and explained many would have medical issues, because the dogs he surrendered were old.

According to the rescue groups, veterinarians treating the animals estimate nearly half of the dogs to be less than five years old.

After a long pause, the man responded, “You can, yes.”

“But would you?” Lindstrom asked.

“I’m not, well I… could if I thought it had to have its teeth cleaned, yes.”

Before Lindstrom could ask specifically about any of the dogs surrendered, he hung up and instructed her to send any other questions to his attorney.

Lindstrom called back a few minutes later asking for that contact information. He has yet to respond.

WHAT IS ANIMAL CRUELTY?

Moore said many of these medical needs are clearly visible to anyone walking by and believes all of the dogs were present the last time the DOA, or Department of Agriculture inspected the facility.

“Why the DOA didn’t see that on the 5th of March when they were there is kind of a mystery to all of us,” Moore said.

Instead, the report says the facility passed in every category, with the inspector going on to say, “all animals appear to be receiving adequate and humane care.”

“Somebody can be charged with animal cruelty if in fact an animal is suffering. It doesn’t say extreme suffering,” explained attorney Jessica Rock. 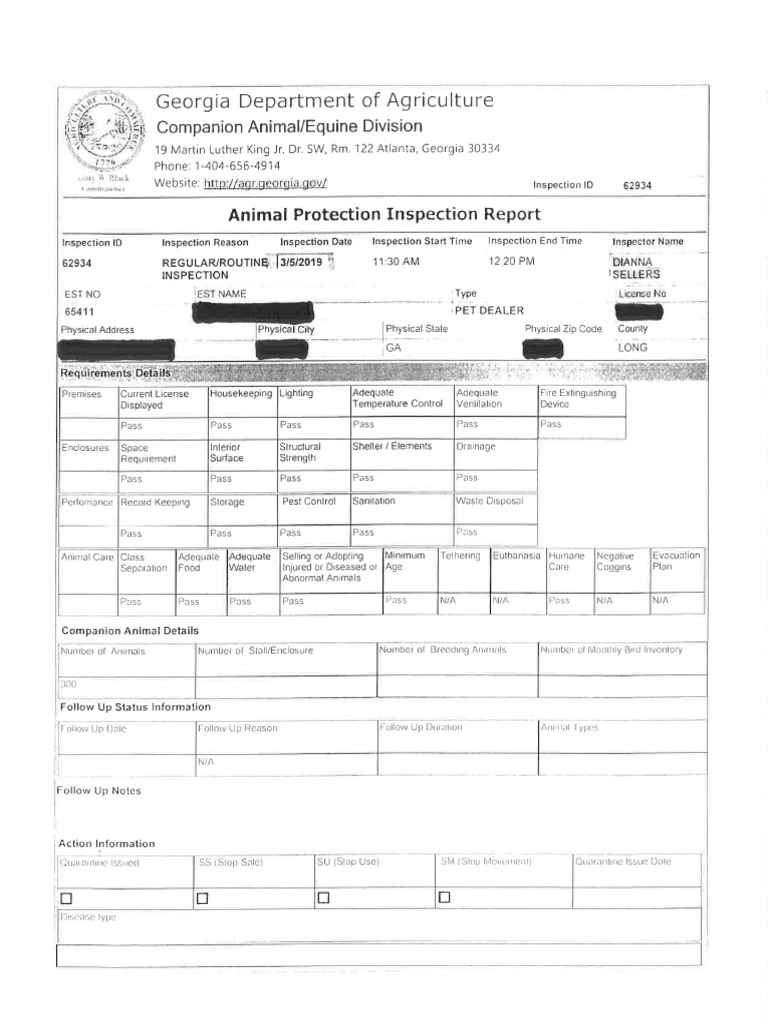 March DOA Report of Long County Breeder
The Reveal investigative series looks into how the Department of Ag, police, and rescue groups can go into one breeding facility and come out with completely different evaluations.

Rock helped write Georgia’s animal cruelty law and has prosecuted these kinds of cases for more than a decade. But her main focus is training inspectors, law enforcement and animal control to recognize cruelty.

“The only way we’re going to stop this is if people start taking it seriously, we start actually charging people with crimes," said Rock.

The DOA, animal control and a state veterinarian did go back to the property in April after Guardians of Rescue filed a complaint.

Records show they "discussed," “advised” and “strongly recommended” several things, but only required the breeder to get his remaining 250 or so dogs their rabies vaccination.

What is clear, according to the inspection report, is that the owner admitted he hasn't given his adult dogs a rabies shot in four or five years.

“The one vaccination that is absolutely required for animals in Georgia is a rabies vaccination,” Rock said.

Animal control can issue a fine if someone is found out of compliance, but the Long County Department of Public Health says unless someone gets bitten, there is no one checking vaccination records.

Breeders are required to keep records on all vaccinations given. Record keeping is also a part of DOA inspections, but it appears they don’t check the actual reports, because they never noted the lapse in rabies shots until Guardians of Rescue brought it up.

It's also up to the breeder to keep records regarding the sale, surrender, death or transfer of animals. Yet the DOA inspector reported, “adequate records are available and kept current” even though the breeder had no documentation for the animals given to Guardians of Rescue.

The investigation into the rescue group’s complaint was closed – unfounded. It’s now up to local law enforcement to decide if the breeder broke any laws.

In the past three years, the DOA has filed an administrative order against eight facilities, two of them breeders. While fines were listed in five cases, the agency has not collected any money. Instead, it has settled most with probation. Only twice did law enforcement get involved, going a step further to issue criminal charges.

► RELATED | Groomer pleads not guilty to charges she kicked, choked a dog to death

The other case is Reason Grey, the owner of Georgia Puppies, who voluntarily surrendered nearly 800 animals earlier this year.

So how can rescues, regulators and law enforcement visit the same breeder within days of each other, but walk away with entirely different opinions on what they saw?

“It’s the lens and the perspective that they go in there with and what they understand to be a violation or a crime,” said Rock.

That lens is inconsistent.

When the DOA asked the Sheriff and District Attorney in Montgomery County to prosecute Angela Powell for animal cruelty, the evidence was ruled insufficient.

It wasn’t until someone posted information about the condition of the dogs on social media, that law enforcement reconsidered its position.

Inspection records reveal inconsistencies in even the DOA’s own enforcement. In March, it issued an administrative order against Happy Chihuahua, a breeder in Stockton. It threatened a $10,000 fine, in part because the business failed to clip the dogs’ nails and remove the mats in their fur.

The business requested a hearing to appeal the order. The DOA says an agreement has been reached, but the order is not yet public. Regardless, it shows proper grooming can be a violation of state regulations.

“The mats can actually get so tight and so heavy they will literally start pulling the skin away from the animal’s body,” explained Rock. “Often times there’s a lot of sores, infections in those sores.”

But grooming was never mentioned by those that inspected the facility where Darla and nearly 70 other dogs were removed.

Groomer Cindy Mooney says she had to completely shave almost every dog that came to her, and their nails were so long, some were crossing each other or curling to the pad.

“That throws off the way they walk, it’s very painful for them,” said Mooney. “It would have to be no one touching the nails for months and months and months. They actually curl in the pad and then they start growing into the meat of the pad which is very, very disgusting."

These are the rescue groups that helped care for the dogs from this particular breeder: Guardians of Rescue, Fixing the Boro in Statesboro, Canine Pet Rescue in Dacula and Castaways Pet Rescue in Darien.

*While one inspection report lists the name of Mark Murrah, the program coordinator, it appears his report is that of the veterinarian that was on scene, not of Murrah himself.