11Alive's investigative team took complaints about multiple Georgia cemeteries to the Secretary of State. Here's what he had to say. 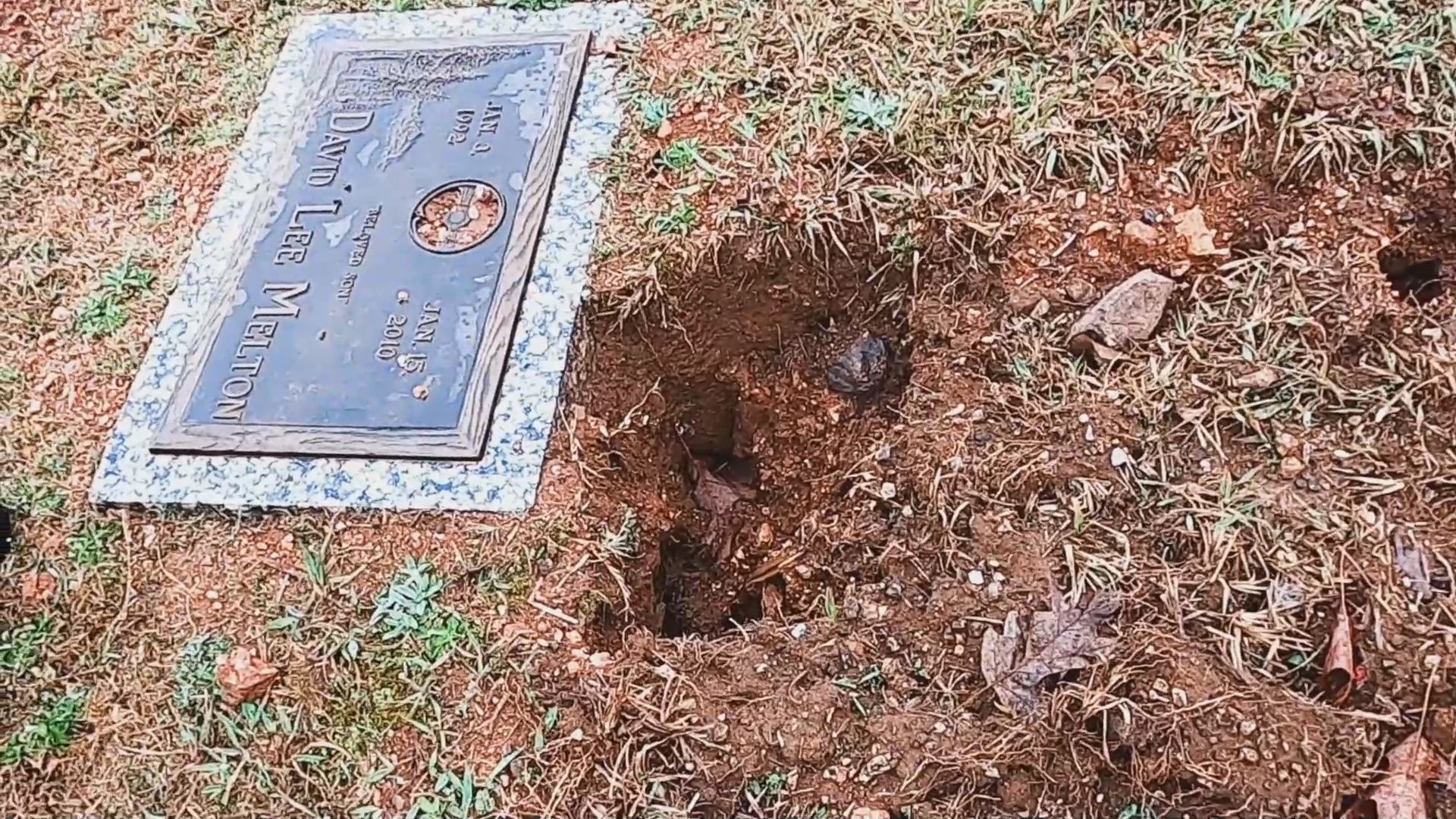 The state inquiries were trigged by an 11Alive Reveal investigation involving StoneMor, Inc., a publically-traded corporation that owns more than 300 cemeteries in dozens of states.

Many of the complaints have been documented by families of loved ones burred in the cemeteries in a Facebook group over the past three years.

The cemeteries at the center of investigations include Oaknoll Memorial, Floyd Memory and Sunset Hill Memorial. Almost weekly, some of its nearly 1,000 members post pictures of toppled headstones, sunken graves and exposed caskets.

“It’s a constant nightmare for families, and for people who have loved ones resting here - or should be resting here,” said Barbara Penson, the Floyd County’s Clerk of Superior Court.

RELATED: Georgia grandmother goes missing from her grave; her family is furious

"I was very upset, emotionally drained, couldn’t believe my eyes,” Penson described while standing in front of the headstone that has since been repaired.

Looking around, it didn’t take long for Penson to point out more recent damage, including multiple headstones bent with tractor tire markings on them.

A few miles away, Jimmy Gibson pointed out more damaged graves at the Floyd Memory Gardens cemetery the same day, another property owned by StoneMor. “I don’t think they know it’s this bad,” Gibson explained.

The Facebook group was created shortly after Gibson’s father, James William, was buried there in 2018.

Three days after the family thought they said their final farewell to William, StoneMor called to say they mistakenly buried him in the wrong plot and he needed to be moved.

REVEAL INVESTIGATION: Covered in feces, man died of dehydration in Georgia jail 'that looks like a friggin horse stall'

Gibson told 11Alive when he arrived at the cemetery, workers had already dug up his father’s casket, which was hanging from a tractor above the gravesite.

“You thought you had done had your final goodbye and it’d just like…no, you’re going to go through this again,” Gibson said.

Gibson’s sister, Sonia Vinson, said she still has nightmares about it.

“After that, I would wake up in the middle of the night and I just wanted to go get him,” Vinson explained.

11Alive's investigative team, The Reveal, shared the Facebook group page and other material with Georgia Secretary of State Brad Raffensperger’s office on March 1, 2021.

In less than a week, the state said its inspectors were on-site interviewing property managers and assessing the damage at all three StoneMor properties.

“[Our] attorneys saw the Facebook page and thought it was pretty egregious,” said Noula Zaharis, the director of the state’s Securities and Charities Division, which oversees cemetery investigations.

“We suspect they knew we were coming,” Zaharis said.

On March 24, The Reveal shared additional pictures and video of cemetery damage during an interview with Raffensperger.

“Well, obviously, the death of your parent or any loved one is an extremely emotional time, and it’s really important that have the care of their loved ones, that it’s done properly,” Raffensperger said.

The state confirmed it now has active investigations into all three StoneMor Rome cemeteries.

“We can level charges, and we will after we finish up with our investigation,” Raffensperger vowed. “We hear [families'] concerns and we share their concerns.”

According to Raffensperger, StoneMor could face financial penalties or even criminal charges.

While Secretary of State investigations often take months or a year to conclude, the state said it expects to take action much faster.

The last time the state reprimanded StoneMor was in 2005, but it’s unclear what the company was accused of doing at the time because the state said the case file no longer exists.

StoneMor declined to be interviewed, but in a statement to The Reveal wrote that “[It] acknowledges the conditions of our Georgia cemeteries and apologizes for not fulfilling the expectations of the families we serve.”

The company promised over the next 60 days they will be committing additional resources to the Rome properties, including potentially purchasing new equipment and hiring more staff.

Complaints surrounding StoneMor cemeteries stretches beyond Rome. According to its website, StoneMor owns 313 cemeteries in 26 states.

In 2019, it faced a now dismissed class action lawsuit that claimed wide-spread neglect.

The Pennsylvania Attorney General sued StoneMor in 2020 for alleged deceptive business practices. It settled out of court. The company never admitted fault.

Penson said she doesn’t believe StoneMor will fix the problems in Rome. She’s now considering taking the company to court herself.

“I think now maybe a lawsuit is gonna have to be filed,” Penson said.

The Georgia Secretary of State’s office restructured the way it investigates cemetery complaints in January 2020, the day after The Reveal published a story about a cemetery accused of over-selling burial plots in the Rome area.

The change moved the oversight from its offices in Macon to Atlanta and under the Securities and Charities Division.

“Using internal resources, Raffensperger will reassign an attorney, an examiner, and an analyst to work within the Securities and Charities Division. This team will help ensure Georgians are protected and will have a strong mandate for investigation and examination,” said a press release announcing the change.

Previously, complaints were sent to the board of cemeterians which would then decide whether to investigate or not. The securities division can immediately begin investigating complaints.

Since the restructure, the Secretary of State’s office said it has seen an increase in cemetery complaints. Over the past year, it’s launched 44 investigations. About half involve care and maintenance issues. The other investigations involved registration and filing issues, operations and alleged fraud.

To report a complaint about a cemetery, the Georgia Secretary of State said the public can contact its office directly: 470-312-2640 or email: cemeteries@sos.ga.gov.

The Reveal is an investigative show exposing inequality, injustice, and ineptitude created by people in power throughout Georgia and across the country.

MORE FROM THE REVEAL:

'Something needed to be done': Ga. lawmaker files bill in response to man who died begging for help in county jail