Kentucky is on the verge of hitting 3,000 deaths due to the virus. 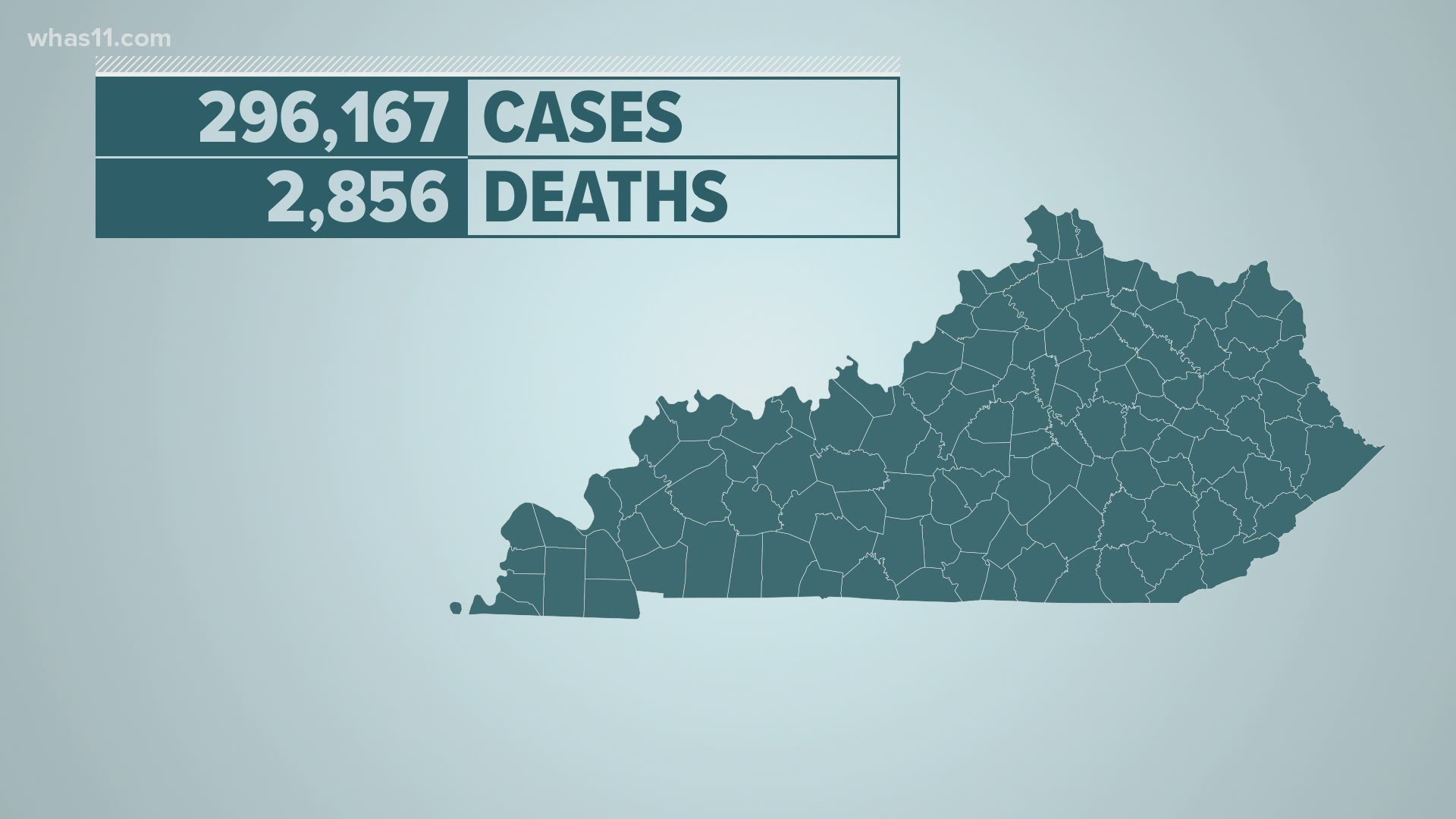 FRANKFORT, Ky. — This is a weekly blog with daily updates on COVID-19 numbers and other related content in Kentucky for the week of January 4, 2021. Governor Andy Beshear is scheduled to give live updates on Monday, Tuesday and Thursday at 4 p.m.

“This is everywhere, and we all have a duty to fight back against it,” Gov. Beshear said in a video update on Facebook.

A total of 2,876 Kentuckians have died from the virus.

The state’s current test positivity rate is 12.32% which the highest it has been since May, the governor said.

The state's positivity rate remains at 11.9%.

Beshear was joined by Commissioner of the Kentucky Department for Public Health Dr. Steven Stack. Stack detailed the state's vaccine plan including going through each tier '1A-4.'

Credit: WHAS-TV
Here are the phases COVID-19 vaccines will be given in the state of Kentucky.

Stack again stressed the importance of using all available vaccine and the goal of administering 90% of all vaccine received in the state within seven days of arrival.

In using the vaccine as it is available, Stack said local health departments must follow state guidance on administration but noted that counties may jump tiers if vaccine needs to be used in that week time frame.

During the brief, Governor Beshear went on the offensive on House Bill 1 that was discussed in the Kentucky General Assembly Thursday.

HB1 which has been described as a "reopen the commonwealth" plan. If passed, it would allows businesses to reopen if they follow CDC guidelines and post information.

Beshear said that the bill contradicts itself and would potentially shutdown Kentucky if passed.

"House Bill 1 may be requiring a shutdown of Kentucky." said Beshear. "During a surge, we shouldn't give away our ability to respond to support from the federal government."

A reoccurring theme of the brief was the cause of the recent surge. Beshear's report points to potential holiday gatherings as the reason but both Stack and the governor indicated that more data needs to be examined before knowing definitively.

"We'll really need to see the data in the coming days," said the governor. "It's dangerous out there."

Additionally, Beshear said no plans to shutdown have been made with the current positivity rate. He cited that as data comes in, more examination needs to take place.

"It is now clear that we are seeing an escalation related to holiday gatherings. This is not the time to make it harder to react to this virus when it may be surging again," Beshear said. "We have to have the tools to fight back."

Around 1,700 Kentuckians are currently hospitalized with COVID-19, and 217 of them are on ventilators. Jefferson County reported 683 new cases alone.

Gov. Andy Beshear reported the highest-ever daily count of COVID-19 cases with 5,742 new cases. Beshear also indicated that the positivity rate is at the highest since May 5 at 11.7%.

Additionally, 34 new deaths were reported due to the virus, bringing the statewide death total to 2,806. The statewide total of positive cases is 286,578.

“Today’s numbers show how critically important a centralized effort and response is to defeating this virus,” Beshear said.

Gov. Beshear postponed the State of the Commonwealth and Budget Address following events at the U.S. Capitol Wednesday.

Gov. Andy Beshear reported 1,781 new cases of COVID-19 on Tuesday, a low he says not seen on this day in quite some time.

However, he said the state’s positivity rate of 11.4% is cause for concern but more of that data is needed, especially from Christmas and New Year’s holidays.

Within those numbers reported, Jefferson County also confirmed 314 new cases of the virus.

Twenty-three more have died from the virus, including three elderly patients from Jefferson County.

The state also hit a milestone with 3.5 million Kentuckians that have been tested for the virus.

The state has received most of the vaccines it was supposed to get in December and another 27,300 Pfizer and 26,500 Moderna first-dose vaccinations will be received this month, he said.

The governor believes more will be available as they continue to get staff and residents at long-term care facilities vaccinated.

Beshear also warned the public not to believe what you see on social media regarding the vaccination. He said those are vaccinated will need the shot as well as the booster – the two doses recommended for the vaccine to be effective.

The state has spent more than $47.7 million to expand and enhance contact tracing processes.

Carter said tracers have successfully contacted more than 94,000 who were exposed to the virus which helped prevent spread. He said the efforts have also prevented more than 2,000 hospitalizations and 400 deaths.

Here is a breakdown of data collected provided by officials:

Carter did say there has been an issue with pushback against contact tracing but said his staff has overwhelmingly have been able to talk to people and help them understand what they are at risk for and what they can do to prevent and protect themselves along with their loved ones.

He also spoke about the challenges preventing contact tracers from reaching those who have been exposed to COVID-19, including delayed adoption of the statewide system and a dramatic increase in cases which overwhelmed health departments across the Commonwealth and slowed the time between exposure and being called by a contact tracer.

Gov. Andy Beshear says holiday gatherings could be pushing up the state’s positivity rate as he announced 2,319 new COVID-19 cases on Monday.

He mentioned that the closure of testing sites during the holidays may also be a contributing factor but needs analyze the data further.

Beshear said he was concerned with holiday gatherings during Christmas and New Year could contribute to a jump in cases in the weeks ahead.

Kentucky lost another 26 people to the virus including a 95-year-old woman and two men ages 72 and 78. This bring the overall total deaths from COVID-19 2,749.

Four regions located in the southern and eastern portions of the state are currently in the red zone when it comes to hospitalizations. Beshear said 1,737 people are currently hospitalized with 456 in intensive care and 216 placed on ventilators.

The governor said he isn’t happy with the pace the vaccine is being distributed across the state. He says that there is a reported lag in vaccinations. Beshear said long-term care facilities and health care organizations are supposed to report vaccinations within a 24-hour period but some facilities have not been doing that.

The governor said once they get a good system going, they expect to have vaccine numbers reported daily. For now, that will just happen on Mondays.

Based on December numbers, about 206,650 vaccines were allocated but Beshear said it doesn’t mean the vaccines aren’t coming.

Since 174,000 vaccines have been received by long-term care facilities and health care workers, about 60,414 have been vaccinated.

Credit: WHAS-TV
Here are the phases COVID-19 vaccines will be given in the state of Kentucky.

Dr. Stack said the end goal is to administer 90% of all vaccines received in the state within 7 days of their arrival.

Kentucky has reported 279,143 positive cases of the virus since the pandemic began last March.