4 people killed in fiery crash on I-70, semi driver arrested

JEFFERSON COUNTY, Colorado — The semi truck driver, who Lakewood police said caused a fiery crash that killed four people, has been taken into custody on four counts of vehicular homicide, according to Lakewood police.

A total of 28 vehicles, four semi trucks and 24 passenger vehicles, were involved in the crash on eastbound Interstate 70 at Denver West Parkway in Lakewood.

The crash was reported at around 4:50 p.m. Thursday, according to Lakewood Police Department Agent Ty Countryman. He said a semi-truck traveling eastbound collided with multiple cars, and that at some point, a vehicle ignited and the fire spread.

Both directions of I-70 between 6th Avenue and Denver West Parkway reopened around 8 p.m. Friday.

Due to the nature of the crash, the identities of the deceased and most the injured victims have not been released.

"We got to get a count of cars to people and then we can kind of go from there as far as unaccountable and who the drivers were," Countryman said.

A total of 10 patients with injuries related to the crash were seen at St. Anthony Hospital, a spokesperson for the hospital said Friday. According to Lakewood police, six civilians were transported by ambulance to the hospital from the scene. Police received reports that additional injured victims were taken to the hospital by good Samaritans.

One woman, Leslie Maddox, is still in the hospital, the spokesperson said. She's in good condition.

RELATED: 'I'm lucky to be alive': I-70 crash victim credits 2 passersby with saving her

RELATED: 'So many people willing to help': Nurse recounts immediate aftermath of I-70 crash

One West Metro firefighter also suffered minor injuries when he was hit by debris, according to the department. It may have been from a tire that exploded.

The West Metro Fire Fighters IAFF Local 1309 said in a Facebook post that the injured firefighter was at home, resting comfortably and is expected to return to duty sometime next week.

The driver of the semi truck has been identified as Rogel Lazaro Aguilera-Mederos, 23, of Houston, Texas, according to Lakewood police.

"Those charges are stemming for interviews and evidence that was gathered overnight, " said Lakewood Police Department Agent Ty Countryman.

Police do not believe that alcohol or drugs played a role in the crash, and instead said the semi-driver failed to slow down as he approached stopped traffic for some unknown reason.

"He [ Aguilera-Mederos] loses control of the vehicle coming down I-70," said Countryman. "He can't stop, doesn't stop, and he ends up colliding with several cars, and, as a result of that, the fire ensues, and we have what everybody saw from the videos."

A local YouTuber that goes by the name "Burger Planet" captured the moment a semi sped by him toward where the accident took place.

Sky9 video showed piles of lumber on the highway, multiple semi-trucks and at least two SUVs on fire beneath a bridge over I-70.

Diesel fuel from at least one of the semi-trucks was on fire, as well as the spilled lumber, according to West Metro Fire PIO Ronda Scholting.

Semis, vehicles on fire on I-70 near Colorado Mills 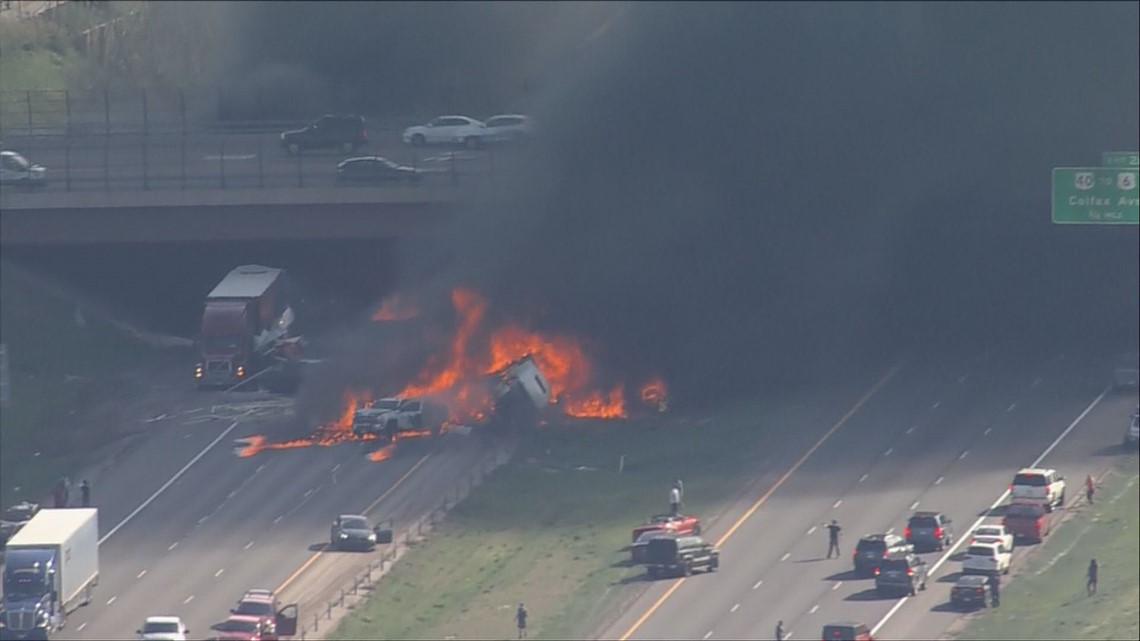 This fire was just a few miles away from a crash involving a semi-truck and a school bus that snarled the eastbound lanes of the highway at roughly the same time.