When Keith Roles started offering treats to passing dogs, he had no idea how popular he'd become 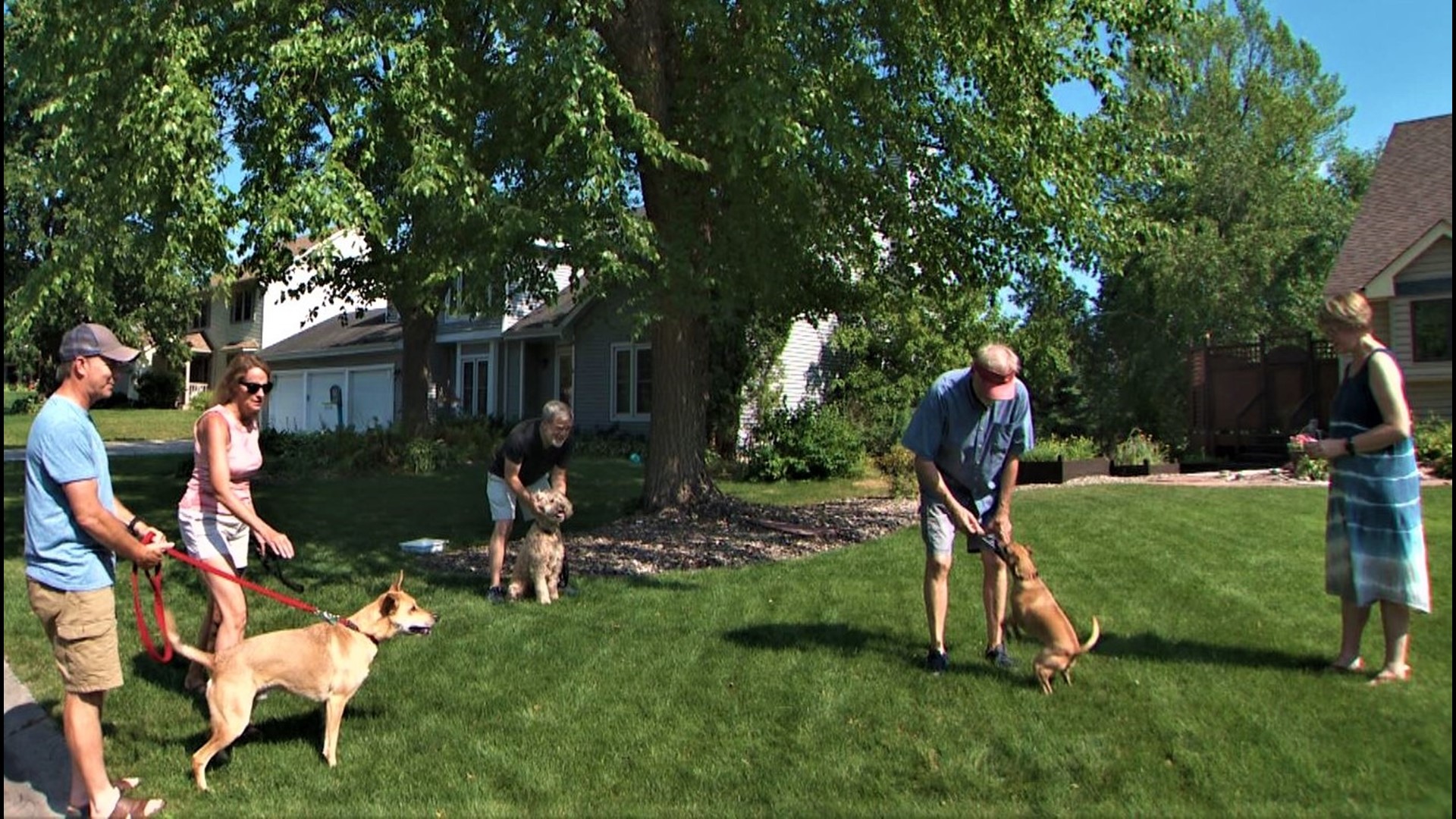 They are small prices to pay for a four-pawed phenomenon taking place on a front yard in Apple Valley.

“I can hardly control them coming down the hill,” Amy Austin says as she pulls back on the leashes of her two exuberant dogs, Nora and Molly.

Who could blame the dogs for being eager?

They’ve found their own slice of heaven on a front yard down Durham Way.

Credit: Chad Nelson, KARE
Joe Fawbush and his daughter Evie hold back their 5-month-old dog Sylvie as she heads to Keith Roles’ yard.

Keith Roles would have it no other way.

Keith and his wife Linda were still relatively new to the neighborhood, when Keith started passing out dog treats from his yard and during his twice-daily walks through the neighborhood.

It didn’t take long for the recipients of Keith’s generosity to know a good friend when they saw him.

“I’ll be out the front door just watering the plants, and dogs will just come up, they’re pulling their owners,” Jennifer Strub, who lives across the street from Keith, says. “If you lose your dog, that’s where you’re going to look first.”

On a recent evening, a half dozen dogs with their owners shared company in Keith’s yard.

Credit: Chad Nelson, KARE
Keith Roles offers a treat to a neighborhood dog as others await their turns.

As some left, others arrived, making Keith’s yard a sort of hound central station.

Neighbors say the gatherings are especially welcome after COVID-19 separation and the bitter elections that, in some cases, fractured friendships.

“Whether we have time to stop or not, they make sure we do,” Christine McCahn says with a glance at her two excited dogs, Bear and Cooper.

Keith upped the ante with dog a named Lucy who often sits in the window waiting for Keith to pass by.

Lynn recently took a photo of Lucy sitting on the stoop in front of the Roles’ front door when Keith and Linda were away.

When the Roles aren’t home, dogs and humans have been known to assemble in the yard anyway.

“When I grew up, people got together and visited, and just kind of popped in on people, and it wasn’t announced,” Linda says. “Well, that’s kind of what’s going on here. It’s really brought everyone out of their houses.”

The parade of leashed visitors mean Keith and Linda go through large boxes of dog biscuits.

Not a problem, as neighbors make sure the Roles are well stocked.

“They’re delivered to our door, so it doesn’t get any better than that,” Linda says.

Despite his obvious love of dogs, Keith hasn’t owned one in years.

Besides, Linda says, “They’re all our dogs, we get to enjoy them all.”