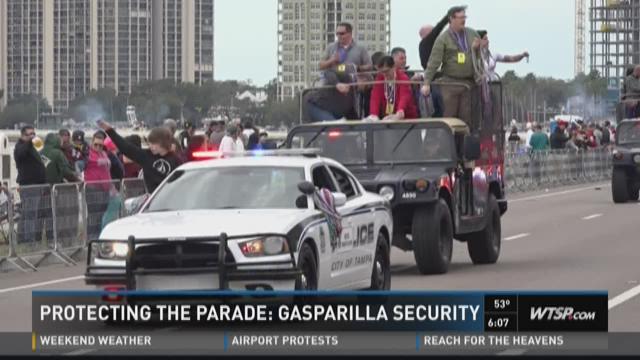 TAMPA, Fla. (WTSP) -- The Tampa Police Department is prepared for just about anything as the Gasparilla parade sets sail Saturday.

With thousands upon thousands of people at the event, it takes team work to ensure every single one of them stays safe. More than 21 agencies work security for Gasparilla.

Along the parade route, you'll see dozens of police officers in uniform, but there are many more dressed in plain clothes or even wearing pirate costumes.

"That's the key," Tampa Police Chief Eric Ward said. "Having those plain clothes guys that can get to that person before they have the opportunity to carry out whatever they're planning."

Well before the pirates invaded, the Tampa Police Department set up a command center at its headquarters downtown. It has dozens of computers and a wall of televisions, showing surveillance camera shots from along the parade route.

"These are the eyes and ears behind the scenes," Ward explained. "They're able to identify potential threats and have officers respond to those threats and take the most appropriate action."

They're looking for threats on the ground, as well as on social media. From police to fire rescue to the coast guard, they have a response plan in place for almost every scenario.

"Communication is always the first thing to break down in any major incident, so having a solid communication plan in place prior to and throughout the event is paramount," Ensign Eric Riley of the United States Coast Guard said.

All of the agencies have seen what can go wrong at other major events around the country and the world, such as the attack in Nice, France, where a terrorist drove a truck through a large crowd.

"We take those, and it's lessons learned," Ward said. We take those incidents and try to learn from them so we don't make the same mistakes."

Police chiefs from all over the country visited the command center, so they can take what they learn from the Tampa Police Department back to their cities.

According to Tampa Police, as of 5 p.m. on Saturday, arrests related to the Gasparilla festivities collected by Tampa Police came out to a total of eight. Those arrests included disorderly intoxication, public urination, disorderly conduct, possession of an open container, criminal use of a personal ID, battery, and two arrests for possession of cocaine.

Tampa Fire Rescue reported a total of 35 medical transports -- one of which was a trauma alert.