Lifesavers was honored by the American Foundation for Suicide Prevention for work with faculty, students, and the community. 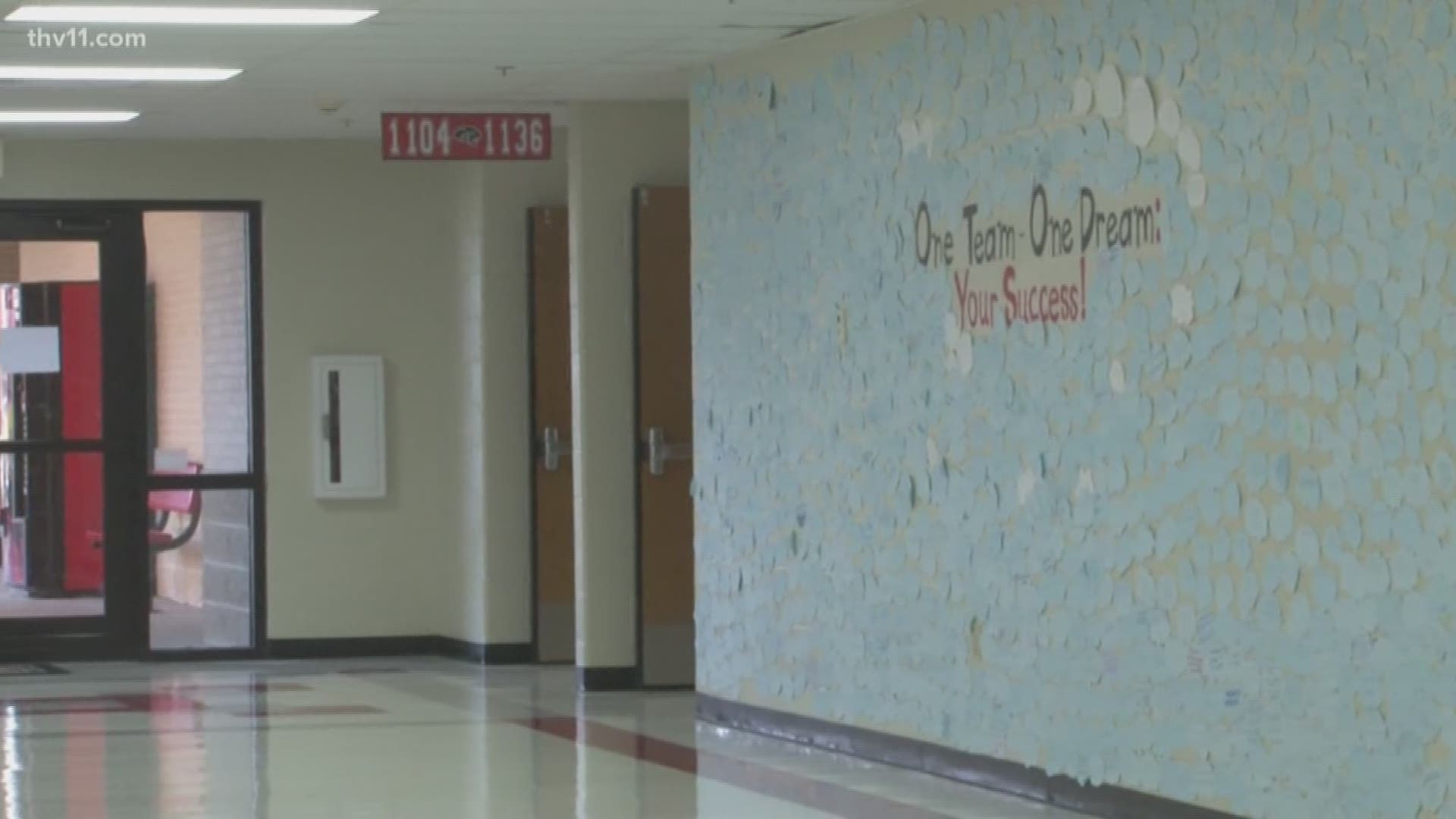 CABOT, Ark. — A Cabot High School student group has earned a unique recognition for its efforts to prevent suicide.

According to Cabot Public Schools, the Lifesavers group became the first high school group in the United States to be recognized by the American Foundation for Suicide Prevention.

The club was formed in 2018, shortly after Jeanette DeJesus was hired as a school counselor.

Gracie Goshien and Lyra Gibson were two of the group’s first members.

“I’ve thought about this before, getting a group together like this,” Goshien, a junior, said, “because a lot of us struggle, you know, inside, and nobody wants to talk about it. And then, Miss DeJesus came to me and was like, you know, what do you think about being a part of this group and stuff?"

“And I just felt like this was a great idea. You know, a lot of people are scared to talk about it, or they don’t, they’re not comfortable," Goshien added. "And with being a group, and we’re all peers, and we’re all the same age, so we all kind of get it. I feel like that was a really great idea to communicate our feelings.”

“Not everybody wants to talk to adults,” Gibson added. “You want to talk to your friends. And so, I think being able to reach out to your friends. She saw that. She saw that and that’s something that we could do, and that we could make into a—not really a secret society, but something where we’re not, like, having to showcase it entirely, but we’re just being, like, those little lights across the campus.”

DeJesus helped lead the students through ASIST training to help the recognize the signs of depression and suicidal tendencies and provide care to classmates in need.

“It’s intimidating to just want to ask those questions, but not really be able to,” Goshien admitted. “But you just have to know that we’re going through this too, so like, we’re not here to nit-pick at you. We just want you to open up and talk to us, you know?”

“The students that we trained, they said they felt more confident,” DeJesus stated. “Not that they felt happy to go do it, but they felt better. They felt like they had the tools to be able to help somebody.”

The group completed a series of community, faculty, and student tasks that earned it recognition by the AFSP by the end of the 2018-19 school year. Alex Hopper, a senior who graduated in 2018, led the effort. As a group, the Lifesavers hosted a community event, featuring experts from AFSP and partnered with a local church to host safe talks.

Barbara Miller, Cabot’s lead counselor, designed shirts for students that said "I Am Enough" on the front and included the number for the National Suicide Hotline on the back. Students then made even more of them to distribute at Carlisle High School.

"It's not a Cabot problem, it's not a Carlisle problem,” Lauryn Dixon, a senior, said, “it's not an Arkansas problem. It's nationwide, it's worldwide. And there are people who've struggled. There are people that have gotten better, and they can take inspiration from that."

Dixon is one of many students who decided to join Lifesavers this year. While 15 students made up the initial group, DeJesus said 110 signed up this week.

“Just how many people signed up blows me away,” senior Lexi Griebel said. “So, it just makes me feel good that other students on campus actually really do care about this club and want to be a part of that.”

“It’s important to know that you’re not alone,” senior Madison French said, “and so I think this club’s, like, really good, and I totally would’ve joined last year, but I didn’t know about it.”

Dixon, French, and Griebel all said personal experiences led to their interest in Lifesavers and a desire to help prevent suicide.

“I lost my boyfriend to it,” Griebel said. “And it was just a path that I walked. And it was hard, and it was a journey, but I have come to know that there is hope in that, and you can always go to your friends if you don’t feel comfortable, or you don’t want to go to an adult about it, and just talk with someone that’s about your age. So, Madison was that person for me, and she stood by me the whole time."

“Whenever I saw this club, I just really knew that that was something I wanted to do. I just want to help others who are out there and who have been affected by it, or who’s dealing with depression and things like that, because I know I’ve been through it and I know I can talk someone through it and be that person to walk by them through whatever they’re dealing with," she explained.

“We lost somebody really close to us,” Dixon added. “Our whole family was completely devastated by it. And I never want to have to feel like that again, and I don’t want anybody else to feel that way. So, I want to help prevent whoever’s suffering and help prevent them from doing something to hurt others.”

French said she and the other Lifesavers want to make suicide and depression more comfortable topics to discuss. “I don’t think it’s talked about enough,” she stated. “People don’t feel like they don’t have someone to go to. And I feel like being alone is what brings on most of people’s thoughts and stuff. And so, I feel like this club is something really good, because it’s, like, telling people that they’re not alone. There are people to talk to.”

Talking with students during their low moments is an important part of their mission, but the Lifesavers want it to be a small part. “I think a lot of us want to be able to prevent anyone from being in that place,” Gibson said. “So, not just coming in and being with people who already feel lonely, but just taking the initiative and making sure that people don’t get to that place. And making sure that people aren’t, like, counted out of anything, but that we’re all that same.”

Gibson said they will focus on the small kindnesses that can make a big difference in someone’s mood. “I mean, it’s amazing what a simple smile and wave at somebody can do,” she said. “Like, if somebody just, like, smiles at me in the hallway, it makes my day! Completely. I love that. Or if somebody says hi.”

“You never know what somebody’s actually feeling,” Goshien added, “so, like, just that simple ‘hey.’ Or asking, ‘how are you?' Not just because it’s something you say.”

The Lifesavers plan to organize a group to walk in the Out of the Darkness walk in Little Rock in November and want to create a community walk about suicide awareness on campus in the spring. They also are considering hosting a theme night during a Panthers football game, putting up a table at local festivals, and holding fundraisers to pay for more ASIST training classes.

The model for the group has started to spread to Carlisle High School, but the Lifesavers believe they are the spark of something much bigger.

“I hope it spreads all over,” Dixon said. “I hope that, everywhere, somebody somewhere is watching this, going, other people are struggling too. It’s not a Cabot problem, it’s not a Carlisle problem, it’s not an Arkansas problem. It’s nationwide, it’s worldwide. And there are people who’ve struggled. There are people that have gotten better, and they can take inspiration from that.”

“I know a lot of people want to help, they just don’t know how,” Gibson added, “and they don’t know where to start. And so, I think starting this group is a great way for people to be like, okay, if I join this, this is where I can take my first steps. This is where I can help out the community, even if I didn’t know how to start by myself, like, there’s a group that you can join that can help you make a difference."

RELATED: Adulting is hard, but this Arkansas school is setting up its students for success

“And so, it feels amazing to know that there’s a lot of people we’re going to help, not even get through that dark place, like, they’re not even going to have to touch that to get help. Like, we’re just going to be on that front end and we’re going to be helping, whether you feel lonely or not,” Gibson said.