Chaos erupts in Pa. Senate as GOP blocks a Democrat from being sworn-in due to election debate

The GOP voted to temporarily remove the Lt. Governor to block the swearing in of Sen-elect Jim Brewster. 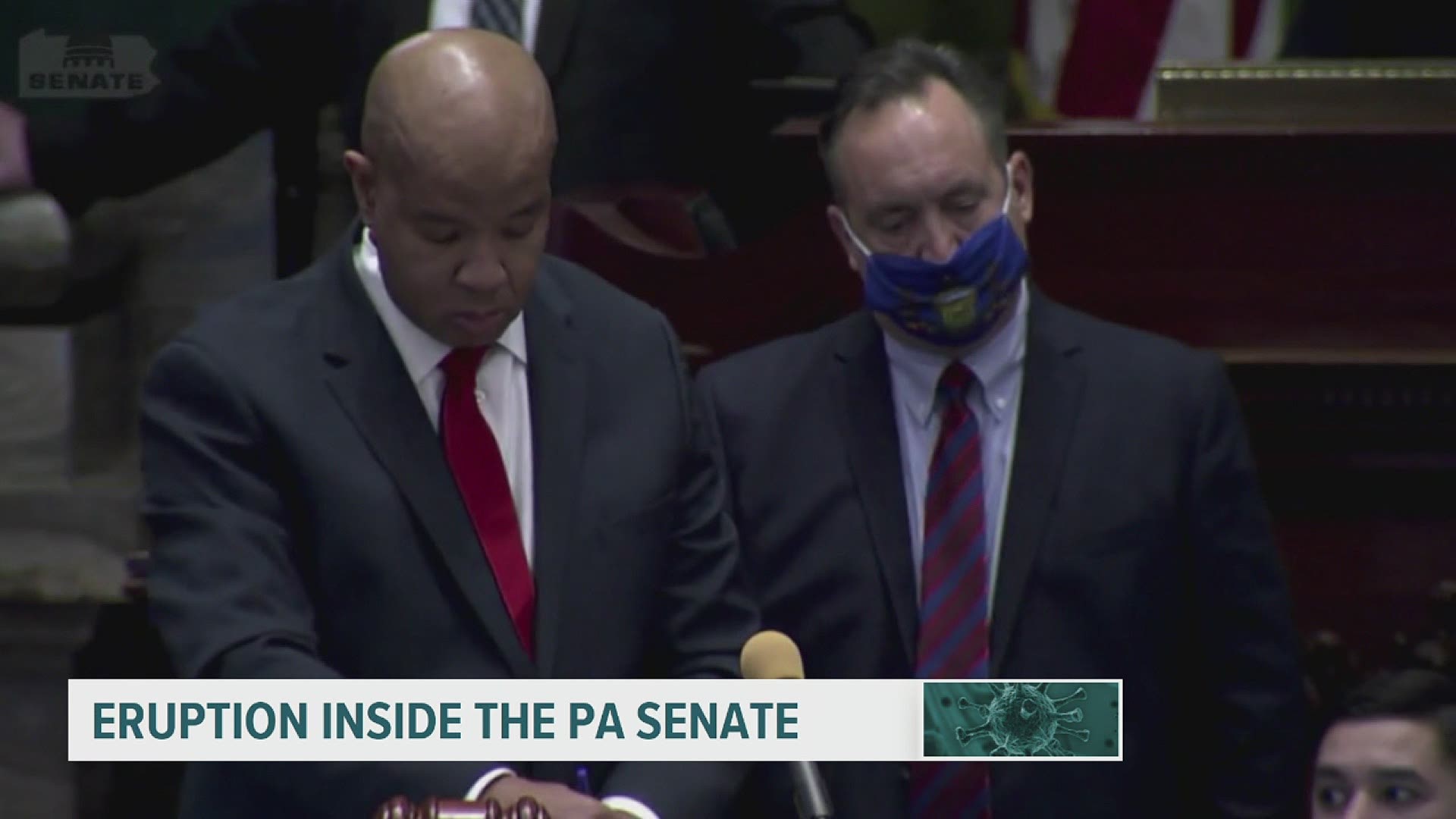 Pennsylvania's Lieutenant Governor John Fetterman was temporarily forced out of presiding over the state Senate Tuesday as tempers erupted and Republicans sought to block a newly-elected Democrat from being sworn-in because his election is being challenged by his GOP opponent.

Jim Brewster won his election to the 45th district by 69 votes and his win has been certified by the state. However his Republican challenger Nicole Ziccarelli is contesting the win because she and her supporters want 311 mail-in ballots thrown out that had missing dates on the outside envelopes. The 45th senatorial district includes parts of Allegheny and Westmoreland counties.

"The Republicans believe the election is not over yet. We clearly believe that I won the election. There's no doubt about that. A number of different court renderings have said that," said Brewster to FOX43, who later added "the courts have ruled that they must be counted."

"We thought in fairness to both Sen. Brewster and Nicole Ziccarelli that we not seat anyone and let the members the time to make the best decision moving forward," said Republican Sen. Jake Corman, President Pro Tempore.

This is moments before @FettermanLt was removed from rostrum as Senate GOP blocked swearing in of Sen. Brewster whose election has been certified, but is challenged by his GOP opponent. @fox43 at 4, hear from Brewster and Fetterman #ElectionResults https://t.co/OpRObowzx9 pic.twitter.com/eQ462xuGTU

Here's more of the fiery moments as @FettermanLt was removed from rostrum as Senate GOP blocked swearing in Sen. Brewster whose election has been certified but is being challenged by his GOP opponent. @fox43 at 5, hear from Brewster & Fetterman #election https://t.co/ymbvhUt9mU pic.twitter.com/btVVHfkycS

RELATED: Pa. Senate GOP leaders say they will delay the swearing in of Allegheny County Representative

Democrats objected to Republicans blocking Brewster's swearing in ceremony as they noted the recent court ruling and the fact that the results have been certified. That is when tempers began to flare as Republicans voted to temporarily oust Lieutenant Governor John Fetterman from presiding over the Senate for blocking their efforts to stop Brewster's swearing-in to the Senate. The Senate then proceeded to swear in other members but not Brewster, leaving the future and representation of the 45th district in limbo.

.@FettermanLt removed from rostrum as Senate GOP seeks to block swearing in of Sen. Brewster whose election has been certified by state. Here’s what Fetterman just told me about it @fox43 #ElectionIntegrity #elections #ElectionResults2020 pic.twitter.com/NYzS9kcdOF

"We are in a dangerous time now politically as a country when one party is acting as if they are entitled to acknowledge who wins and who loses and who gets seated or not," said Fetterman to FOX43.

Fetterman claimed even if court cases would go against Sen. Brewster, Brewster would have willingly stepped aside to allow his opponent to be seated.

He once again contested any accusations that the elections in Pennsylvania were not fair and accurate.

"The truth of the matter is even though the President lost in Pennsylvania, the Democrats fared terribly down the ballot," he said, noting that a challenge to the election results would also challenge Republican wins in the state.

Here's @SenatorBrewster, the man @ center of the PA Senate controversy today. His election has been certified but challenged by his GOP opponent. Republicans in Senate temporarily removed @FettermanLt as they blocked swearing in Brewster @fox43 #election https://t.co/ymbvhUt9mU pic.twitter.com/Ansn90D8Yi

Secretary of State Kathy Boockvar did release guidance in September saying “a ballot-return envelope with a declaration that is not filled out, dated, and signed is not sufficient and must be set aside, declared void and may not be counted.” However, the Pa Supreme Court ruled in November, that an un-dated ballot may be counted.

Corman said in a press release "Ziccarelli’s position is that Pennsylvania election law is entirely clear that voters must sign and date their mail-in ballot to be counted.. She argues that a bipartisan coalition of legislators and Governor Wolf agreed on this important integrity and anti-fraud provision, and that his Secretary of State Kathy Boockvar provided clear and consistent instructions to county election boards.”