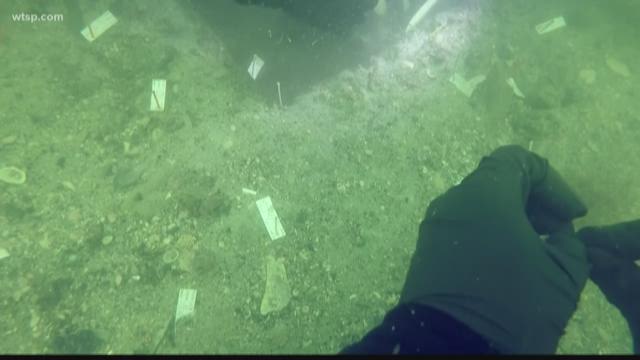 VENICE, Fla. -- A burial site hidden for some 7,000 years beneath the surface of the Gulf of Mexico likely has archeologists picking their jaws up from the floor.

As Dr. Ryan Duggins, an underwater archeology supervisor for the Florida Bureau of Archeological Research put it, in part: "Seeing a 7,000-year-old site that is so well preserved in the Gulf of Mexico is awe inspiring. We are truly humbled by this experience."

A fossil hunter while on a dive in 2016 reported possible human skeletal material off the coast of Manasota Key in Charlotte County, Florida. State officials explored the site in the years since and announced Wednesday, Feb. 28, the site is, in fact, a 0.75-acre Native American burial site in a peat-bottomed pond, according to a news release.

The only known examples of submerged offshore prehistoric burial sites are known to be in Israel and Denmark.

Researchers say the water level in the Gulf of Mexico 7,000 years ago was about 30 feet below compared to today. It's likely the pond at the time was on dry land about 9 feet above sea level.

It's believed ancestors of Florida's indigenous people laid their family members to rest at the site.

Now a known part of history, state officials are working to determine how to best manage the site to protect and preserve it.

"As important as the site is archaeologically, it is crucial that the site and the people buried there are treated with the utmost sensitivity and respect. The people buried at the site are the ancestors of America’s living indigenous people," said Dr. Timothy Parsons, the director of Florida's Division of Historical Resources.

It is a first-degree misdemeanor in Florida to remove artifacts from an archeological site without authorization, and a third-degree felony to disturb or vandalize an unmarked human burial.

The site is monitored and patrolled by law enforcement, the news release states.