Florida’s minimum wage is increasing in 2018, but is it enough? 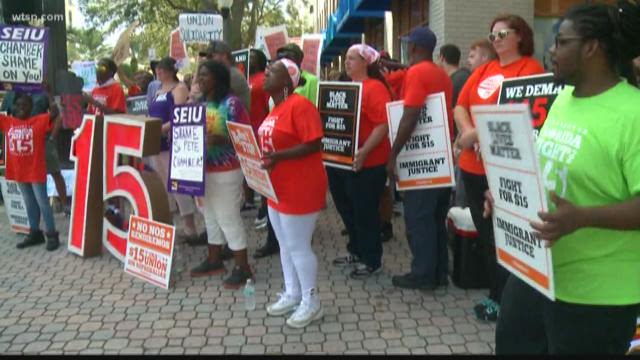 People from all around the U.S. will be ringing in the new year with a raise.

The minimum wage is going up in some states and cities, including here in Florida.

The annual calculation is based on the percentage increase in the federal Consumer Price Index for Urban Wage Earners and Clerical Workers in the South Region for the 12-month period prior to September 1, 2017, according to the DEO.

Alex Harris, 21, who is responsible for paying most of his family's bills on a minimum wage income, says the raise will do little to help, but at least it's a start.

Harris has been fighting for better wages, with the group "Fight for 15."

"We've been struggling most of our lives, we're just barely getting through,” says Harris. “Our goal is to stop depending on the government, but it's very hard when they're only giving you $8 an hour.”

“It needs to be at least $11 or $12. What is happening is that people on the bottom of the economic latter are the ones that are hurting,” says Nelson.

Employees who are not paid the minimum wage may bring a civil action against the employer or any person violating Florida's minimum wage law.

The state attorney general may also bring an enforcement action to enforce the minimum wage.

FLSA information and compliance assistance can be found at: https://www.dol.gov/whd/flsa/.