Chauvin was placed into handcuffs before being led out of the courtroom. 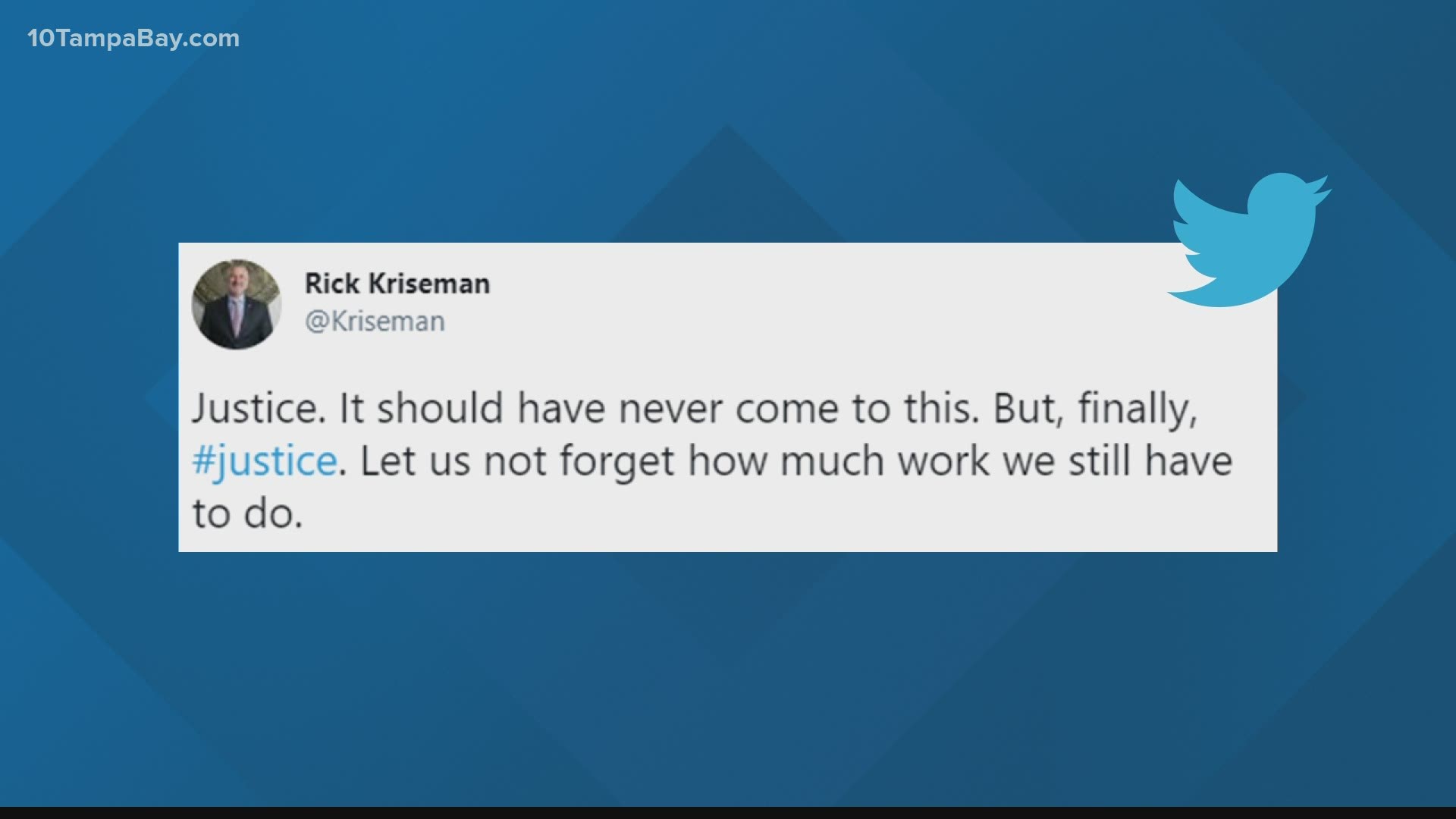 MINNEAPOLIS — Former Minneapolis Police Officer Derek Chauvin has been found guilty by a 12-person jury of all three charges in the death of George Floyd.

Moments after the judge confirmed with each juror their decision to enter the final verdict, Chauvin was placed in handcuffs before exiting the courtroom.

Now, leaders across the greater Tampa Bay area are reacting to the verdict in one of our nation's most high-profile cases.

President Biden and VP Harris call the Floyd family after the GUILTY verdict! Thank you @POTUS & @VP for your support! We hope that we can count on you for the police reform we NEED in America! ✊🏾 pic.twitter.com/cg4V2D5tlI

Former President Barack Obama: The 44th president of the United States said the jury "did the right thing" in a post to Twitter.

Today, a jury did the right thing. But true justice requires much more. Michelle and I send our prayers to the Floyd family, and we stand with all those who are committed to guaranteeing every American the full measure of justice that George and so many others have been denied. pic.twitter.com/mihZQHqACV

Justice. It should have never come to this. But, finally, #justice. Let us not forget how much work we still have to do.

Hillsborough County Sheriff Chad Chronister: The sheriff said there "will never be justification" for the murder of George Floyd.

There is, and never will be, justification for the murder of George Floyd at the hands of former Officer Derek Chauvin. Derek Chauvin does not represent the character, integrity, and honor of the thousands of men and women of the Hillsborough County Sheriff's Office... pic.twitter.com/MHoRyj4pz2

Rep. Val Demings: “Justice has prevailed. But this is not a happy day, because this day never should have happened. George Floyd’s life mattered, and but for the tragic actions of Derek Chauvin, Mr. Floyd would be alive," she wrote in part.

"A verdict can't undo the tragedy of last summer, but this decision can ensure that George Floyd's life was not lost in vain. His death is prompting the law enforcement profession to evolve across our country."

Hillsborough NAACP President Yvette Lewis: The Bay area leader says the verdict means that justice has been served and that justice will prevail.

'IT GIVES US HOPE': @HCBNAACP reacting to former Minneapolis Police Officer #DerekChauvin being found guilty of all 3 charges in the death of #GeorgeFloyd.

"There is justice out there. It may not be here in #Tampa, but it's out there" @10TampaBay #DerekChauvinTrial pic.twitter.com/CnSsbUm0Ae

Congressman Charlie Crist: "Keeping space in my heart today for the family of George Floyd, the people of Minneapolis, and Black Americans across the country as justice has finally been served in this case," he said in part.

Keeping space in my heart today for the family of George Floyd, the people of Minneapolis, and Black Americans across the country as justice has finally been served in this case. Read my full statement below. pic.twitter.com/YjXArGNjx3

Rep. Kathy Castor: The congresswoman called the verdict "accountability for [George Floyd's] wrongful death." She also called for the George Floyd Justice In Policing Act to be signed.

The George Floyd #JusticeInPolicing Act must be signed into law. https://t.co/d5gtd6YibK

USF President Steven Currall: In a letter to the university community, Currall wrote, in part, "As the trial of former Minneapolis police officer Derek Chauvin for the murder of George Floyd has concluded, we are all seeking to process this significant moment in American history and what it means in terms of our nation’s commitment to equity and justice."

We are all seeking to process this significant moment in American history and what it means in terms of our nation’s commitment to equity and justice. https://t.co/WSABu0CE3f

Orange County Sheriff John Mina: The Central Florida sheriff says he understands that people will still want their voices to be heard but asks they peacefully assemble. He also called the actions that led to George Floyd's death "indefensible, unexplainable and criminal."

Here is @SheriffMina’s statement on the #guilty #verdict in the Derek Chauvin trial. pic.twitter.com/8V58ZdP8VN

“Today, jurors confirmed that Derek Chauvin’s actions caused the death of Mr. George Perry Floyd Jr. For the majority of law enforcement officials in this country, this doesn’t come as a surprise. Chauvin’s conviction is a reminder to all who wear a badge that we are not above the laws which we swore to protect. Chauvin’s lack of empathy and compassion and his brutality set off a firestorm across the world but moved the consciousness of America like never before. I am hopeful that Floyd’s death and the criminal trial will bring about continued positive change, social justice and equitable judicial outcomes for all people. At the Broward Sheriff’s Office, we shall remain a national leader in police reform. We are committed to continuing to strengthen relationships and increase trust between law enforcement and the many diverse communities we serve.”