Reporter Steve Jefferson spoke to the pair after they left the courtroom Monday and walked through downtown Minneapolis with their fists raised high. 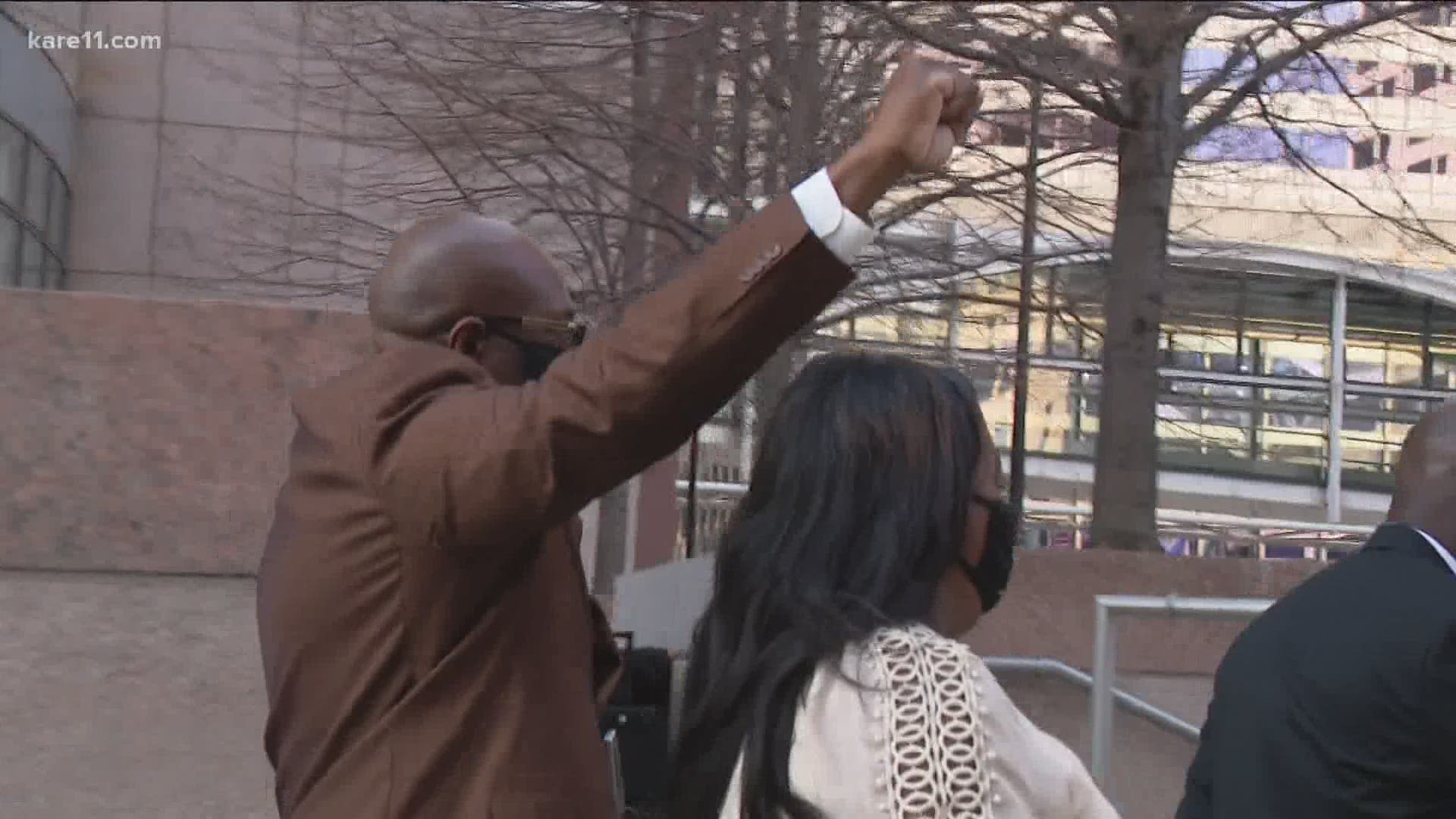 Philonise Floyd, George Floyd's brother, was in court on Monday, along with civil rights attorney Ben Crump. Reporter Steve Jefferson spoke with the two men on Monday evening, after they were recorded leaving the courthouse in downtown Minneapolis with their fists raised in the air.

Steve Jefferson: Well, I'd like to ask both of you, first of all, what do you think of the Minneapolis police chief telling the court that Derek Chauvin did not follow department policy during the encounter with George Floyd?

Philonise Floyd: I think he did right. He got up and spoke about what he, what he has seen in the video, he seen nine minutes of torture. The people in the video also stated the same facts that he stated, the man was tortured to death, and he should still be here. That is not proper policy. That is not the protocol that they follow. He [Chauvin] should be incarcerated, he should be convicted. And the other officers that helped him do it, they should all be convicted with him.

Jefferson: Attorney Crump, how do you feel about the chief saying he didn't follow the policy for the department?

Ben Crump: You know, I thought it was a riveting and explosive demo that completely destroys the defense saying that he was following proper protocol. You know, hopefully, you will always have police officers come and tell the truth. Because we all saw the truth in the video. And we are so riveted that you actually have police officers coming into court room telling the truth against officers who killed a Black person, that it is something that is repugnant to us when it should be normal. It really should be normal that when you see this type of injustice happen on video, there should not be anybody saying, 'Oh, let's pick out a way to assassinate the character of the unarmed restrained Black person.'

Philonese Floyd left the courthouse with family attorney Ben Crump as passersby responded to their fists in the air for several blocks downtown. For the full recap of today at court, head to https://t.co/e8xmwLSIvL. #ChauvinTrial #GeorgeFloyd pic.twitter.com/Iy15O4DqB0

Jefferson: Let me ask you, gentlemen, after court today, you were walking in downtown Minneapolis, with your fist up and you got responses from the people in this city. Responding positive? How did that make you feel?

Floyd: It made me feel wonderful. I just think about all the things that happened across the nation, so many people have stepped out. It's been it's been a pandemic, COVID is is killing people, but people out fighting for their lives. They are out here doing things that they don't have to do, because you know, they can stay at home. But my thing is, people put their lives on the line for what was right. And you have so many individuals that I'm grateful for. So I walk down the street with my hand held up high to show everybody that I was thankful. And we will have to do this again, not just for George for others across America, because this is the never ending cycle. That's the way it's looking.

Jefferson: Attorney Crump, how did that make you feel?

Crump: It made us know that there are people who believe that equal justice should be the norm, not the exception. And the fact that you have so many people who are saying until we get justice for George Floyd, none of us can breathe. Black, white, brown, red, everybody is saying this was wrong.

Floyd: I'm taking it one day at a time. I talk to my family and we pray on a lot of different things. And we have faith that we will get a conviction, this system would never break my faith. I'm here with one of the best lawyers ever put foot in a civil rights courtroom, you know this is the man. He just you know, he and I, he can talk to me about so much. And also Mr. Al Sharpton and Congresswoman Sheila Jackson Lee. You know, it's just different people who are up and different levels that I never thought that I would be able to meet these people, man. They took me through it. Show me what was going on. And I just pray and I just pray that that everybody will understand that we will get justice.

Jefferson: Attorney Crump, how are you preparing?

Crump: You know, there are times when client really helps me the path and for loaning us his faith, as well as his humanity. He always talks about all of us coming together. And despite how disappointed you may be, that they're assassinating the character of this Black man who is his brother, if he can try to say 'it's about unity,' then we all should follow his lead. It is about unity. And so that's how we're preparing for this verdict, that we're going to be unified and dignified. The gods tasked with George Floyd would have wanted that, and that's what Philonise Floyd wants.

The full interview with Crump and Floyd can be viewed below:

RELATED: MPD chief, head of training testify Chauvin's use of force on Floyd was against policy