Mayor Jacob Frey says 'phased' reopening of 38th and Chicago has begun, will not give exact timeline

Minneapolis city workers and trucks were removing barriers at George Floyd Square Thursday morning, an area that's been closed to traffic for more than a year. 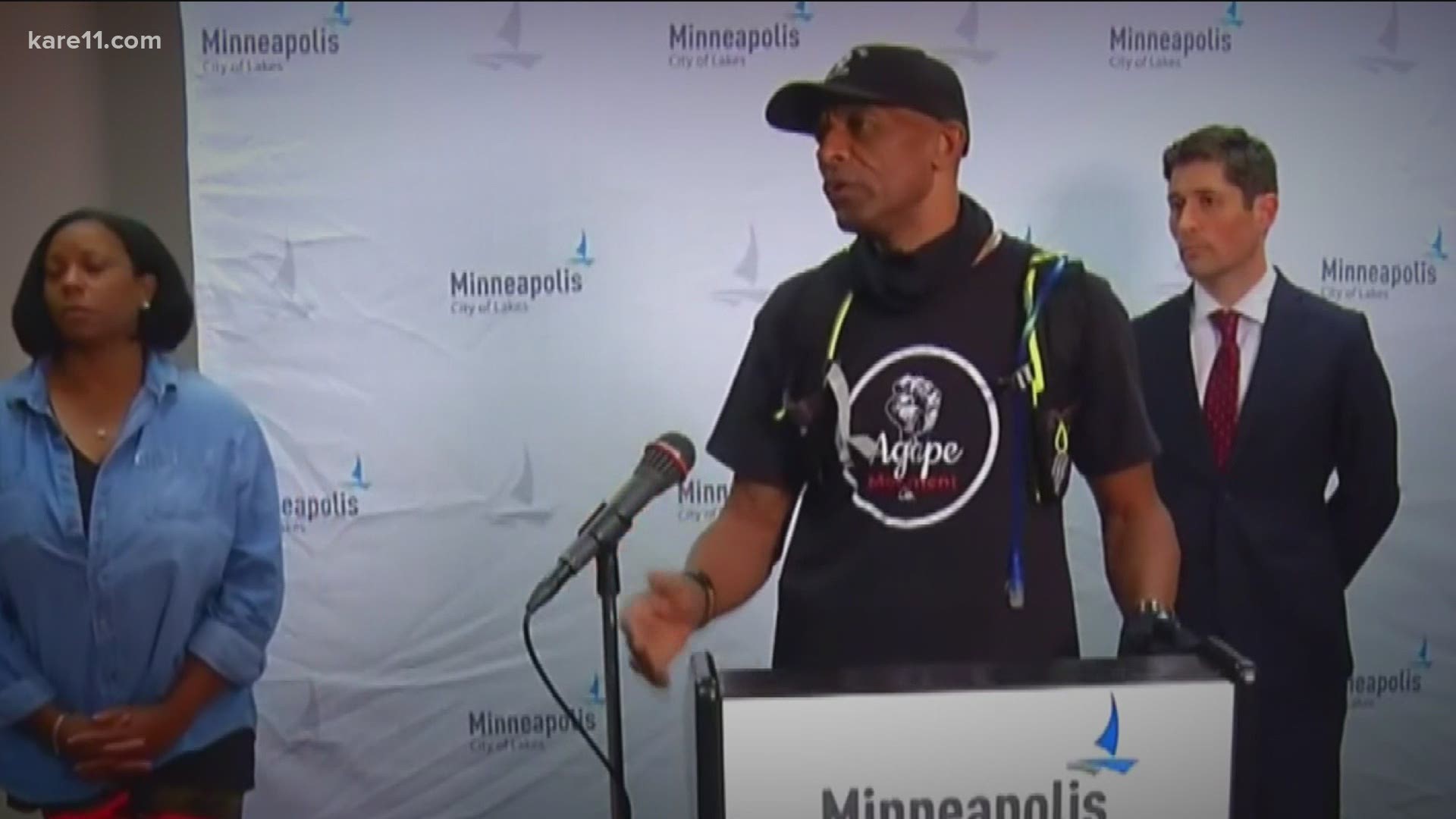 MINNEAPOLIS — Mayor Jacob Frey announced Thursday afternoon that the reopening of 38th and Chicago, the intersection where George Floyd was murdered, has begun.

The intersection has been closed to traffic for more than a year. A memorial has grown there since May 25, 2020, honoring George Floyd and others who have lost their lives at the hands of police.

Frey held a news conference Thursday at 1:30 p.m. with city council leaders and Agape Movement, a nonprofit that has provided support and security to the community at the intersection, now dubbed George Floyd Square.

“Thanks to some really amazing leadership from Agape, with the strength and resilience of community members and businesses, we have now begun the reconnection of 38th and Chicago,” Frey said.

The mayor said the reopening will be phased and done in tandem with community partners. He said the intersection will not be opened to traffic immediately and that "next steps" were taken on Thursday morning.

Some community members on the ground pushed back against the city's initial actions, choosing to ignore those efforts by creating their own barriers. Traffic remain halted on Thursday afternoon, just as it has for the past year.

Chaplain Kelly Sherman-Conroy of the Twin Cities Interfaith Movement said people at 38th and Chicago were caught off guard by the city's removal of barriers and debris.

"Emotions were pretty high," she said. "How do we go about this in a way that brings in that healing, and brings in the voices of the people that live here, so that they feel like they’re being heard?”

Frey told the public it will not be the end of the memorial site.

Frey also said the city wants to ensure that the exact site of Floyd's death "never has tires run over it again."

Minneapolis City Council Vice President Andrea Jenkins said the community, along with Agape, initiated the removal of the barriers.

“There have been a number of opposing viewpoints on what should happen at George Floyd square,” Jenkins said.

RELATED: Neighbors speak to the heart of the movement unfolding at George Floyd Square

She added that city leaders have reached out to community members directly and virtually to gather feedback.

The council vice president said she has heard from neighborhood residents about “loss of revenue, loss of sleep, loss of liberty."

"People feel like they are begin trapped in their homes," Jenkins said.

Gov. Tim Walz was attending a COVID-19 vaccination event Thursday at the Minnesota Zoo, but addressed the reopening in a press conference.

"At this point in time, it appears that there's conversations happening in and around that area with a respectfulness to the nature of the spot where George Floyd had died, but also understanding that public infrastructure needs to be opened back up in a way that works," Walz said.

KARE 11's Kiya Edwards reported Thursday morning that the work stopped as a crowd began to grow and tensions escalated. Some that gathered were visibly upset, telling crews to leave the intersection.

Edwards said a small fight soon broke out, and said the environment was "not calm." A spokesman for Agape told her residents within four blocks of the intersection were informed that removal of barriers and the reopening of streets would happen sometime after the Derek Chauvin verdict, but did not provide a specific date.

Steve Floyd, the co-founder of Agape Movement, told the public at the news conference that his organization knew there would be pushback on the reopening of the square. He said recent gun violence, including shootings of children, accelerated their urgency.

"We're still standing on the fact that we have to change our community, we have to develop our young men in the community," Floyd said.

He said they've been gathering input from the community, and believed that it was time to reopen the square together.

The City’s three guiding principles for the reconnection of 38th and Chicago have been community safety, racial healing and economic stability and development for Black, Indigenous, Latinx, Asian and other communities of color. The Agape Movement brought together community leadership to begin facilitating the phased reconnection this morning, with the City playing a supportive role. We are grateful for the partnership.

We are collectively committed to establishing a permanent memorial at the intersection, preserving the artwork, and making the area an enduring space for racial healing.

Frey added at Thursday's news conference that the decision to keep police away from the morning work at the site was intentional, to avoid clashes with activists who oppose the reopening.

Several community organizations held news conferences Thursday, including Agape and CAIR-MN, the Minnesota branch of the Council of American-Islamic Relations.

Steve Floyd said at a separate news conference that his group, which has played a role in security and violence prevention at George Floyd Square, negotiated with the mayor, the police chief and the Minneapolis Office of Violence Prevention to coordinate a reopening of 38th and Chicago. He said Agape members have gone door to door collecting the opinions of neighborhood residents and business owners, and insisted most believe it is time to open the corridor to traffic.

"We wanted to make the statement that the community can open this up... the community should open this up," Floyd said. "They (the city) just wanted to add traffic so they can open up, and we can begin to move to a new normal, to build this community up the way it's supposed to be. Did we expect pushback? Yeah, we expected that."

Floyd also maintained that with the spike in violence on the city's north side, including the deaths of two small children caught in the crossfire, attention needs to be focused on that neighborhood.

He also corrected rumors Thursday that Agape works for the police.

"You don't get ex-gang members working for the police," he said.

On May 25, the city commemorated Floyd's death, and former Minneapolis police officer Derek Chauvin will be sentenced for his murder on June 25.

Minneapolis Police told KARE 11 Thursday morning that they were not involved with the removal of barriers and the reopening of the square, calling it a "community led project." But by 7:30 a.m. officers had started to gather in a church parking lot on nearby Bloomington Avenue, putting them in position to respond if the situation boiled over.

City leaders, activists and members of the community that have inhabited George Floyd Square have been at odds over the fate of the memorial and streets in the area.

"We will restore peace, safety and hope to 38th and Chicago -- our Minneapolis central neighborhood," Minneapolis Chief Medaria Arradondo said in March, announcing a new targeted policing initiative for the area.

The Hennepin County Sheriff's Office, the St. Paul Division of the Bureau of Alcohol, Tobacco, Firearms and Explosives (ATF), as well as the Minneapolis FBI are all involved in assisting MPD.

City leaders had said that the intersection would remained closed through the trial of Derek Chauvin, the former Minneapolis officer convicted of murdering George Floyd. Chauvin is still being held in prison, awaiting a sentencing hearing scheduled for June 25, 2021.

RELATED: George Floyd family starts fund to support the neighborhood where he was murdered

RELATED: One year after his death, the Twin Cities remember George Floyd with celebrations and somber reflection

RELATED: Minneapolis leaders hope to reach an agreement to reopen 38th and Chicago