Brunswick family loses everything in a fire, except a Bible

Everything was destroyed in the fire. Everything, besides Rachel's bible. 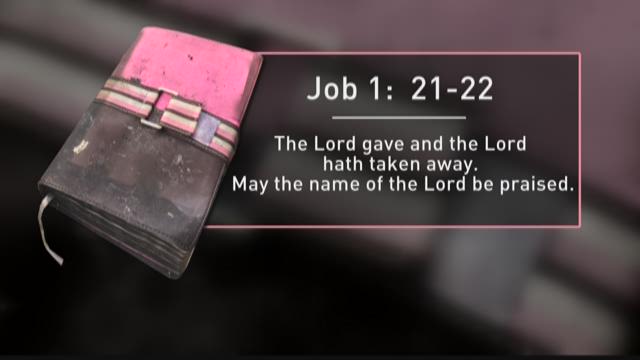 God works in mysterious ways. At least, that's what one Glynn County family believes after they lost everything in a fire, except a Holy Bible.

The fire happened on Belle Point Parkway in Brunswick last Friday. A family friend, Stephanie Levy, said Rachel was living at the home with her aunt and uncle, Carol and Phil Reese, while she attended college.

According to Levy, the aunt woke up to a loud noise that day. When she went to check it out, she found the back porch engulfed in flames.

Fortunately, no one was injured, but the fire claimed the lives of one dog, two cats and a kitten. The house was also a total loss.

A photo taken from Rachel's room shows how a fire that burned her Brunswick home last Friday, June 2, destroyed everything except her Holy Bible. Photo: Reese family.

The fire destroyed all of their belongings, except for Rachel's Bible, a gift from her mom when she graduated high school, Levy said.

"The firefighter recovered it," Levy said. "It was in her room. He showed it to her. She was amazed by that... She was very moved by that."

Against the odds, the Bible was sitting on Rachel's dresser surrounded by other books that were destroyed and turned to ashes. The Bible was charred, but overall, it was still intact; wet after fire crews sprayed down the home to put out the fire, Levy said.

A firefighter found Rachel's Bible surrounded by other books that were destroyed from the fire. The Bible appears to be charred, but in tact; Levy said. Photo: Reese family.

"She told me she feels that it was a way for God to get a message out from her to other people; to touch other people that she is hoping she could do that," Levy said.

Rachel also sent Levy her favorite Bible verse after the fire: "The Lord gave and the Lord has taken away; may the name of the Lord be praised" from Job 1:21-1:22.

To Rachel, especially after the fire, this verse has meaning to her because "even though she lots material things and animals too, the Lord is still going to provide for them and that He is still there for it all," Levy said.

A post by Rachel as she remembers the dog that she lost in a fire on June 2, 2017 in Brunswick. Photo: Facebook.

Levy said the Reese family is shaken from the fire and isn't ready to talk. Even so, they remain positive thanks to the community's support.

"As Christians, we should help other people," Levy said. "There are so many negative things... It's nice to see people reaching out to help one another."

Rachel, her aunt and uncle are currently living at a friend's house. Levy set up a GoFundMe page where you can help reach their $4,000 goal by donating here.

The Brunswick Fire Department is still looking into what caused the fire, but the family believes it started from an electrical issue.

Rachel's aunt woke up to a loud noise and found a fire engulfing their porch backyard in Brunswick on June 2, 2017. The fire destroyed everything, Levy said. Photo: Reese family.