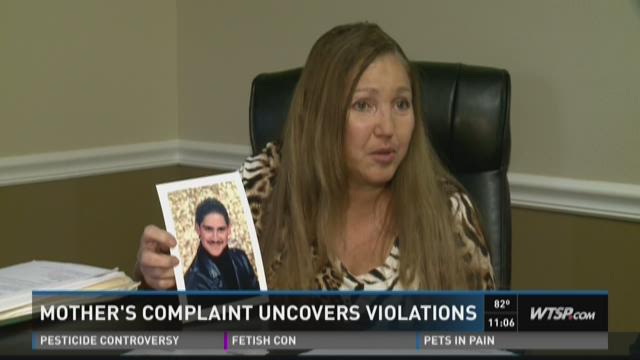 A local mother insists negligence at a Bay area hospital is to blame for her son's death. Her complaint to the state uncovers violations, but even with the new findings, the heartbroken mom still can't sue to get justice for her son because of a Florida law.

“I don't want a dime from anyone, because that's not going to solve bringing my son back, but I'm going to make sure one way or another this gets put to a stop,” says mother Jeanette Gonzalez.

Gonzalez says recent violations found at Florida Hospital North Pinellas give her some vindication for concerns surrounding her son's death.

“Everything that my gut feeling suspected, everything I felt was happening -- [it] was actually happening,” says Gonzalez.

Javier Roldan, 33, went into the hospital for a broken leg and six days later, he was dead. She insists that staff negligence is what killed her son.

“They just left him laying there suffering. I'm watching this young man moaning and groaning, and shaking his head, and having seizure, and not one person would believe me,” says Gonzalez.

10News told you in March, Jeanette couldn't sue the hospital because of the state's Wrongful Death Act.

Loved ones can't file a medical malpractice suit, if the patient who dies is single, 25 or older, and without dependents.

“Because of the way the law is written, there is nothing we can do,” says attorney Nicolette Nicoletti.

With help from Nicoletti, Jeanette did file a complaint with the state Agency for Health Care Administration.

AHCA did a surprise inspection at the hospital and found: nursing staff failed to follow doctors’ orders, give proper medications and IVs, didn't monitor a patient's heart as directed, and failed to supervise and evaluate patient care.

“It's heartbreaking to find these complaints come out that were similar to Miss Gonzalez's complaints, and to know these violations still occur even after the death of an innocent person,” says Nicoletti. “We want the hospital policies changed. We want them followed. And we want a law written that provides justice for all and does not discriminate against a class of people, which -- in my opinion -- this law does,” Nicoletti says.

“At Florida Hospital North Pinellas, our top priority is the safety and care of our patients. Due to HIPAA regulations, we cannot comment on any patient who we have provided care. What we can share, is back in May, AHCA found a few deficiencies during a site survey that we immediately corrected. AHCA accepted our plan for the deficiencies, all safety measures are now up to code.” Because of the corrective plan, the hospital says it doesn’t face any fines or discipline.

Jeanette says she won't stop until she gets justice for Javier and patients like him.

“I'm going to write to every legislator and pound on their door in Tallahassee, because this law is going to be changed. I don't care if this is going to take the rest of my life. I'm going to get it done,” says Gonzalez.

Nicoletti also filed a complaint with the Florida Department of Health. That investigation will look specifically at the doctors' actions leading up to Javier's death.

AHCA says, “The Agency takes very seriously our responsibility to ensure the health and safety of all patients and to hold those health care facilities who fail to do so accountable to the patients they serve.” To check out deficiencies at all Florida hospitals, CLICK HERE.

To file a complaint with the Florida Department of Health, CLICK HERE.