They say this should serve as a warning to other homeowners as we head into storm season. 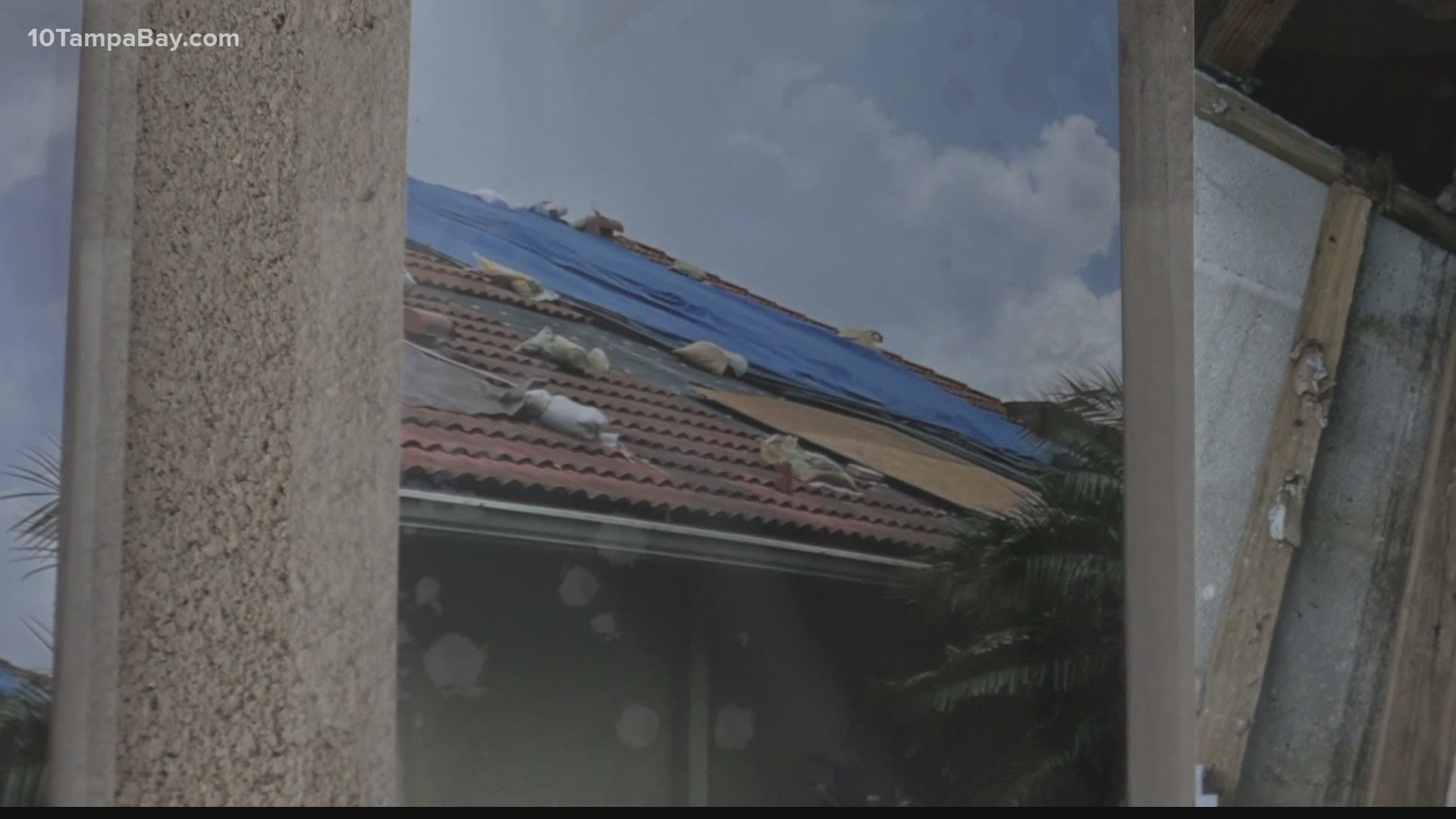 LUTZ, Fla. — When it rains, it quite literally pours inside Maureen Whitlock’s home of 20 years.

It's become a ritual to bail gallons of water falling through their living room ceiling. The hum of fans and dehumidifiers has become all too commonplace.

“When it rains, it’s very scary,” Whitlock said. “It’s not, ‘oh listen to that nice rainfall on the roof,’ it’s, ‘oh my God we’ve got to do something to prevent any more damage.’”

Whitlock and her husband say severe storms in 2018 left them with a leaking roof. Their insurance provider, USAA, came to their home, wrote an estimate, issued payment and hired a preferred contractor to fix the damage, according to documents the Whitlocks provided to 10 Tampa Bay.

But after demolition began, the contractor said the damage was more extensive than initially thought and the money paid out by their insurance provider would not be enough to cover the costs to repair.

Eventually, mediation between the Whitlocks and USAA was completed in 2019 where they say their insurance provider, again, agreed to fix the problem.

But, nearly three years later, the only change is the amount of tarping on the Whitlock’s roof and the size of the hole in their living room ceiling.

A spokesperson for USAA said the company is “well known for providing outstanding claims service to our members,” and said this case was a disagreement over the amount owed for covered versus non-covered damages.

Due to ongoing litigation, they did not comment further.

“We have a home that’s barely livable right now,” she said. “When I try to run this around in my head in terms of can they leave us like this, the only thing that gets me from one day to the next is that the right people don’t know.”

While the Whitlock’s particular problem may be unique and extreme, it’s a situation that’s likely to be common for homeowners in Tampa Bay as we head into storm season.

Whitlock says she hopes their ordeal serves as a warning for others.

“Look at what the insurance company is saying to you – they have their adjusters, their private adjusters that work for them. None of those people are working in your best interest,” she said.

They hired their own public adjuster, someone who represents insurance policyholders in a claim situation.

David Crosby, of Bay Area Public Adjuster, said another common mistake homeowners make is telling their insurance providers too much.

“They can use it against you,” he said, referencing a hypothetical example where a homeowner might mention a prior unrelated roof leak. “They’ll say that’s an ongoing leak then, that’s excluded from your policy and you’ve given them the ammunition … to deny or underpay your claim.”

While the Whitlocks are now suing their insurance provider, that could become more difficult for Florida homeowners moving forward.

Crosby says an insurance reform bill that arrived on Gov. DeSantis' desk Wednesday takes away even more of what little power homeowners have to fight back against your insurance company.

SB 76 aims to limit fees of attorneys who represent homeowners in lawsuits against insurers and reduces the time to file claims from three years to two years.