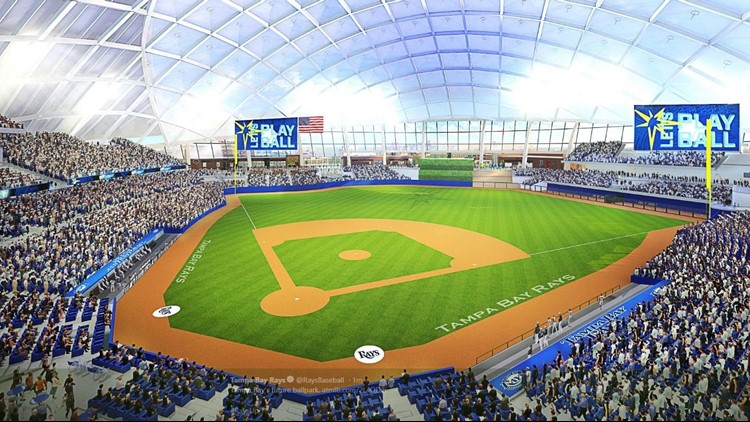 TAMPA, Fla. - With the Tampa Bay Rays at a crucial juncture for securing financing - presumably, much of it public - for a proposed new stadium in Ybor City, the most important decisions moving forward will likely come from Hillsborough county commissioners.

10News asked each candidate running for a commission seat this year about his or her opinions on a new stadium. Below is a summary of their answers.

Primary day is August 28 with general elections on November 6.

Ken Hagan (R) - Hillsborough's lead negotiator on the Rays stadium deal is running for a Northwest Hillsborough seat after reaching term limits on his countywide District 5 seat. He did not respond to 10News' questionnaire and has repeatedly ignored questions regarding his secret stadium negotiations. However, Hagan has indicated a number of public subsidies should be on the table in order to secure the team's future in Ybor City, from a bed tax increase to a new entertainment district tax to land and infrastructure expenditures. It is a departure from his stance back in 2010, when he said he opposed any public dollars going to a new Rays stadium. In 2014, he shifted to a no "new” tax dollars for a stadium stance. There are few leaders who have shown more public support for a Tampa stadium than Hagan.

Chris Paradies (R) - Lost primary - Paradies was critical of Hagan's handling of the Stadium Saga thus far and his level of transparency. "I am all for a privately-financed stadium and I believe that Hillsborough and Pinellas counties should work together to find a path to say yes to the owner of the Rays" but "secret deals never turn out good for taxpayers." He added an $892 million stadium doesn't advance any of the county's biggest needs and any deal with the Rays should be negotiated in public and approved by voters before moving forward.

Angela Birdsong (D) - Birdsong says she doesn't think Hillsborough taxpayers support "taking money from working people in this county and giving it to billionaire developers and sports team owners." And she won't support "divert(ing) a cent of taxpayer money to a fancy stadium while taking away" from other county priorities. However, she said she was open to other possible sources of funding that wouldn't directly "divert" tax dollars away from the county and were funded by users, such as bed taxes, CRA funding, or etc. "From the beginning, the assumption should have been that the Rays would pay for the Rays stadium and this should be made clear going forward," she said.

Andrew Davis (D) - Davis didn't respond to 10News' questionnaire, but his website says "I am opposed to any stadium for the Rays that includes public money. We currently have too many needs for this to be a high priority. I am happy to revisit this once our infrastructure is up-to-date with projected growth numbers and our school system is properly funded."

Stacy White* (R) - The incumbent commissioner didn't respond to 10News' questionnaire, but remains one of the county's most staunch opponents of public subsidies for pro stadiums. He has spoken out against the plan to use CRA/CDD/incremental property tax revenues to fund a new stadium and has lobbied for more transparency.

Mariella Smith (D) - Smith said general revenue funds should be off the table for new stadium discussions, but wanted to help keep the Rays in Tampa Bay and kept the door open to bed taxes or CRA property tax money. She said bed taxes "might be better spent on our transportation needs," although they generally are restricted from most transportation spending. And CRA funding is "up to the City of Tampa," although the county would also need to approve most CRA spending. Smith said more transparency is needed in the process at this point: "Before the County makes any offers of support, the public should be given much more information about the deal, and the public should be included in the process."

Victor Crist (R) - Crist, a termed-out incumbent, is leaving his District 2 seat for another term in District 5 . He didn't respond to 10News' questionnaire but has been a moderate voice on the stadium issue over the years. He has opposed most public spending so far on the stadium but has not closed the door on any ideas.

Angel Urbina Capo (R) - Lost primary - Capo says he doesn't support "any more taxes to accommodate any professional sports venue that will not have a return of investment in 5 years," including the proposed Rays stadium. But he "supports tax credits" for those that contribute to a new stadium so the county doesn't have to "borrow money or raise taxes for it." He also called for more transparency and a "review to determine if any wrongdoing was committed."

Joe Kotvas (NPA) - "I am opposed to adding any new type of tax on the people of Hillsborough County for the building of the Rays stadium," Kotvas said, adding that residents he has come across all question the benefit of spending public funds on a new stadium. He urged the county to move "very cautiously" and thinks "the owners of the Rays are setting the stage to blame Tampa and Hillsborough County for moving the team to another city."

Todd Marks (R) - Marks called for more transparency and "no taxpayer dollars" toward a ballpark. "We have too many unfunded projects that are needed to help improve transportation in Hillsborough County, among other pressing items, and we should not spend a dime on a ballpark subsidizing the Rays."

Aakash Patel (R) - Lost primary - Patel has shown support for keeping the Rays in Tampa Bay and is a member of the "Rays 100" group trying to build support for a new stadium. But Patel also said "No tax dollars should be used to build the stadium. Private funds should be used only." He suggested the county could have a role in encouraging business support. He also made a comment on a July 23 radio show that he would be open to increasing the bed tax to help fund the stadium if Hillsborough hotels supported it.

Ray Chiaramonte (D) - Lost primary - Chiaramonte said he thinks the county should consider targeting revenues that tourists help fund to pay for any public portion of a Rays stadium, including possibly the bed tax, a CDD/CRA district, entertainment taxes on food/and beverage near the park and/or a car rental tax. He said buying land for the stadium, general revenue money, or transportation money for infrastructure would not be his first choice. He emphasized return on investment and said the county should ensure any public expenditures should provide at least as much benefit as they do a cost.

Mark Nash (D) - Lost primary - "Depending on the details, direct investment in a stadium could make sense," Nash said, in addition to possible infrastructure contributions. But Nash said he had "concerns" with the proposed stadium plans, including a lack of transit options to support a new project of that size in Ybor City. He said he was also concerned about the lack of transparency thus far regarding the expected cost to the public. "As things stand right now, Hillsborough County doesn't have a billion dollars to spare for a new stadium."

Kimberly Overman (D) - Overman did not respond to 10News' questionnaire. In a Facebook post, she said the stadium issue was not a "core issue" in her campaign, but has been a longtime supporter of improved transit in Tampa and posted in April about how transit could benefit the Rays too.

Sky White (D) - Lost primary - Pointing to the area around Tropicana Field in St. Petersburg, White says stadiums don't "increase revenue for the surrounding areas" and "I do not agree with any form of public funds being used to build the new Tampa Bay Rays stadium." She says the county should discourage the team from moving forward in Ybor City and "instead invest into the success of the Ybor City residents by building more affordable housing."

Kim "KLARC" O'Connor (GREEN) - A season ticket holder for Yankees' Spring Training and Ybor City resident, O'Connor says she is a huge proponent for the proposed new stadium. She says she would support an increase in the bed tax as long as "as equal funds are raised for the homeless and affordable housing such as the H.O.P.E. project." However, bed tax revenues generally cannot be used for expenses that don't drive tourism. She said any new stadium should be surrounded by an entertainment district, but the conversations need to be transparent and include more public input. She also said there needs to be "compensation" for minorities that may be displaced by a new stadium.