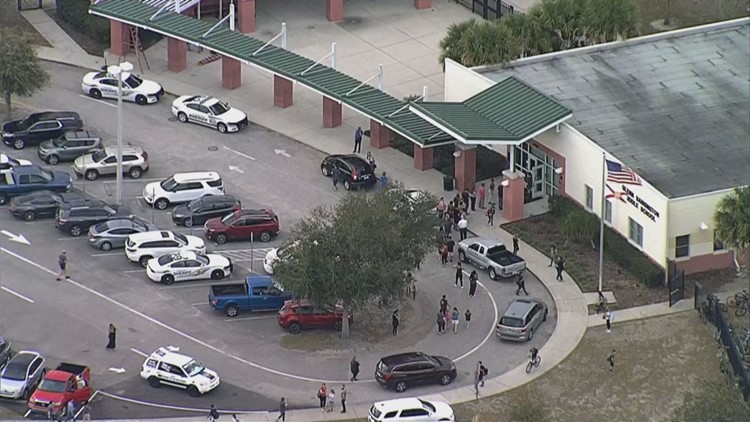 Photo by: Sky10
An aerial view of Barrington Middle School in Lithia, Florida.

LITHIA, Fla. — A 15-year-old student is accused of calling in a fake claim about a gun on campus Wednesday at Barrington Middle School.

The Hillsborough County Sheriff’s Office said the student called 911 to say his friend had a gun at the school. The caller then hung up when the 911 dispatcher started asking him more questions, according to investigators.

The campus went into lockdown immediately, along with Stowers Elementary, which is connected to the middle school. Kids 'R' Kids Learning Academy, which is across the street from Barrington Middle, also went on lockdown.

Patrol deputies got to the school in four minutes, according to law enforcement. The sheriff’s office aviation and K-9 units were also dispatched to the schools as a precaution.

Deputies searched and cleared each building. No students were hurt and no gun was found on either campus, according to investigators.

Investigators said the student took another student's cell phone into a school bathroom and called 911. Then the student accused of making the call got rid of the phone in a toilet, deputies said.

“Causing fear and panic is not funny, and as this student will, unfortunately, learn the hard way, making such a serious false claim comes with severe consequences,” said Sheriff Chad Chronister. “I hope that the quick actions of our deputies in responding to the potential threat and detectives who worked diligently to locate the perpetrator can provide some level of comfort to the families of Barrington Middle and Stowers Elementary Schools.”

The student is facing multiple charges, including tampering with physical evidence and misuse of the 911 system.

RELATED: Deputies searching for 911 caller who triggered panic at 3 schools