Law enforcement, including the FBI and ATF, now are of the mindset the recent ATM explosion in Valrico is connected to two others, including unsuccessful attempts. 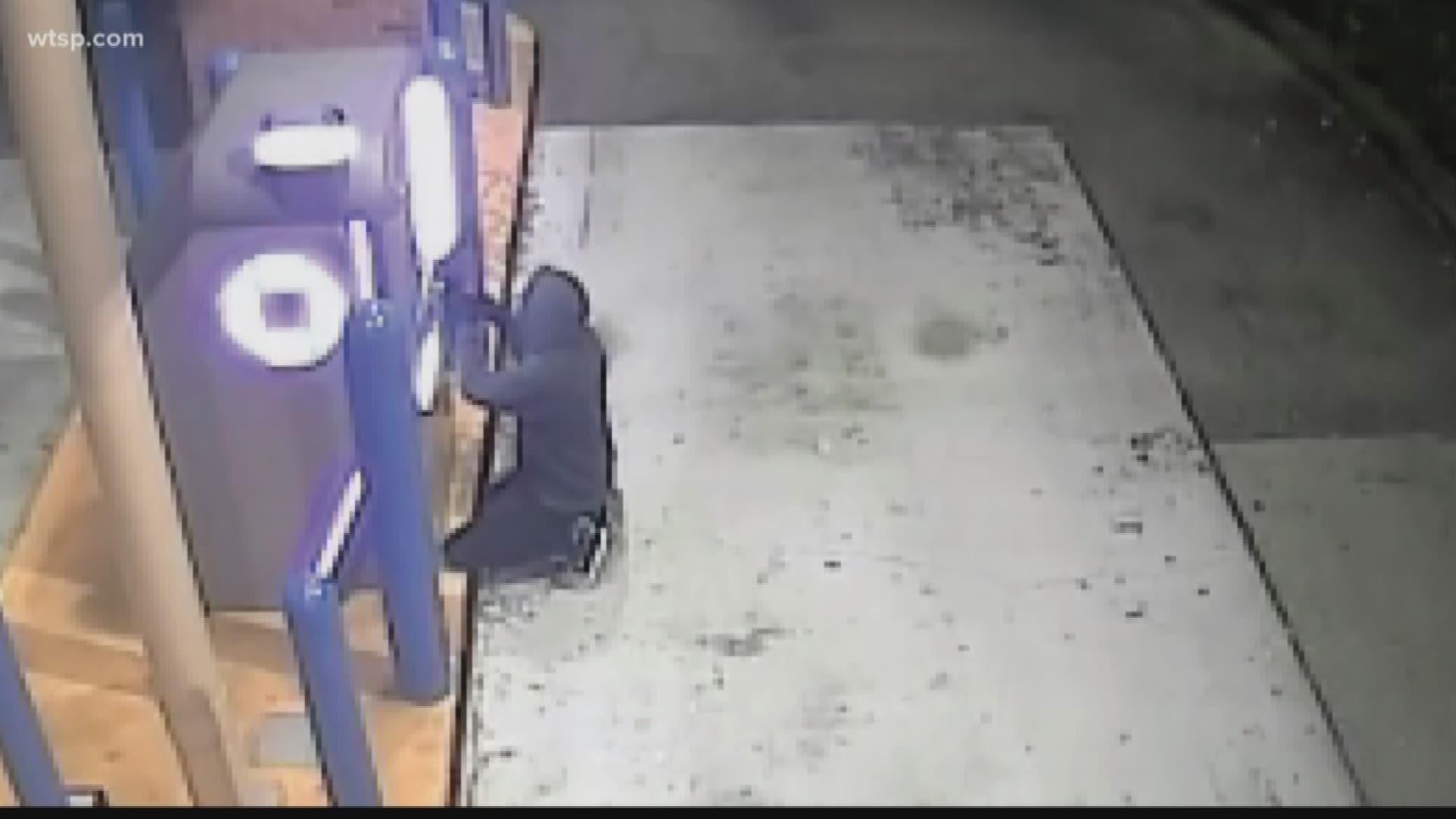 VALRICO, Fla. — Investigators say they’re now operating under the assumption that the same person is responsible for three ATM explosions during the past three months across Tampa Bay.

In the latest blast over the weekend, the thief got away with money from a bank ATM in Valrico. A person seen in security camera images is believed to be responsible, but so far, those pictures are grainy.

Detectives are working to sharpen the images and hope to distribute them to the public soon.

Hillsborough County Sheriff Chad Chronister says he is concerned if the suspect is not captured soon, it’s only a matter of time before someone gets hurt or killed.

The FBI and ATF are assisting in the investigation.

“This individual is becoming extremely brazen in the way he’s detonating these devices,” Chronister said.

Early Sunday morning, investigators say at Valrico Regions Bank ATM on Bell Shoals Road became the third cash machine blown-up in the past three months. There were two other explosions: an ATM at a Pilot Bank in Westchase back in December and an Oldsmar BB&T ATM in November.

At another bank, the J.P. Morgan Chase on Countryway Boulevard in Westchase, they think the same person spray-painted over a security camera but never detonated a device. That incident happened Dec. 8, the sheriff's office said.

The Regions Bank on Bell Shoals Road had been hit several times unsuccessfully -- July 7, Sept. 5 and Jan. 12 -- by at least one culprit who spray-painted the camera lens until the explosion this past weekend.

All of the events have taken place around 3-4 a.m., and in each case, they determined the suspect is using similar explosives.

Chronister says in at least two of the cases, people working nearby actually heard a loud boom but didn’t report it at the time because they assumed it was a transformer blowing or some other issue.

The sheriff is asking anyone who hears anything unusual to give them a call right away to give them more time to close-in on whoever is bombing these ATMs.

Investigators say the first few attempts to get cash out of the damaged ATMs were unsuccessful. This latest time, the bomber was able to make away with some cash, Chronister said.

Unfortunately, the sheriff says, that could encourage the suspect to keep going.

“Like, especially at night,” said customer Maria Alaynick. “If people come here in the night to get something from the ATM.”

Chronister didn’t want to disclose too much information but said the ATF had already discovered important information regarding the type of explosives and bomb-making materials being used.

What’s important, said the sheriff, is there doesn’t appear to be any sort of a timing device or remote trigger detonating the bombs.

That reduces but does not eliminate the risk.

Chronister says the cash inside the machines is FDIC insured, no different than the money in any other bank robbery. That means people’s deposits are safe.

But the machines are expensive, said the sheriff, and the costs associated with these brazen bombings are something all of us are likely to pay for.

“Yeah, they got a pay to fix it. Which cost everybody down the road. It’s not free. They’ve got insurance. It all snowballs,” Tate said. “That’s why we all work so much to try to survive.”

But there potentially could be a greater cost to pay.

“You always have to wonder about not just the damage or the financial loss,” Chronister said. “But the harm to another individual. That’s what I’m most concerned with.”