Thousands of honey bees get away, sting people in a Tampa neighborhood

A couple who came by to remove the bees had to come back the next day, and their efforts are disappointing to the Tampa Bay Beekeepers Association. 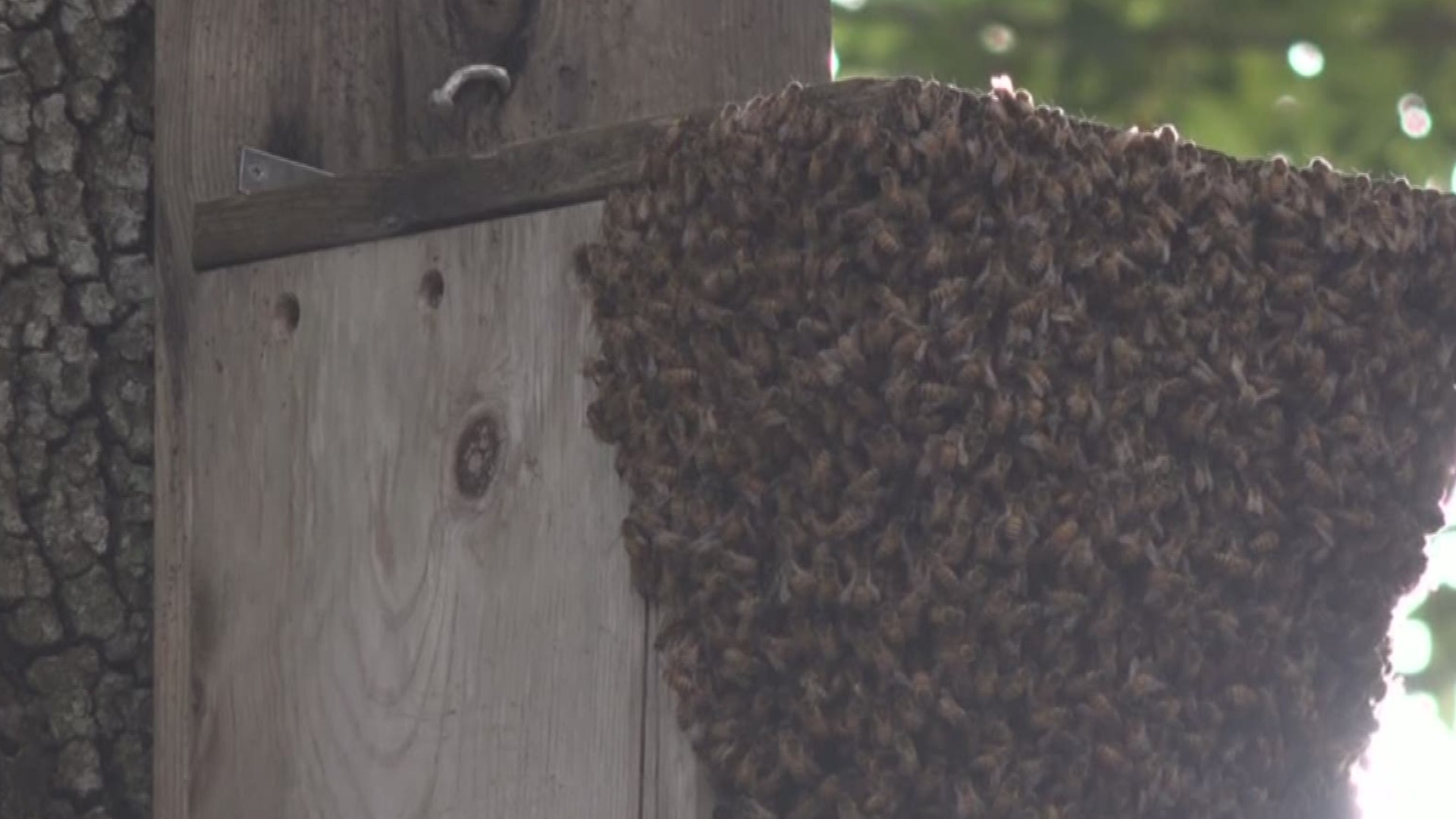 TAMPA, Fla. — When a hive of honey bees showed up in an owl house high above Monica O’Flanagan’s front yard, the South Tampa mom wanted the bees gone but not killed.

“We wanted to do the right thing,” O’Flanagan said. “We needed them to go because we have a lot of kids in the neighborhood. We know bees are endangered and struggling right now.”

She saw an ad from an area bee rescue service and hired Christian and Stephanie Ramthun to have the bees relocated to a farm in Odessa. The couple spent nearly an hour removing the owl house while using duct tape to try to keep as many bees as they could inside.

But it wasn’t easy.

“The problem right now is they’re starting to climb up the tree itself, which is not what we want, so I’ve got to be quicker,” said Christian Ramthun as he was working to remove the hive.

But afterward, the Ramthuns seemed satisfied with the end result.

“It was smooth,” said Christian of the removal. “Preparation paid off.”

His wife Stephanie, agreed. “There are still several bees lose but that’s just the name of the game,” she said. “You can’t get 100 percent of the bees.”

RELATED: Veterans with PTSD, anxiety turn to beekeeping for relief

RELATED: Florida beekeeper says someone is poisoning his bees

The O’Flanagans watched from inside their home but almost immediately had questions before going to bed Monday night.

“I was a little concerned because I saw a lot of bees flying around the street lights. And when I say a lot, I mean thousands,” O’Flanagan said.

Tuesday morning, things were even worse.

“I heard from a lot of neighbors there were some very angry bees out here -- a lot,” O’Flanagan said.

Agitated over the loss of their home, the bees started attacking anyone who got close -- including a young girl walking her dog, a crew working on gas lines and even O’Flanagan's own daughter on her way out the door to school.

“She got them in her hair, then got in the car, so they were freaking out about the bees her hair in the car,” she said.

10News showed our video to the Tampa Bay Beekeepers Association.

“This isn’t the way it should have been. This isn’t the norm,” said Jan Allen, who is on the group’s board and actively works to promote bee reservation.

Allen says she’s surprised the beekeepers involved in Monday night’s relocation didn’t use a bee vac and other standard practices to safely suck up the bees for relocation.

In fact, things got so bad the Ramthuns say they had to return Tuesday and admitted to using an insecticide to kill the remaining bees. The Ramthuns say the bees would have died soon anyway and it was necessary because a family member of the O’Flanagans was scheduled to arrive Tuesday night who is severely allergic to bees.

But Allen says there were other options.

“It’s so important to save them… It hurts bad,” Allen said.

Reached by telephone, the Ramthuns admit they were unprepared for the hive’s size that had grown considerably since they first accepted the job.

The Tampa Bay Beekeepers Association says to contact them before you hire anyone to move bees on your property. They have a long list of qualified people who have years of experience handling bees.