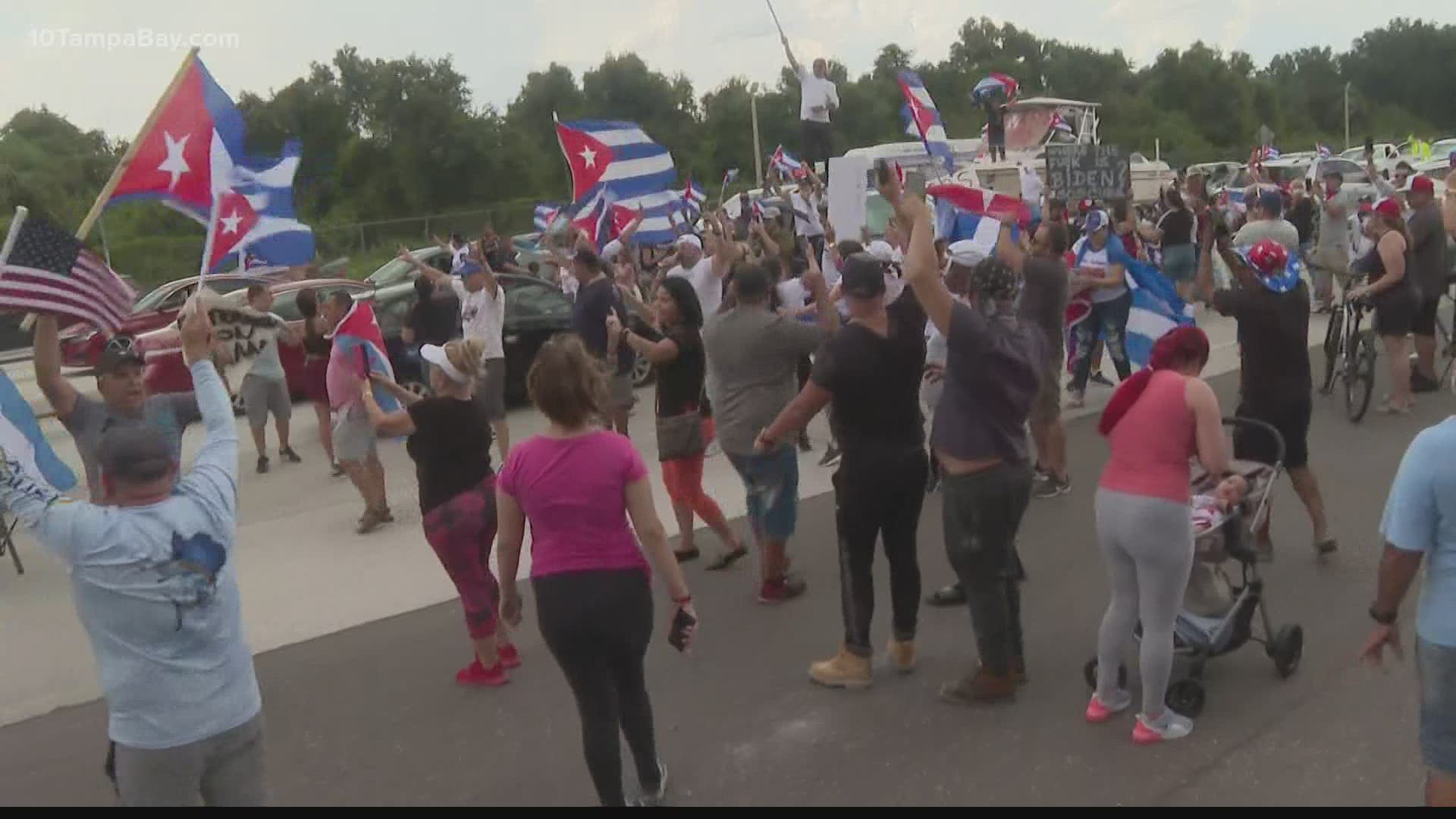 TAMPA, Fla. — Demonstrators in support of the Cuban people marched along major roadways in Tampa and, at one point, attempted to get onto Interstate 275.

A Florida Highway Patrol trooper was injured while interacting with the crowd, according to the Tampa Police Department. FHP says the trooper had cuts on his arms and face as well as a broken ankle. The trooper was taken to the hospital to be treated, according to FHP.

Three people were arrested, with two charged with battery on a law enforcement officer.

The crowd of people want others to recognize the situation on the island nation, where citizens have been protesting against the government amid the coronavirus pandemic on top of a worsening economic crisis, 10 Tampa Bay's Angelina Salcedo reports.

The crowd blocked traffic for a time Tuesday afternoon at N. Dale Mabry Highway and W. Columbus Drive before moving to the interstate, forcing roadway closures in the area. The crowd chanted at times, "Si Cuba está en la calle, Tampa también,” which means if Cuba is in the streets, Tampa is too, Salcedo reported.

The protests in Tampa Bay join those in Orlando, Miami and elsewhere since the weekend. According to The Associated Press, many people took to the streets in Cuba to protest food shortages, high prices and substandard health conditions.

Scroll below to see how the events played out Tuesday afternoon and evening in Tampa.

Three people were arrested as police officers and Florida Highway Patrol troopers tried to move the crowd of Cuba demonstrators away from Interstate 275, the Tampa Police Department said in a news release.

One trooper was hurt, police said.

Police said the crowd of people tried to take over the exit ramp at northbound I-275 just before 7 p.m. About a half-hour later, part of the group began moving back to Al Lopez Park while others moved along Dale Mabry Highway.

The crowd at the park dispersed after 9:30 p.m.

"The Tampa Police Department continues to support everyone's 1st Amendment right for free speech. We will continue to work with groups who want to have their voices heard in a safe and secure manner," Tampa police said in a statement.

“LIBERTAD” 🇨🇺 This is the corner of Dale Mabry and Columbus in #Tampa right now. Gridlock. #SOSCubaLibre @10TampaBay pic.twitter.com/ZvWYPqHiyx

OUT OF THE STREET: @TampaPD asking #SOSCubaLibre demonstrators to make their way back to Al Lopez Park w/ a loud speaker. Important here: the officer says “estamos de acuerdo con ustedes, por favor regresen al parque” (We agree with you, please go back the he park) @10TampaBay pic.twitter.com/y9YNuaPfs2

Tampa police are asking the crowd to disperse from the area after they began blocking an off-ramp to Interstate 275.

THE SCENE: Cuban demonstrators are blocking the off ramp to I-275 S and are on both sides of N Dale Mabry. They continue chanting “Si Cuba está en la Calle, Tampa también” (If Cuba is in the streets, Tampa is too) #SOSCuba #SOSCubaLibre @10TampaBay pic.twitter.com/pO6pt8fzUZ

Here’s a look at what we’re seeing down N Dale Mabry where the demonstrators have walked down to I-275. I was told they were doing to try and get in the HWY. @TampaPD blocking the ramps right now. The demonstration has stayed peaceful thus far #SOSCuba #SOSCubaLibre @10TampaBay pic.twitter.com/25EhNqNhnL

VIEW FROM ABOVE 🇨🇺: Cuban demonstrators in #Tampa demand freedom/ask for an intervention from the U.S. Government. I’m told by several people here - the people of Cuba view the U.S. as an oasis of freedom. That’s why they say they’re asking @POTUS for help #SOSCuba @10TampaBay pic.twitter.com/ixUnMCNx9D

Another group of demonstrators for #SOSCuba headed to this intersection from Al Lopez Park. They have W Columbus fully blocked #SOSCubaLibre @10TampaBay pic.twitter.com/yQTWAcM6i8

The crowd thanks @TampaPD for protecting them and making sure everyone is safe. For them this is a stark contrast to what’s happening in #Cuba with the militia #SOSCuba #SOSCubaLibre @10TampaBay pic.twitter.com/rdBKxPJj0M

The crowd now chants “Si #Cuba está en la calle, Tampa también” which means if Cuba is in the streets, Tampa is too. They’re standing in solidarity with their country demanding freedom #SOSCubaLibre #SOSCuba @10TampaBay pic.twitter.com/DoDhkIhAFQ