Home batteries kept a Sarasota house powered up during Irma 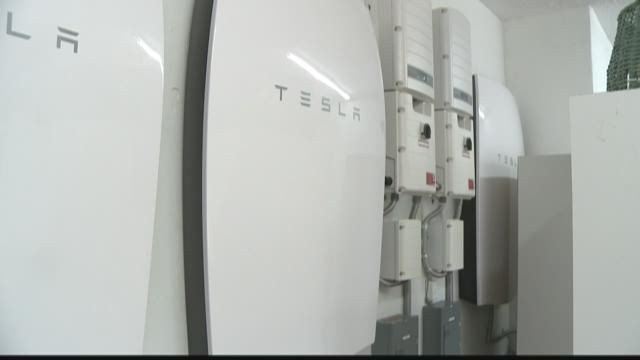 SARASOTA, Fla. -- One of the biggest challenges from Hurricane Irma were the power outages that lasted days even longer.

Keeping the power on was easy for some thanks to new technology using the sun. When 60 percent of Sarasota County lost power including George Colliard’s neighbors, “We didn’t realize there was an outage the power never went out here things automatically switched,” he said.

It's thanks to the same Tesla battery technology that powers the company’s vehicles.

“These are the Tesla battery backups all power from solar system panels on the roof … they’re running the house,” says Colliard as he points to the slick and slim batteries mounted on the way. "We’re on solar 24 hours a day, we’re always on solar batteries here.”

We caught up with the Colliards in March after they had certified technicians from Brilliant Harvest install not one but 4 Tesla batteries in the garage … to see how they worked out.

And great savings, too. With help from 63 solar panels, the sun produces more power than needed. The extra is sold back to the power company.

A generator serves as a backup system. he says,

"Yes, we run whole house or just the heavy load we saw the switch system I can make the choice what I want to run. This is a 30 kilowatt generator with a 1 thousand gallon propane tank buried under ground.”

This power backup system including the Tesla batteries, the propane tank and generator, the solar panels doesn’t come cheap. The Colliards spent $120,000, but they got a 30 percent tax credit.

If that price is too steep for you, we found other companies that make home batteries that cost several thousand dollars less to nearly double the Tesla price.

Click here for more information on these brands: http://www.businessinsider.com/best-at-home-battery-options-2016-9/#

The Colliards say the system needs some tweaking. The communications panel with the central office didn't work as well and they are adding more circuits to expand service. Each Tesla home battery installed cost about $12,500.

But, “It’s a great peace of mind," Colliard says, and that’s priceless.