I-75, Fowler Avenue in Tampa reopen after deadly semi-truck crash

The driver of a vehicle was killed when the semi fell on him. 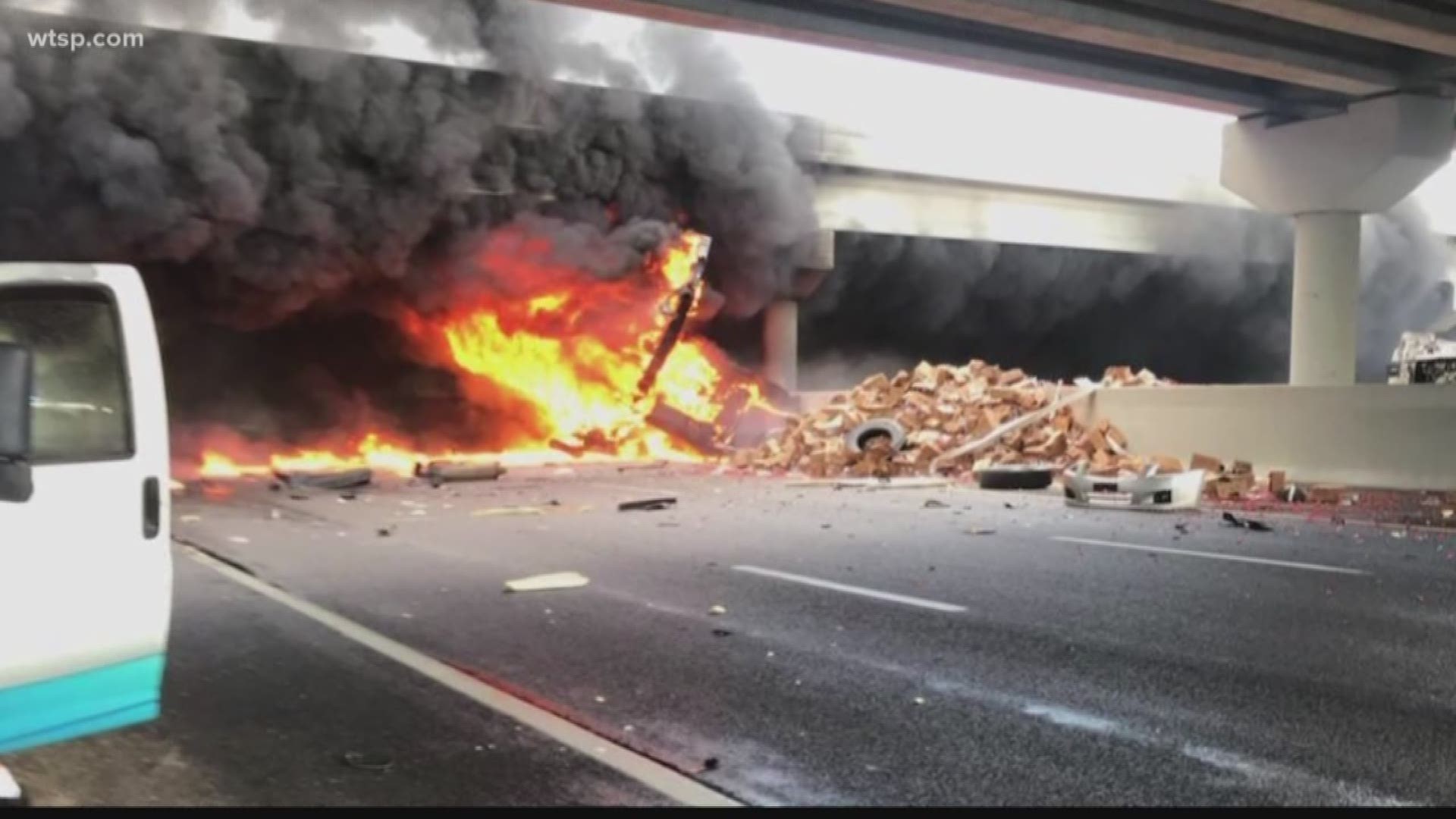 TAMPA, Fla. -- A tractor-trailer lost control and fell off an Interstate 75 overpass onto another vehicle on Fowler Avenue, killing one person in the other vehicle.

The Florida Highway Patrol on Tuesday said a vehicle entered the ramp onto northbound I-75, then lost control and spun across the interstate. It entered the path of the semi, and the two vehicles collided.

One of the semi's axles separated and entered the southbound lanes of I-75, where it struck a southbound vehicle.

The semi-truck burst into flames.

The driver who was killed was an adult male, FHP said. His name is being withheld pending notification of next of kin.

Hillsborough Fire Rescue said five patients have been treated and transported, including the driver of the tractor-trailer who suffered minor injuries. None of their injuries were considered life-threatening

An Aero Med helicopter airlifted one person to the hospital. 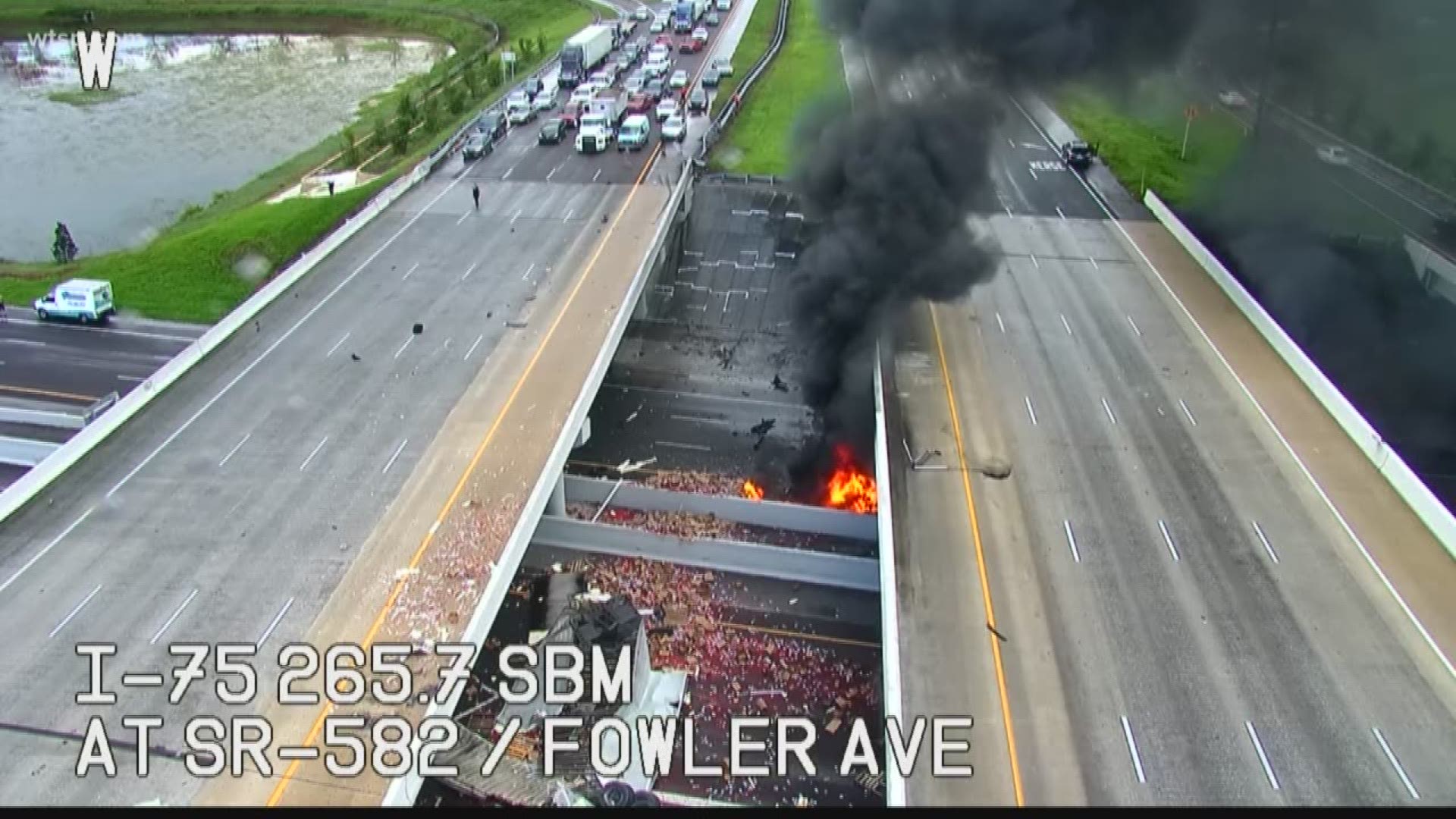 FHP will handle the crash investigation.

We asked Florida Department of Transportation’s District Structures Maintenance Engineer James Jacobson what experts to do ensure the bridge is safe enough for drivers to use.

“We do an overview of the bridge and look at the alignment to check for any shifting or sagging. Once we see it’s structurally ok, we get hands on and knock on beams to test for loss of strength. After closely inspecting the bridge and not noticing any dangerous signs, we try to get a few lanes open to get drivers moving. Yesterday, everything was shut down at first but after inspecting the bridge we were able to open two lanes that we knew were not damaged and far away from the fire,” Jacobson said.

Bridge engineers from the Department of Transportation are working to determine if the damage the bridge sustained is bad enough to keep it closed. As of the most recent update, the eastbound lanes and westbound lanes of Fowler Avenue have reopened, according to FHP.

Jacobson says fire and the heat it creates is always a big concern because while concrete is heat resistant, every material has its limits.

“The fire damaged three of the inside beams of the southbound overpass. Fortunately, it was not hot enough that it damaged the beams internally that they would have to be fully replaced. But, we will have to do some overnight repairs and patching to re-enforce the beams,” Jacobson said.

Jacobson says crews are already starting to fix the guardrails on Wednesday and that they will wait until overnight to do other repairs. Overall, he says it should take at least one week to get the roads and bridge fully restored

I-75 reopened Wednesday morning after the crash closed the interstate for several hours.

The truck was hauling tomatoes, which were left scattered all over the roadway.

Semi crashes from I-75 onto Fowler Ave.

DETOURS FOR I-75 in #Tampa: Anyone coming from north of the Apex will want to use I-275 to head south. Other options if you're coming from elsewhere are Bruce B Downs Blvd, 56th St, Nebraska Ave, Florida Ave, and US-301.