A Bay area police department is fed up saying the record number of pedestrian deaths doesn’t have to be so high if people would just follow the rules. 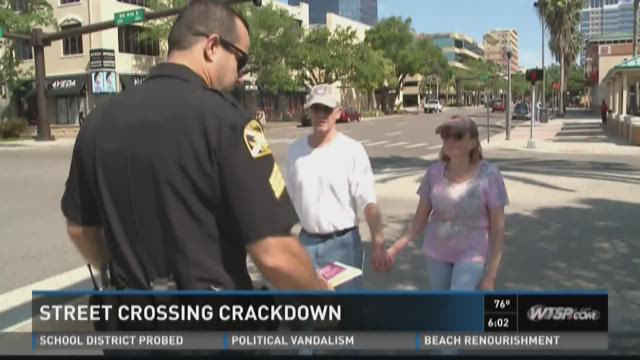 Year after year, there is a disturbing trend for the state of Florida when it comes to pedestrian deaths. We rank No. 1 in the nation. Now, a Bay area police department is fed up saying that number doesn’t have to be so high if people would just follow the rules.

For the past three months, St. Petersburg Police officers have been cracking down on jaywalkers, educating them about how dangerous it is not to use a crosswalk.

It was all part of a $74,000 grant from the Florida Department of Transportation to help bring awareness to this growing problem.

“We have 10-12 pedestrians average a year killed crossing the street,” says Fernandez.

So far this year, four pedestrians have lost their lives.

“I knew I was supposed to cross in a crosswalk,” says Jaclyn Gay, who lives in St. Pete.

That’s why now instead of educating — part two of the grant — has police enforcing the law. Not walking in a crosswalk will cost you a $62.50 ticket.

“I wasn’t expecting them to write me a ticket,” says Gay.

Some people may question why police are focusing on jaywalking when they could be watching bigger issues,

“This money is for the grant, just for this. Just to improve awareness and the main goal is not to give fines, it’s to improve safety and save people’s lives,” says Fernandez.

Police say they are hoping a $62 ticket will have people taking the extra step -- to possibly save their life.