JSO K-9 Fang was shot and killed in the line of duty early Sunday morning while chasing a carjacking suspect. 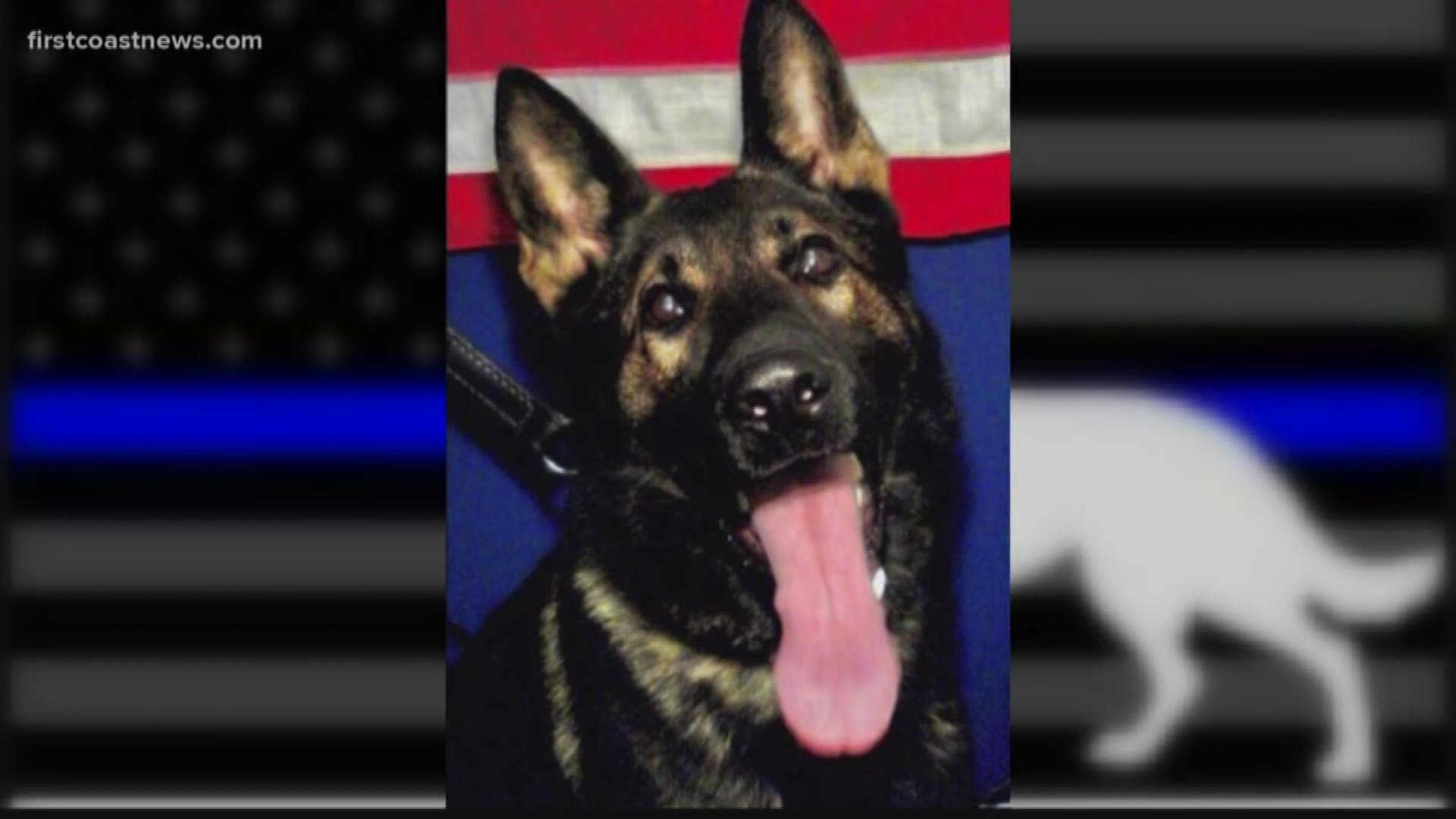 The Jacksonville Sheriff's Office is investigating both an armed carjacking and a homicide after they say a suspected carjacker shot and killed a JSO K-9.

JSO was called to the scene of an armed carjacking at a 7Eleven in the 11900 block of Lem Turner Road early Sunday morning.

The victim's vehicle was soon located and disabled via On-Star at westbound I-10 and Commerce Center Drive and the suspect, described as an adult male, fled the scene on foot. A JSO K-9 was sent to capture the suspect but was shot and killed during the pursuit, according to JSO.

Via Twitter, JSO expressed their sadness at the loss of the K-9 and confirmed the dog's name was Fang. Fang played a vital role in keeping people safe at special events and football games, says JSO. He was a 3-year-old German Shephard, dual-purpose bomb detector and patrol dog, according to the Jacksonville Sheriff's Office.

"He has captured some of the most dangerous criminals in Jax," JSO said via Twitter. "We will miss you, Fang. You are gone but will not be forgotten."

K-9 FANG played a vital roll keeping everyone safe at special events and football games. He has captured some of the most dangerous criminals in #JAX. We will miss you, FANG. You are gone but will not be forgotten.

Our hearts are breaking at #JSO, one of our police K-9's has been shot and killed while chasing an armed carjacking suspect in the area of I-10 and Cecil Commerce. The suspect has been apprehended by another #JSO K-9 that responded. More information forthcoming later today.

The suspect was later captured in the woods by another K-9 on Beaver Street.

Florida Highway Patrol tweeted their condolences to JSO and the K-9's partner.

This morning, We mourn the loss of our K9 brother from @JSOPIO. We pray for his partner and JSO family. He was shot and killed during a pursuit of an armed carjacker. The suspect was caught, but at a very heavy price. Thank you for your service, our four-legged hero. pic.twitter.com/dStVUIF8Kr

No injuries to the carjacking victim have been reported.

According to the Officer Down Memorial Facebook Page 19 K-9 officers have been killed in the line of duty in 2018, three of them were killed by gunfire.

JSO says they are now conducting two investigations - an armed carjacking and a homicide due to the deceased K-9.