Every day someone walks out of prison and into a new world. They're given an opportunity to start a new life, but that isn't always easy. A local non-profit is helping them make the transition. 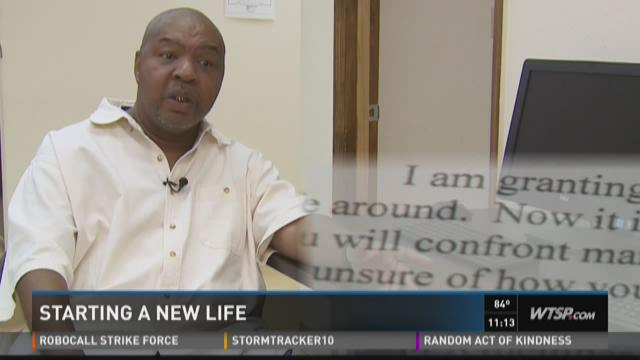 It's an entirely new world for Herbert Christopher.

“Getting out now, everything has done changed, you know? 1990 to now? It's like, I'm way behind times. Matter of fact, when someone gave me a phone, I didn't even know how to call out on the phone.”

Christopher was sentenced to life in prison for a drug charge when he was 24 years old. This executive clemency letter from President Obama changed everything.

On April 15 of this year, he walked out of prison a free man after 25 years. But taking that second chance was a difficult first step.

He's starting that journey at XO Factor, a non-profit started by Bethany McNeil in 2006 because there was a need for re-entry services.

“We work with them and find out maybe what your career used to be, is it feasible to think you can go back to the same thing. If not, how can we take those different skills and abilities you have and put them somewhere else where you can become productive and work,” says McNeil.

They walk someone through how to write a cover letter, teach them computer skills and the basics of how to act during an interview. XO Factor stays with them up until 90 days after they land a job.

“You committed a crime. You served your time and you should be able to grow past that. Use it as a place of reference, not residence,” says McNeil.

She’s worked with more than 600 people over the last four years. She says she has an 86% success rate.

“A lot of times I hear, 'why would I hire somebody who has a background?' And I say, 'several reasons: because number 1, they're more willing. They've went through an employment skills class, you get a tax credit for hiring someone with a background challenge.'”

The non-profit is run on donations and grants. For one person a year, $2,000 covers their clothing for interviews, their portfolio and transportation.

It helped Christopher land a job.

“I never had a job. Never in my life. But now, it's a new opportunity and I enjoy it. Knowing that this is who I am now. I can do this here.”

But he's not stopping there. While in prison, Christopher got his doctorate in Christian Theology. He hopes to work with kids in the same situation he was in 25 years ago.

“I want to work with the teens. I have a passion for that. I would like to work with troubled teens, especially because I come from that same lifestyle with them that I can help them and assist them and say, 'listen don't wait son, don't wait 'til you get 50 years old to learn a lesson.'”

Because the program keeps people from re-offending, it doesn't just help the people coming out of prison, it helps the community as well.