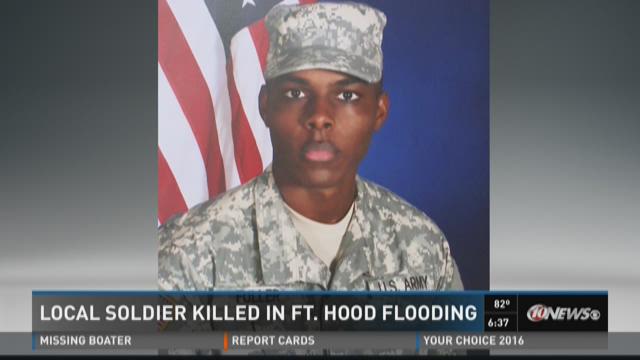 PALMETTO, Fla. - Two of the nine Ft. Hood, Texas soldiers that were killed during a tragic training accident this week are from Florida. One of them is from the Bay area.

Zachery Fuller is from Palmetto. The 23-year-old enlisted in November and had only been stationed at Fort Hood since April.

"Zach" as his family calls him was one of 9 soldiers who died on base when their 2.5 ton vehicle was overcome by flash flooding in about 8 feet of water on Thursday. About a dozen soldiers were learning how to operate what's called a Light Medium Tactical Truck. The soldiers were split between 2 vehicles and they managed to rescue 3 soldiers after it happened.

Zach's parents told 10News WTSP that they have happy memories of him. His mother Teri Coleman says,"Anybody who knows him knows what a wonderful person he was." Teri says her son was wise beyond his years, was very mature and responsible. She says last year he felt it was time for him to move out of the family's home to pursue a career in the military even though he'd recently completed his Associate's degree and could have continued his college studies.

Teri and his stepfather, Troy, says Zach was constantly trying to make plans for his future.

Teri says, "He is just a wonderful son and like I say, even as a kid his mind was always older than his age. He's been so very responsible for so long. He felt like at his age, it was time for him to be a man and move out of the house and take on his own responsibilities."

Zach's mother and grandmother were worried about Zach's safety when he enlisted. They knew about the dangers in places like Afghanistan and Iraq but never dreamed he'd lose his life while training in the United States. Troy says he was in the military and thought it was a good idea. "His grandmother and his mom were like 'I don't know', but they still supported him and I just thought he would do well and he did."

Teri adds, "He had a curiosity about how the military was and he loved it for the short period he was in there."

His parents shared some laughs despite the heartbreaking loss saying Zach loved to work out. Teri says, "His passion was track back in high school. He loved to run. He ran every day. He ate healthy while we were all eating cheeseburgers."

Teri says, "He was a very good kid, very respectful, never got into trouble, didn't smoke, didn't drink he was just an all-around good person."

He leaves behind a younger sister and a brother who is also in the military as well as two step siblings.

The other Florida soldier killed during the training missing was 22-year-old Brandon Banner of Milton which is in the Panhandle. He entered active-duty military service in March 2014 as a motor transport operator and was assigned to 3rd Battalion, 16th Field Artillery Regiment, 2nd Armored Brigade Combat Team, 1st Cavalry Division, Fort Hood, since July 2014.

His mother told CBS News that the military owes her an explanation about why the accident happened.