The Manatee School District reports a total of 63 students and employees who have tested positive for COVID-19. 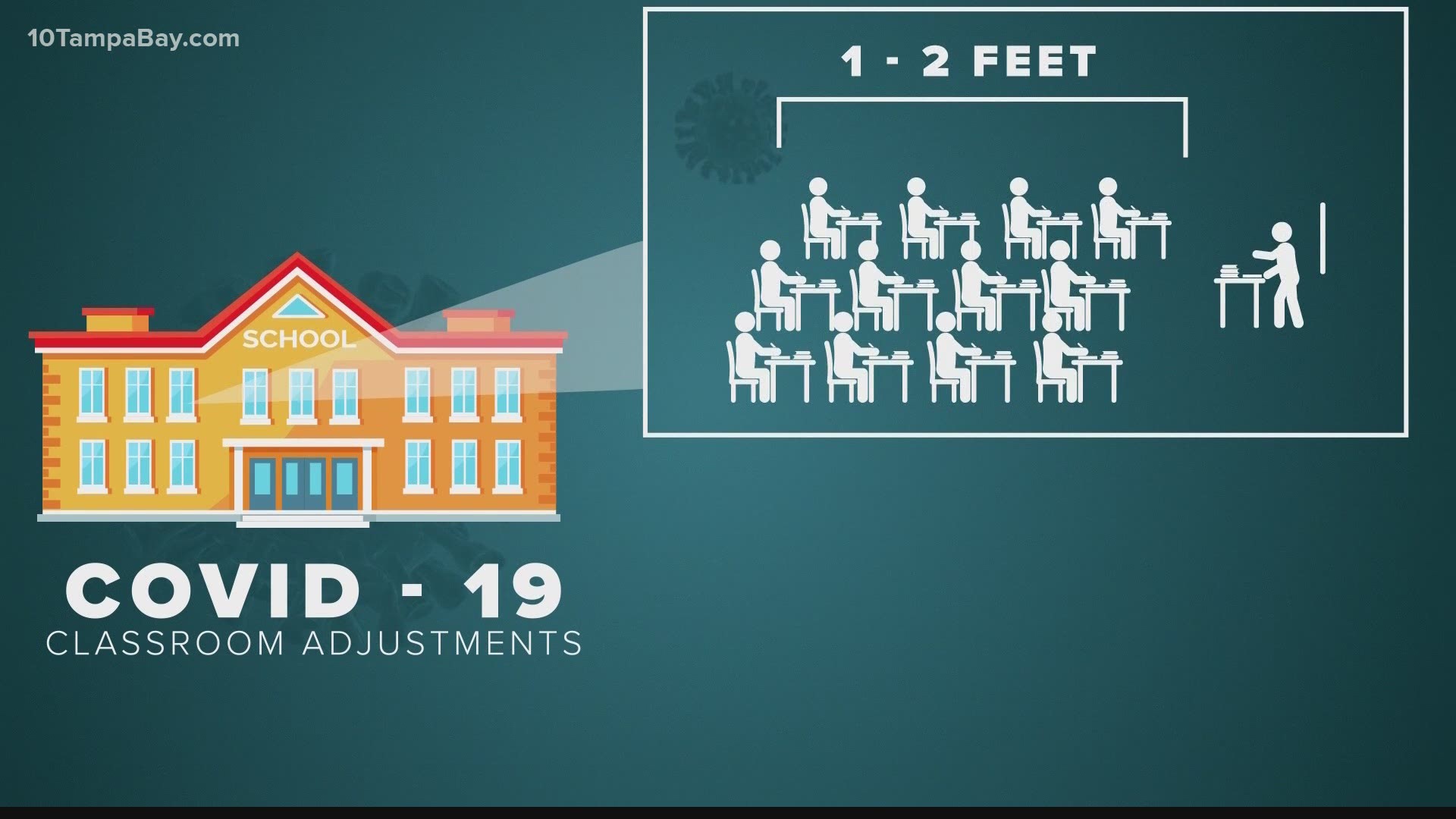 MANATEE COUNTY, Fla. — The school district of Manatee County recently started to report COVID-19 cases, exposures and the affected schools on its website.

More than 800 students and staff in the district have been sent home to quarantine after being exposed to COVID-19 at school since classrooms reopened August 17.

Someone is sent home to quarantine when they’ve stayed within 6 feet of a positive case for at least 15 minutes. The exposed people are forced to isolate for 14 days and monitor their symptoms.

“In every case that we’ve had in our schools up to now, anybody who has had direct exposure has been contacted through the school,” Mike Barber, a spokesman for the district said.

On the district’s COVID-19 Dashboard, 24 employees and 38 students have been documented as testing positive for the virus since schools began in-person instruction.

These positive cases resulted in 860 exposures, according to data released by the school district this week.

As the district nears the end of their fifth week back to the classroom, they seem to be getting a better handle on their cases and quarantines.

Here’s a breakdown of Manatee County Schools positive cases and quarantines by week:

It was during week three when a lack of social distancing and seating charts sent 112 students and staff home to quarantine from Palmetto High School.

“Look, these things happen, but this was avoidable,” said Manatee School Board Member Scott Hopes. “It’s a teaching moment. We’ve learned from it, and I’m confident that it will not reoccur, especially at this magnitude.”

And since then it hasn’t. Although a high volume of individuals are still being quarantined when a student or employee tests positive, it’s not at the extreme we saw at Palmetto High.

“Because our protocols are working,” Hopes said. “In other schools we have known cases on campus and there have been no contact because social distancing is practiced.”

Hopes says even in those rare cases where there may have been inconsequential contact, it’s one or two people, not hundreds.

The Chief Operating Officer of Sarasota County Schools, Jody Dumas, says they learned a lot from Manatee County’s mistakes. After the Palmetto High incident, they reminded and reinforced seating charts and social distancing.

“Our teachers, our staff and our bus drivers have done a great job this year in really making sure that they know where students are, not only in the classroom but also in the cafeteria,” Dumas said.

When it comes to seating in the cafeteria, Dumas says students are assigned a set place where they sit every day.

“Certainly, we learn as we go and as we hear from other districts,” Dumas said. “We try and constantly reinforce the important things.”

He says knowing an employee or student’s whereabouts is critical this year.

“When that contact tracing is happening, if we’ve got seating charts in every classroom it’s much quicker, much more effective because we are identifying the right students who need to be isolated versus trying to remember in Period 7 where did Jody sit,” Dumas said. “That’s just going to be a messy process and we probably won’t have the right information.”

The Sarasota County School District returned to their classrooms on August 31st. They are nearing the end of their third week, reporting a total of 30 positive COVID-19 cases in their schools.

The district’s dashboard shows of those 30 cases, 28 are students and two are employees. Their dashboard does not however report how many quarantines are associated with a positive case.

10 Tampa Bay requested that information from the district.