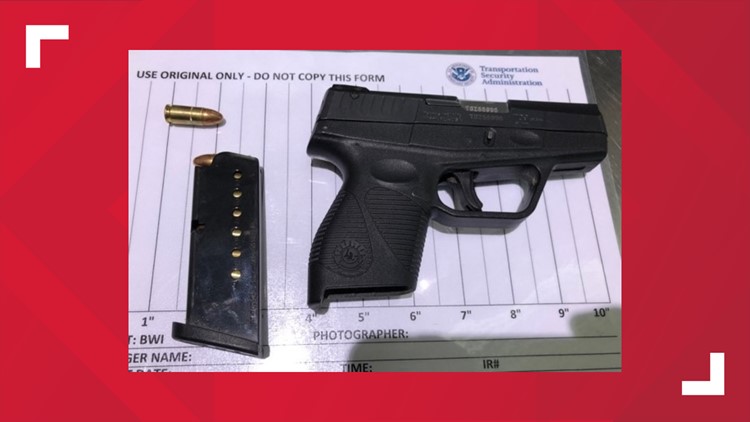 Photo by: TSA
A Fort Washington man was detained at BWI Airport Tuesday morning after a TSA officer spotted a loaded handgun in his carry-on luggage.

BALTIMORE — A man from Fort Washington was stopped by Transportation Security Administration officers at BWI Airport after he was spotted carrying a handgun Tuesday morning, according to police.

Police said that a TSA officer spotted the weapon in the man's carry-on bag as it went through a security checkpoint X-ray machine. According to TSA, the 9mm handgun was loaded with 8 bullets, including one round in the chamber.

Maryland Transportation Authority Police were notified and responded to the checkpoint. MTA Police confiscated the firearm and detained the man for questioning before arresting him on weapons charges.

The man claims he forgot he had the loaded weapon on him when he arrived at the airport, TSA officials said.

According to officials, passengers are allowed to travel with firearms in checked baggage if they are properly packaged and declared. Firearms must be unloaded, packed in a hard-sided case, locked, and packed separately from ammunition. Firearm possession laws vary by state and locality.

This is already the second gun that TSA officers have caught so far this year.

TSA officials say nationwide last year, 4,432 firearms were were found in carry-on bags at checkpoints across the nation, averaging about 12.1 firearms per day, approximately a 5% increase nationally in firearm discoveries from the total of 4,239 detected in 2018.

As a reminder, individuals who bring firearms to the checkpoint are subject to possible criminal charges from law enforcement. Even travelers with concealed firearm permits are not allowed to bring guns onto airplanes in their carry-on bags. If the individual is a TSA Pre✓® member, that person could even lose their TSA Pre✓® status.

In addition, TSA has the authority to assess civil penalties of up to $13,333 for weapons violations. A typical first offense for carrying a handgun into a checkpoint is $4,100.

RELATED: Airport-inspired security could come to a Metro station near you