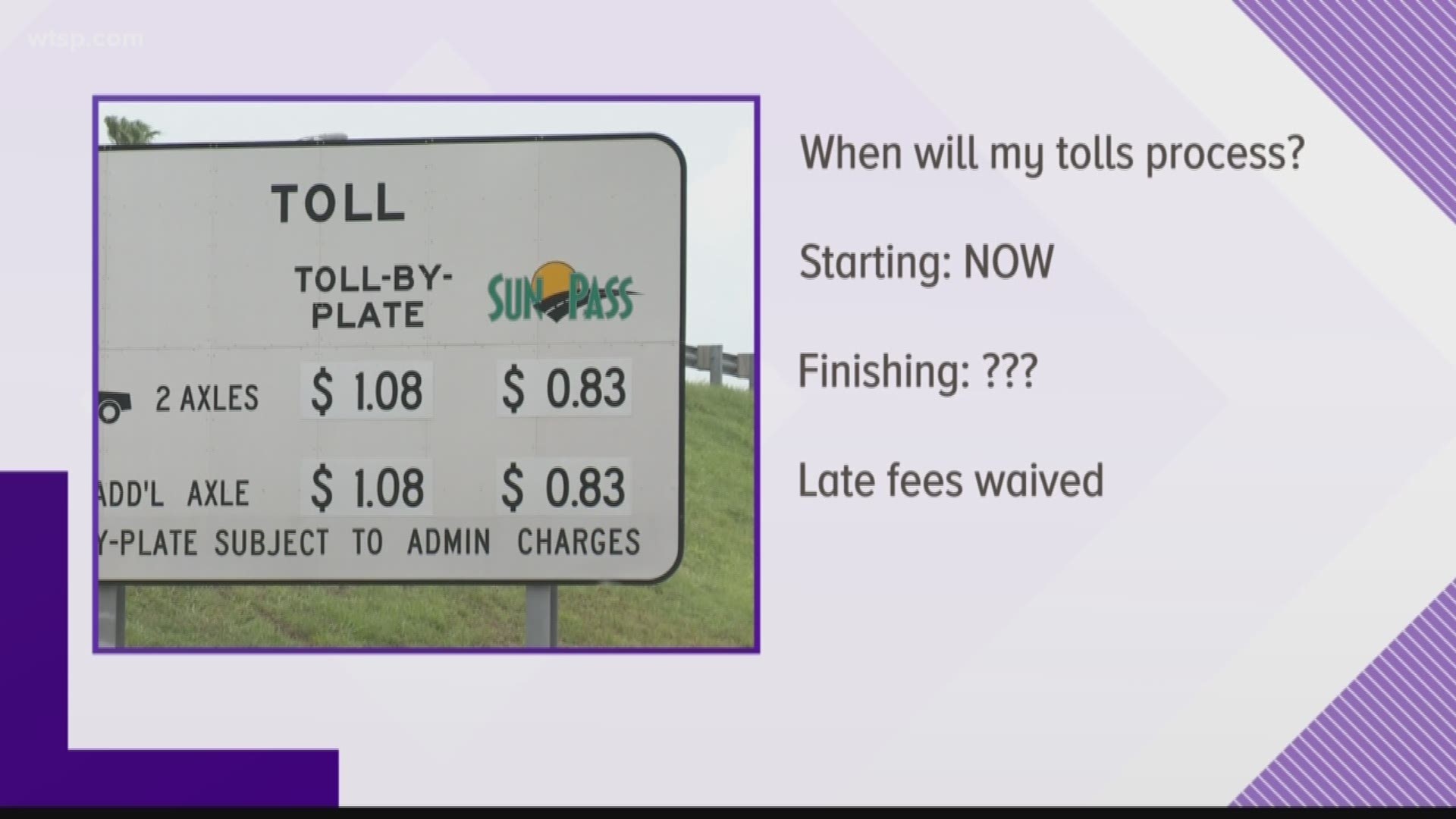 TAMPA BAY, Fla. - The Florida Department of Transportation has successfully processed four million SunPass toll transactions and a spokesperson says the agency will soon start trying to reduce its backlog of more than 100 million toll transactions. But no timetable is available for how long that will take - or when charges will hit customers' accounts.

The four million transactions represent only about one day's worth of electronic toll activity. But its a milestone for the state, which had not been able to successfully process any tolls for more than a month due to contractor failures during what was supposed to be a six-day rebuild of the SunPass system.

10Investigates first broke the news Tuesday the state had finally solved a double-billing problem that plagued the new system and delayed tolls from hitting millions of drivers' accounts for more than a month.

FDOT and Florida Turnpike Enterprise (FTE) officials have been extremely tight-lipped with information regarding how the widespread SunPass failures and what they would do for customers as they try to catch up on a 33-day transaction backlog.

"Customers will begin to see their toll transactions posted to their accounts," an FDOT spokesperson said in a written statement. "Individual account charges will be posted gradually, beginning with the oldest transactions first. Late fees and penalties will not be imposed until the system is operating fully and providing the benefits and ease of access that SunPass customers deserve and expect."

But drivers continue to take to social media to vent about their inability to file expense reports, their problems with SunPass customer service, and their concern for monster bills that could arrive once all the backed-up tolls are processed. What started as a month's worth of computer problems could to continue as customer service problems.

10Investigates broke the news two weeks ago about the widespread billing problems, which have led to a backlog of about 100 million toll transactions.

The electronic tolling upgrade, designed to consolidate many of the state's large tolling authorities on a single billing system, was supposed to last from June 6-11. However, the state's chosen contractor, Conduent, had failed to get the system to work properly the entire month.

Following more than a week of 10Investigates' questions about Conduent and SunPass, the state put the contractor on notice last Thursday. It had 10 business days to straighten the mess out or it would be in default on its $287 million contract.

The acknowledgment of the system's failure was a departure for FDOT and the Florida Turnpike Enterprise (FTE), which had initially downplayed the problems to 10Investigates and dismissed them as an "inconvenience." A spokesperson said tolls were being held up simply as a courtesy to drivers while the state perfected its new system.

Two weeks later, the lack of communication from the state is compounding frustrations with the system outage. FDOT and FTE spokespersons had not returned 10Investigates' messages for four days.

Drivers report long waits to speak to SunPass customer service representatives, only to be told the operators have no answers and the system should be back up and running "soon." One viewer, who identified herself as a Conduent/SunPass call center employee, expressed frustration at the lack of information she had been provided in order to do her job.

10Investigates has been documenting how FDOT gave the $287 million electronic tolling contract in 2015 to Conduent (then, a part of the Xerox company) despite its ongoing problems with electronic tolling systems around the country. Even as problems grow - in at least five states - Conduent has continued to pay its top executives tens of millions of dollars.

When 10Investigates took the problems to Gov. Rick Scott last week, it didn't appear as if he had been briefed as to the severity of the failures.

His spokesperson has since put out a statement that said, "Gov. Scott firmly believes that every vendor that does business with the State of Florida first and foremost serves and is accountable to the families and taxpayers of our state...FDOT has committed that this vendor will be held fully accountable and that FDOT will continue to aggressively work until this is fixed.”

The state announced it would waive all late fees related to the system outage, but it has failed to answer some of 10Investigates questions regarding what it would do to address the impending crush of customer service calls once tolls begin processing.

A FDOT spokesperson said Monday wait times for SunPass call centers have been reduced from 30 minutes to around 10 minutes. However, they are anticipating more problems once tolls start processing again and staff will be working "extended hours."