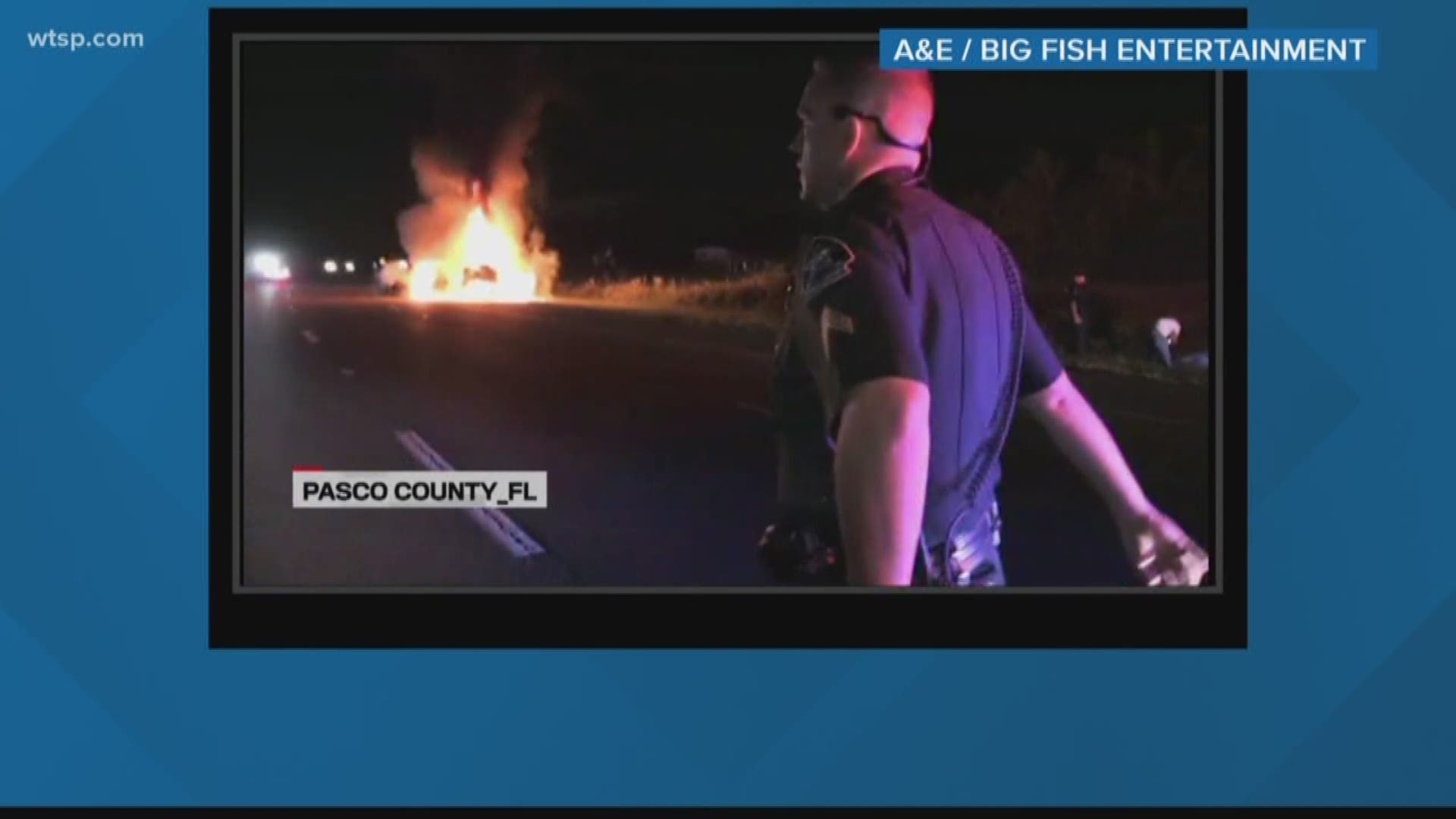 The family of a victim injured during a head-on crash caught on national TV through the popular A&E show “Live PD” are voicing their concerns.

Monday, Pasco deputies released body-cam video of the fiery crash in which Sheriff Chris Nocco said his deputies were justified in chasing Blomberg.

Nocco extended his thoughts during the Monday press conference to Sober, who was hospitalized after being hit head-on during the pursuit by Blomberg's vehicle.

"I don't think a lot of people in dangerous situations intend to be there," Nocco said. "But everything was because of that suspect. If we don't pursue that vehicle and the woman is killed, we have to hold another press conference, answering the question, 'Why was this woman killed?'"

They responded after a clerk at the Circle K near the Ballantrae subdivision on State Road 54 called 911 after reporting to police he saw a man assaulting a woman, possibly trying to kidnap her.

Nocco said, as deputies arrived, they saw Blomberg driving a Chrysler sedan out of the parking lot and they followed. He said they went after Blomberg out of concern for the woman's safety:

"Our deputies believed she was in that vehicle," the sheriff said. "It just happened that she was still at the gas station."

Sober was in the car Blomberg crashed into. Sober survived the crash with a broken leg and severe burns.

Sober's lawyer, Hunter Higdon, is concerned that because the crash aired nationally on “live TV,” the whole ordeal was sensationalized and may have prompted Pasco deputies to chase.

Heather says the video is hard to watch, but she’s thankful her husband is alive.

“To watch the videos and all this footage over and over and over, and to sit in that hospital all night and watch the effects of it all,” she said. “He keeps telling me, 'I’m alive. Stop crying, I’m still here.'”

Sober says her husband was driving his street sweeping truck between job sites when the crash happened.

Higdon is looking into whether the filming of the show “Live PD" played a role in Pasco deputies chasing Blomberg leading to the crash.

“This show makes money off of having officers putting themselves in precarious situations that they otherwise would not, just so that they can get on TV,” Higdon said.

Mario Tapia says he was almost hit by Blomberg running from deputies moments before the crash. He turned around to help after seeing the cars in flames.

“It was the scariest thing ever,” he said.

Tapia said it seemed like he was the only person who ran to help Sober. “I kept thinking why are all the officers over there? Then I saw a man with a bulletproof vest on that said 'Media' on the back."

Tapia sent a text to Sober's wife letting her know he’d be okay.

“I was patting him on the shoulder, telling him he was going to be OK. He kept telling me, 'Man, please don’t leave me, am I going to die?' I told him, 'You are not going to die. I’m going to stay with you the whole way.'”

Complete strangers united by a crash as lawyers try to figure out what led to it.

"We will pursue anyone that is legally responsible for this incident," Higdon said.

The victim’s lawyer isn’t saying whether or not they will seek damages from the Pasco County Sheriff’s Office or the show “Live PD,” only saying they want to review all of the footage before making that decision.

The Sober family has set up a GoFundMe page to help pay for mounting medical bills.

Contrary to reports, Live PD cameras were not embedded with the Pasco Sheriff deputies that were involved in the pursuit and they did not film the chase or subsequent crash as it occurred. Live PD cameras were embedded with other deputies who only arrived on the scene after the pursuit had ended and the emergency medical responders arrived. Additionally, we do not comment on pending or potential litigation.