It wants the Pasco County School District to stop sharing information with the sheriff's office. 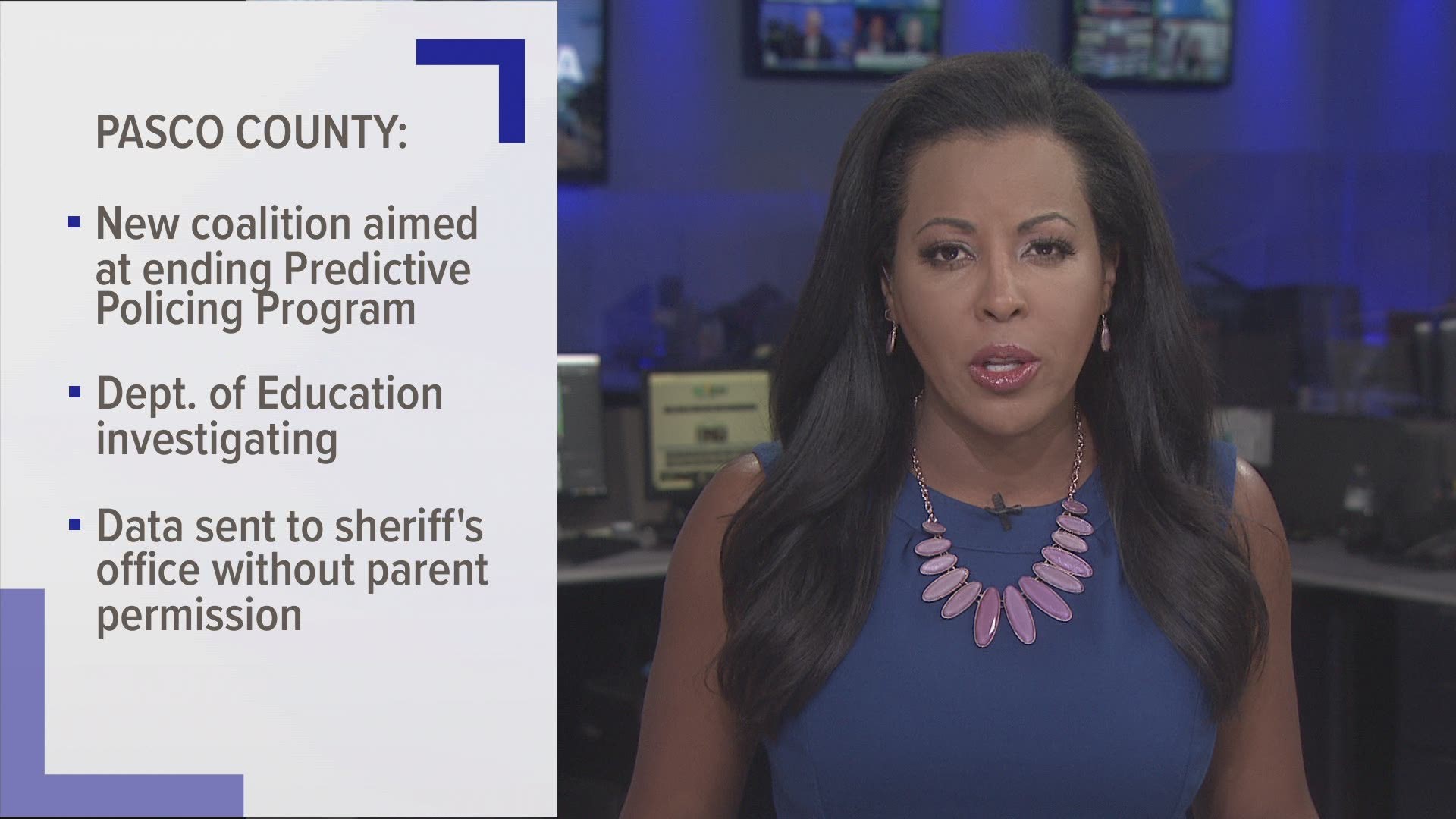 LAND O' LAKES, Fla. — Thirty organizations on Monday announced the formation of a new group calling upon the Pasco County School District to stop sharing private information about students with the sheriff's office.

Called the "PASCO Coalition: People Against the Surveillance of Children and Overpolicing," its leadership says it applauds the U.S. Department of Education for launching an investigation into the data-sharing practices, according to a news release.

The Pasco County School District shared information on student grades, discipline and attendance with the Pasco County Sheriff’s Office. The agency then used the data to compile a list of students officials believed could "fall into a life of crime."

The agency is already facing a federal lawsuit that the intelligence-based policing program violates people’s rights by improperly targeting and harassing them.

The investigation followed a call for review by a Virginia congressman who leads the House Committee on Education and Labor.

The investigation also follows reporting from the Tampa Bay Times, which first broke the story in November that the school district was reportedly sharing such information with the sheriff's office.

As the newspaper notes, the district has previously objected to the Times' characterizations of the matter – but has not discussed specific concerns.

Sheriff Chris Nocco earlier this month said, at the time, he did not know about an investigation and the information being shared does not go beyond the school resource officer.

The PASCO Coalition in a statement said, in part:

In response, the school district said it tries to "strike the right balance."

"Pasco County Schools and the Pasco Sheriff’s Office have a strong longstanding partnership. Our School Resource Officer (SRO) program dates back almost thirty years and our School Safety Guard (SSG) program was successfully implemented three years ago. These programs have enhanced safety for students and staff. We worked closely with the Sheriff’s Office before the Marjory Stoneman Douglas tragedy and then took the lessons learned from this tragedy to further enhance safety in our schools. One of the findings of the Commission that examined the tragedy at Marjory Stoneman Douglas High School was that agencies failed to communicate with each other and failed to share information.

"Our data sharing and collaboration takes many forms. Our school district works with the Sheriff’s Office to recruit and train School Safety Guards. We continue to refine our crisis planning and to implement law enforcement participation in our threat assessment teams as required by legislation following the Marjory Stoneman Douglas shootings.

"A great deal of what has been written has focused on one aspect of this data sharing agreement, and that is the law enforcement piece.  Our information sharing is a two-way street. What has not been talked about are the many instances where we have been made aware of a situation involving one of our students because of something tragic happening in their life.  This involvement allows the school district’s staff to provide additional supports to the student and/or the student’s family.  Countless times our relationship with the Sheriff’s Office has benefitted our students, because the Sheriff’s Office often knows of things that we do not.

"We strive to strike the right balance with mutual information sharing as we make every effort to meet our top priority – keeping students safe. Our grant with the US Department of Justice actually requires data sharing between the two agencies.  Our agreements with the Sheriff’s Office are frequently reviewed and, when appropriate, revised or updated. We look forward to responding to the inquiries from the US Department of Education, and we will continue our ongoing dialogue with the Sheriff’s Department so that our students continue to fully benefit from their involvement in our schools."

People interested in hearing more from the coalition can attend a town hall scheduled for Saturday, May 8, and can contact the group at 727-371-6199 or thePASCOcoalition@gmail.com.