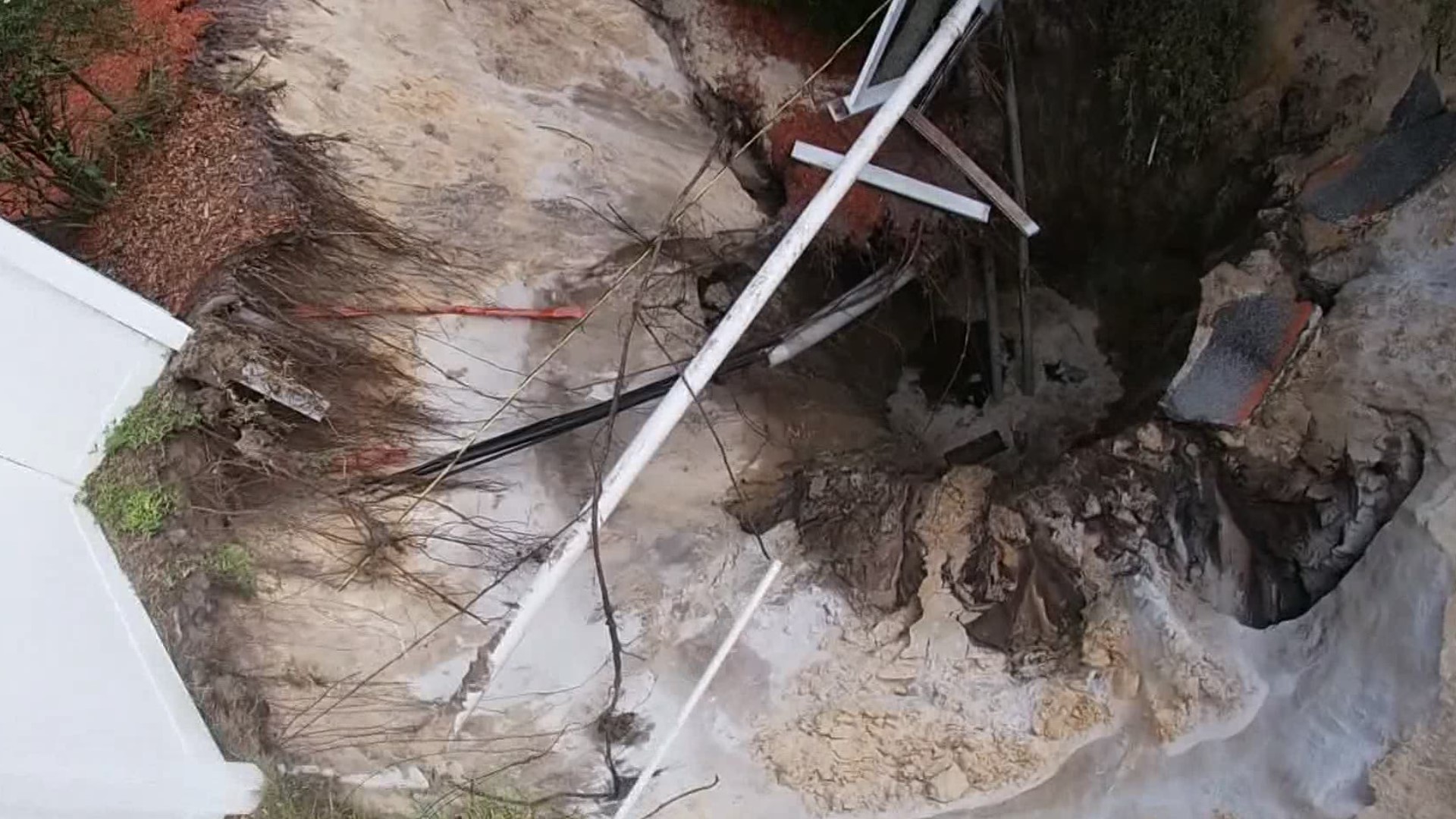 TRINITY, Fla. — UPDATE #2: We are getting more information from Pasco County on the status of a possible sinkhole it has been tracking.

Officials say the hole has opened another four feet, meaning it currently sits at 46-feet in diameter. The county has also determined the hole extends approximately 60-feet below the visible water line giving it a depth of 130-feet.

An engineering firm was out today to perform underground testing. Results are not expected until early next week.

The outside lane of Little Road remains closed.

UPDATE: The closure of a neighborhood sports bar due to a suspected sinkhole in Pasco County has come to an end, in part.

Pasco County reports that after its building services team reviewed the information provided by Varsity Club Sports Bar's engineering firm, it has removed the "unsafe" posting from the building. Now, customers are allowed back inside, but the patio area must remain closed because it is closest to the hole.

According to Fossa, the hole is currently 42-feet in diameter, 70-feet deep and remains active. A county engineering firm will be out on Saturday to examine the hole.

The outside lane of Little Road is closed until further notice as a precaution.

A suspected sinkhole in Pasco County has continued to widen and is now forcing the evacuation of a neighborhood bar.

The county tells 10 Tampa Bay the large hole has gotten 10 feet wider since Tuesday and is now at least 38-feet wide and about 70-feet deep. County building services says the nearby Varsity Club Sports Bar will remain closed as a precaution, deemed "unsafe due to its proximity to the hole."

The possible sinkhole, which is officially being called a depression until geologists make a final determination, opened up earlier this week just north of State Road 54 on the west side of Little Road at the intersection with Spring Haven Boulevard.

Pasco County’s emergency management director says the hole was originally measured at around 5-by-10 feet Monday morning when it was first discovered and has since grown substantially.

That suspected sinkhole in Pasco County is now about 75 feet deep and roughly 35 feet wide. https://t.co/DVzc5EpsdS

Temporary roadblocks were set up, blocking off Spring Haven Boulevard. People who live in the Spring Haven Condominiums are being forced to cut through the Walmart Parking lot to enter and exit their complex.

RELATED: Suspected sinkhole in Pasco County continues to get bigger