Police say Walter Brois barricaded himself inside a hotel room after driving away from a scene where he attacked an officer. 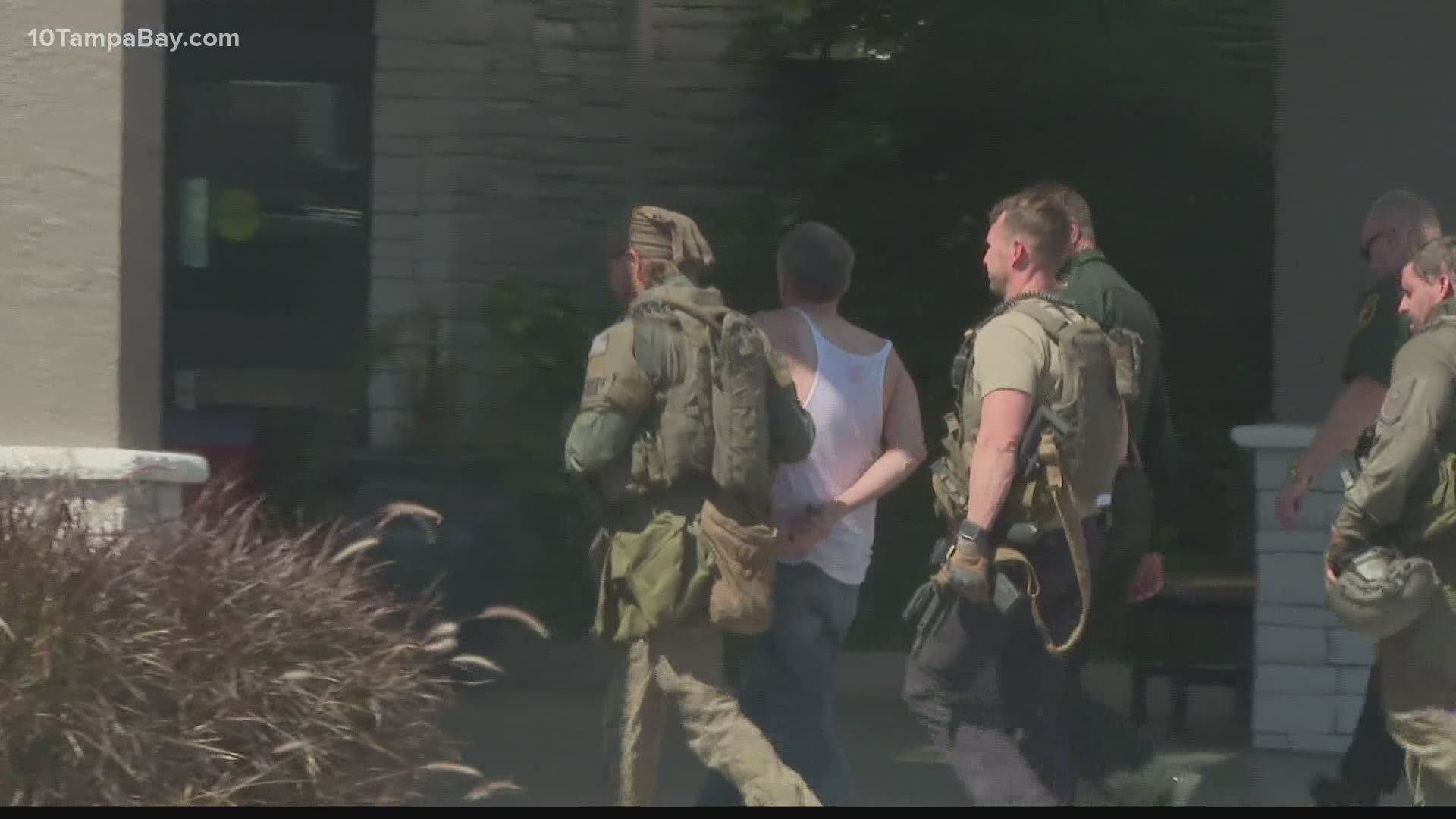 PINELLAS PARK, Fla. — After a 12-hour standoff, authorities say they have arrested the man who barricaded himself in a hotel room at the Comfort Inn on Ulmerton Road in Pinellas Park.

Pinellas County Sheriff Bob Gualtieri says Walter Brois, 49, is a convicted felon with 41 arrests and 142 charges during his lifetime. Brois is also reported to have spent 13 years in state prison and was just released in October 2020.

"Here we go again. This is astonishing as to why somebody like this is on the street, why he’s out here engaging in this type of conduct," he said.

According to the Pinellas Park Police Department, it all started around 8 p.m. Wednesday when an officer noticed a truck in a Sam's Club parking lot that had a stolen tag.

The officer immediately gave orders for him to stop and ended up being trapped in the passenger's side door of the truck as Brois drove off with the officer inside, according to Pinellas Park Police Captain Adam Geissenberger.

Investigators say the officer deployed his Taser twice while Brois continued to attack the officer.

Law enforcement continued to chase Brois until things got too dangerous, according to Geissenberger.

Investigators say they later found the truck at the Comfort Inn where Brois was barricaded inside a room and SWAT was called in.

SWAT moving in with heavy equipment. Suspect is still barricaded on the 4th floor. He is armed. Has 2 warrants- one in Hillsborough, one in Pasco. He was initially contacted for stolen car/tags in Pinellas Park, which led to him barricading at this Clearwater hotel. @10TampaBay pic.twitter.com/5WduDOxlj1

While trying to make contact with Brois, Pinellas Park Police Chief Mike Haworth says, "he made it painfully clear that he was not going to come out and that we were going to have to come in and kill him.”

Officers deployed gas into the room, to no avail, and were able to have contact with Brois until it all came to a halt at 2 a.m., according to Haworth. The sheriff's office adds Brois shut off his cellphone and would not answer any calls or texts.

After eight hours of attempts to negotiate with Brois, the Pinellas County Sheriff's Office was called in to help.

Gualtieri says the sheriff's office had information that Brois was armed while in the fourth-floor hotel room and even took out the gun and racked it while SWAT was trying to get him to come out.

"So, he was armed and as we were trying to deal with him—was racking the gun and prepared to use it. So, thankfully everybody came out of this safely," the sheriff said.

But it wasn't an easy feat.

SWAT has been in this holding position for more than 2 hours now. They’ve set off flash bangs, a planned explosion but still do not appear to have the suspect in custody. They do believe he is armed & dangerous. pic.twitter.com/pMpAQkfHoa

Gualtieri says the SWAT team deployed over 50 rounds of tear gas into Brois room over several hours and "it didn't affect him at all." He also says a hotel window was broken out, and explosives were used to breach Brois' hotel room door due to it being barricaded with furniture, coolers and a separate door.

Once inside the room, the sheriff's office says a drone found Brois wrapped several times in sheets and hunkered down on the bed. Bean bag rounds were shot at Brois and he was taken into custody, according to Gualtieri.

“This is a bad guy. This is a guy that really shouldn’t be on the street. How can you have these hundreds of charges, these multiple arrests, these 30+ convictions and the guy is out here doing this," the sheriff said, in part.

During the investigation, the Comfort Inn was evacuated and roads in the area were closed for safety purposes. The roadways have since reopened.

As for the woman who was with Brois at the Sam's Club, Pinellas Park police say she made her way from the store's parking lot to the hotel where she was taken into custody.

Authorities say Brois is facing at least three charges related to the barricade incident, in addition to a charge related to an outstanding warrant for violation of probation for escape from law enforcement custody in Hillsborough and domestic aggravated battery and assault charges out of Pasco County.