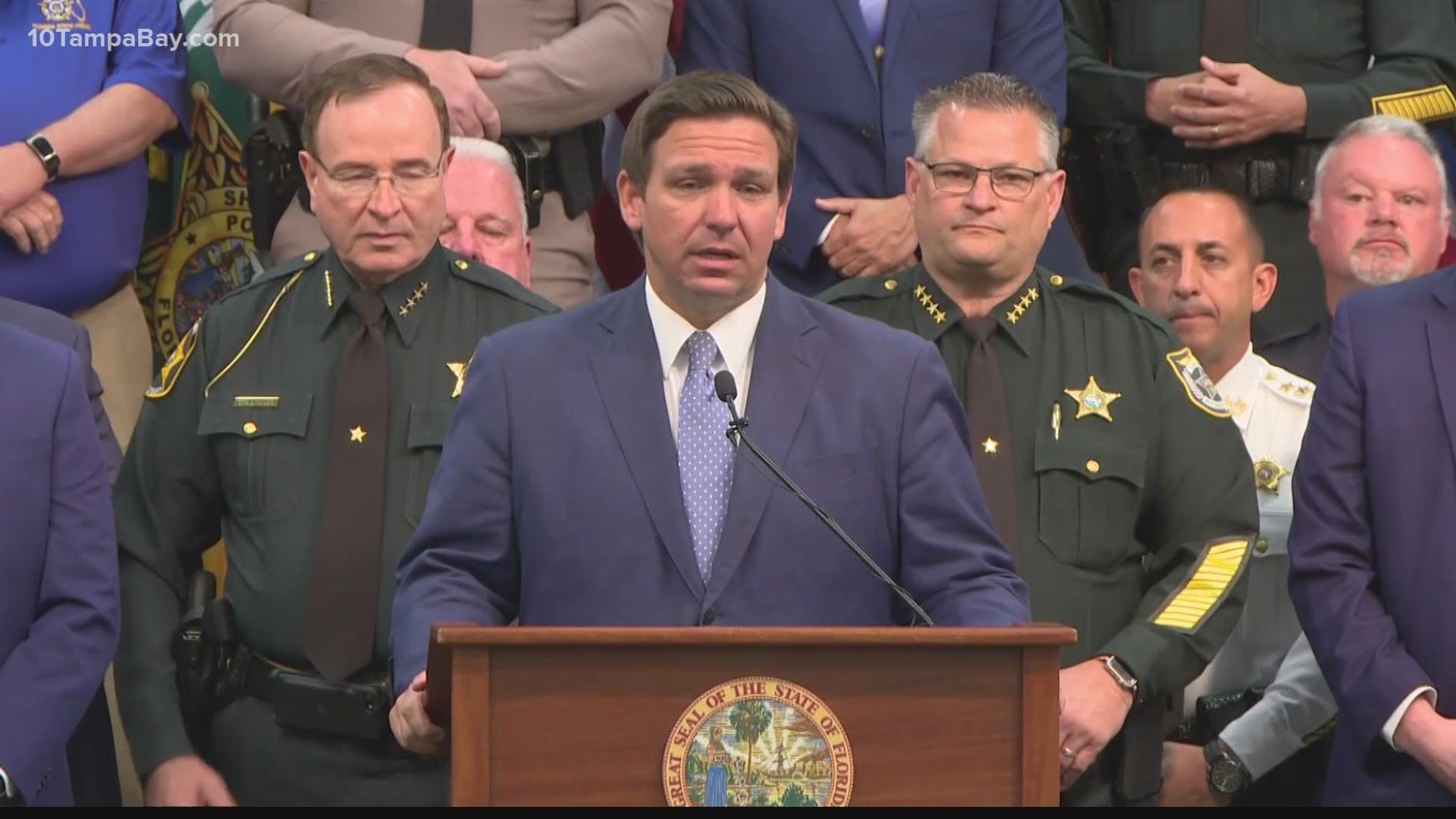 Critics of the bill have called it a "disgrace," saying it is an effort to limit First Amendment rights. In contrast, supporters say it is necessary to protect against unlawful behavior.

Gov. DeSantis began by saying the bill aims to protect people, business owners, and law enforcement officers from any sort of "mob activity," especially after protests were seen across the country and here in Florida during the summer of 2020.

"This bill, that I’ll sign into law, shows the state of Florida takes public safety very seriously," DeSantis said. He called the bill the "strongest anti-rioting, pro-law enforcement piece of legislation in the country."

Other state leaders supported the bill, explaining that they didn't want to see Florida experience the kind of property destruction seen in cities like Portland, Seattle, and New York.

"Their cities are being ravaged by crime as a result of that lawlessness," House Speaker Chris Sprowls said.

Polk County Sheriff Grady Judd said the bill would be proactive in protecting businesses and the people of Florida. He used a series of photos to encourage peaceful protests, but emphasized that riots are not acceptable.

After seeing the bill get signed into law, activists in Tampa Bay reacted to the news. They say the bill could encourage law enforcement to use force with anyone at a demonstration.

"There's always that worry. This Summer, we saw massive amounts of people arrested. Then later they had their charges dropped, but there was still mass arrests happening. With this bill in effect, now those people wouldn't have even been able to be bailed out for an arrest that was later found to be completely unnecessary," David Jones, a member of the Tampa Bay Community Action Committee said.

While Jones says the new law won't stop protesters from going out to demonstrate, he is afraid people's lives will be put in danger.

"Every aspect of this bill will scare folks out of the streets and from continuing to demand justice. For those that do continue to go out in the streets to just demanding real change in their communities, it puts their lives in danger, so you know, this bill is so terrible for folks," Jones said.

The ACLU says the legislation was "purposely designed" to embolden disparate police treatment toward "Black and brown people who are exercising their constitutional right to protest."

The organization has dubbed the bill a political maneuver.

"It was introduced as a political stunt after a year of historic protest, in which millions of Americans joined together to call for an end to the disparate killings of Black people at the hands of police," the ACLU previously said. "It is no coincidence that these bills were introduced by politicians who harshly criticized these calls for racial justice and police accountability."

Critics say Gov. DeSantis and certain lawmakers are trying to silence political speech they disagree with.

"This bill is a disgrace to our state," the ACLU has said.

DeSantis' office disagrees and previously released the following statement regarding the bill:

"With the passage of HB 1, the Florida Legislature has answered Governor DeSantis’ call to uphold the rights of our state’s residents while protecting businesses and supporting our brave men and women in law enforcement. This legislation strikes the appropriate balance of safeguarding every Floridian’s constitutional right to peacefully assemble, while ensuring that those who hide behind peaceful protest to cause violence in our communities will be punished. Further, this legislation ensures that no community in the state engages in defunding of their police. The Governor looks forward to signing HB 1 into law."