Aspects of the proposed legislation would include more severe penalties for those who participate and are arrested in "violent, disorderly" assemblies. 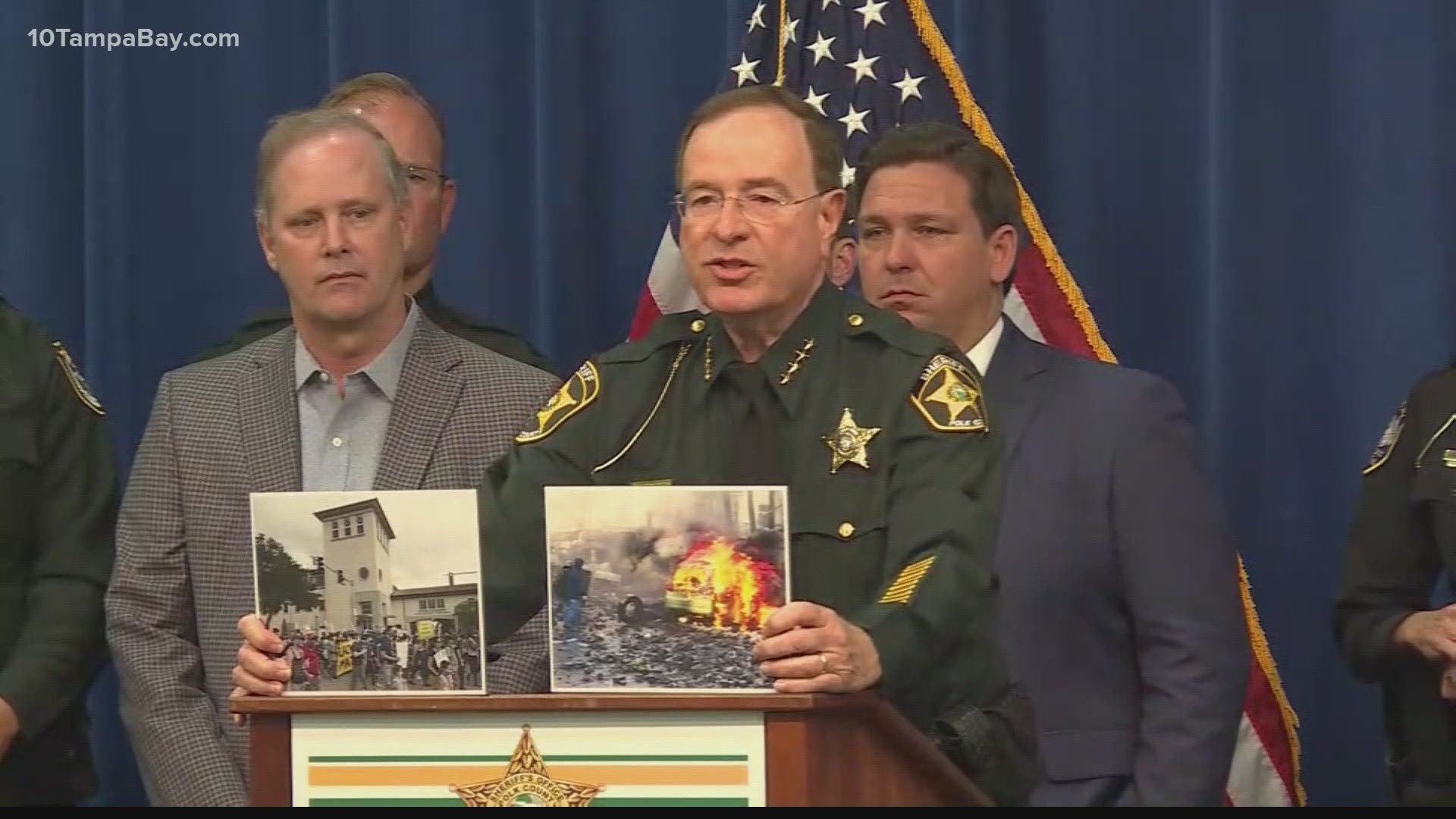 During a news conference at the Polk County Sheriff's Office, the governor announced a focal point of this year's legislative session would surround the Combating Violence, Disorder and Looting and Law Enforcement Protection Act.

Aspects of the proposed legislation would include harsher penalties for those who participate and are arrested in "violent, disorderly" assemblies. Anyone arrested could face charges listed as a third-degree felony and could be denied bail until their first court appearance.

In a one-page document outlining the proposed bill, it would be a third-degree felony "when seven or more persons are involved in an assembly and cause damage to property or injury to other persons." It, too, would be a felony to obstruct traffic during an "unpermitted protest," and a driver trying to get out "for safety from a mob" would not be held liable for injury or death.

Today I announced bold legislation that creates new criminal offenses and increases penalties for those who target law enforcement and participate in violent or disorderly assemblies. We will always stand with our men and women in uniform who keep our communities safe. pic.twitter.com/ITl5GmmrZJ

Other parts of this proposed legislation include a mandatory jail sentence of "at least six months" for anyone who attacks a law enforcement officer with a weapon or projectile. A person also would be allowed to sue a local government for damages "where the local government is grossly negligent in protecting persons and property."

Additionally, DeSantis said he would not permit local municipalities to "defund" the police.

"If you defund the police, the state will defund any grants or aids coming to you," the governor said Monday.

Florida Commissioner of Agriculture and Consumer Services Nikki Fried called DeSantis' announcement a "political stunt" ahead of the election when there are more pressing issues at hand.

She, too, called the proposed bill unconstitutional.

“Our Panhandle is recovering from Hurricane Sally. COVID-19 rages on, making children, families, school staff, and essential employees sick. We continue to see lives lost and rising cases in every age group. Over a million Floridians are unemployed, and our economy is facing years of recovery ahead.

“Instead of prioritizing issues impacting people’s lives, Governor Ron DeSantis and the Republican Party of Florida are fear-mongering at the expense of Floridians, and making a mockery of our legislative process to pull a political stunt for Donald Trump ahead of the 2020 election.

“As an attorney and former Public Defender, I’m a firm believer in due process and the rule of law. We all condemn violence. That’s why we have laws in place that make violence illegal.

“This bill is unconstitutional, authoritarian, and serves as a distraction from the serious issues Florida is facing. It will only move us backwards in the pursuit of social justice.”

You can watch the press conference in full below here: