Days after and EF-2 tornado hit their community, the neighbors of Kathleen are still picking up the pieces. 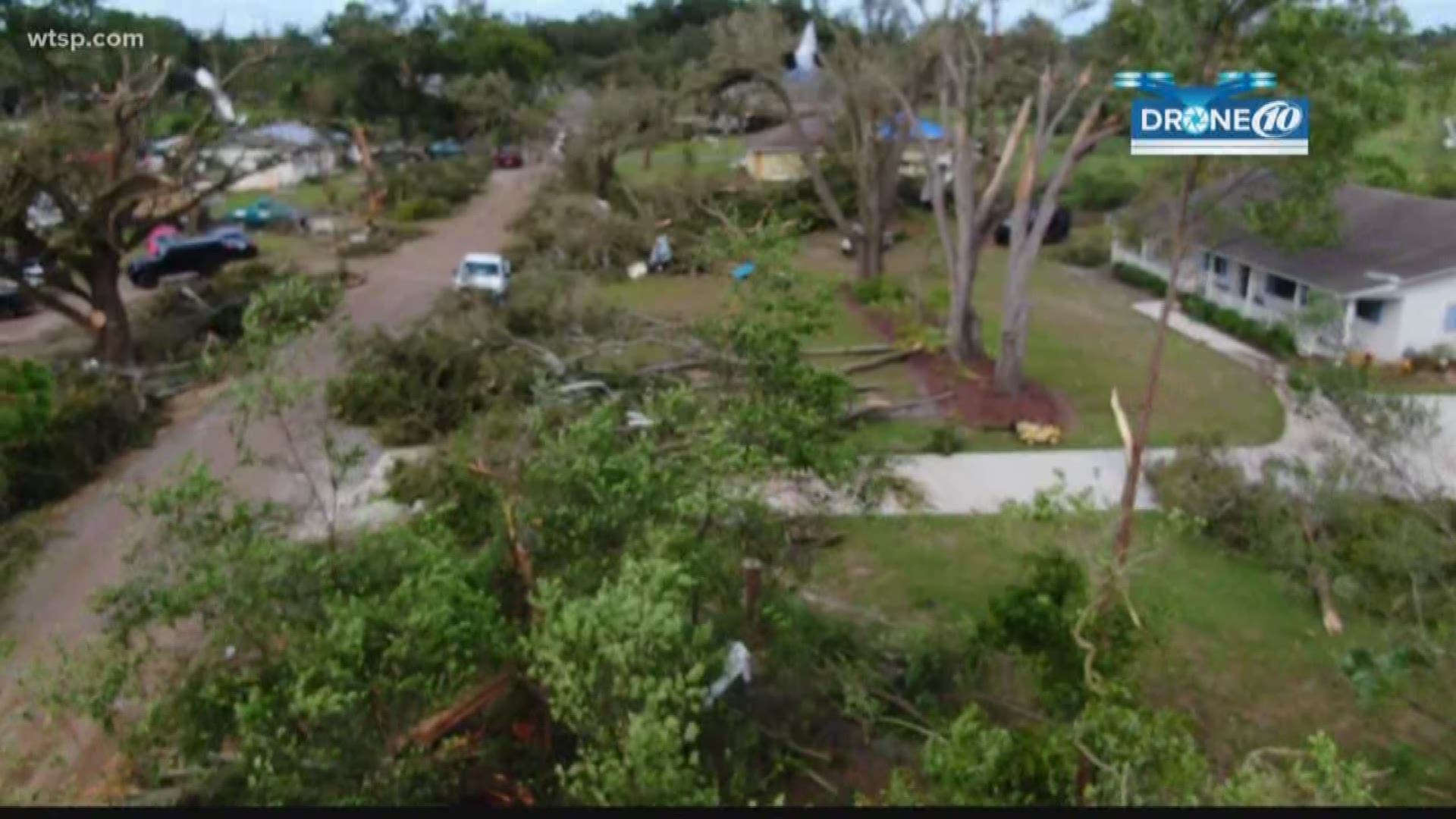 KATHLEEN, Fla. — For those whose property escaped major damage, conditions are beginning to improve in Kathleen, Florida. That's where an EF-2 tornado spawned by Tropical Storm Nestor tore through the community Friday night.

For others, no amount of progress will bring back what’s been lost anytime soon.

On Saturday, streets like Timberlake Road were impassible. On Monday, people could see how crews were able to cut up large portions of the downed trees and move them to the side of the road.

That work has made it possible for power companies and utilities to get into the neighborhood and restore service.

Insurance adjusters have also been seen in the area, determining if homes have been merely damaged or suffered a complete loss.

Several structures now have bright orange stickers on the window – or whatever’s left – letting the owner know the property has been deemed unlivable and condemned.

“I was born and raised here in Lakeland, I’m used to hurricanes,” said Janet Estridge, whose home of 25 years was completely covered in blue plastic tarp material. “I’ll take a hurricane any day over this. This is unbelievable.”

Janet said she hid in a closet as her husband Willie watched the storm blow out the windows to their home. When he was asked if he felt blessed or cursed, he was quick to answer.

“Blessed,” he said. “ Very blessed. Because I’m still here. You’re talking to me in living color.”

“God had his hand on us. That’s all I can say, you know? We firmly believe that,” Janet said.

Early Monday, Janet found a family album filled with priceless pictures which been sucked out of a closet and flew two lots away.

She’s also been wearing a mask over her mouth, fearing an asthma attack, as people are starting to burn debris in the area. She said the smoke, along with sawdust and insulation, has been blowing around and creating health issues for folks like her.

As is the case during almost any natural disaster, workers have swooped into the neighborhood offering their services. Roofers. Debris removal services. Tree cutters.

They all know there’s work to be done, and there’s money to be made.

Carlos Collins, who owns Cribs Unlimited Tree Services, said while they’ve been welcomed with open arms by some, that hasn’t always been the case.

“Some are pleasant, and some are not,” Collins said. “The ones that are not so pleasant is because, again, they think that we are, as a tree service, here to just make a financial gain. But, I’m here as a godly man to help out.”

It’s very important, even as desperate as things might seem, to make sure that contractors are properly licensed and to avoid making full payment to anyone until the job is done, law enforcement said.

As the debris is cleared, it’s also making it possible for others to do their work.

Insurance adjusters, roofers and even the U.S. Mail, which was delivered for the first time in a few days.

Marcy Soberal, who has been a postal carrier in the hardest-hit neighborhood for years, was brought to tears by what she saw Monday along her route.

“Saturday was horrible. It was, I don’t know. It’s still hard,” she said. “Now that I’m coming through, I’m not even sure if some people made it. You know?"

It makes her even more determined to deliver the mail, even if there’s little more than a post office box at the end of the driveway.

“I don’t know if there’s something that they need in there. You know? Checks, it could be anything,” Soberal said.

Amid the images of large trees snapped in half, heavy vehicles lifted in the air, and homes obliterated, shock is slowly giving way to the resolution that work needs to be done. And in Kathleen, it is.