Close to 100 applicants have advanced to training, but efforts to widen the pool continue because not every applicant has passed the intensive process. 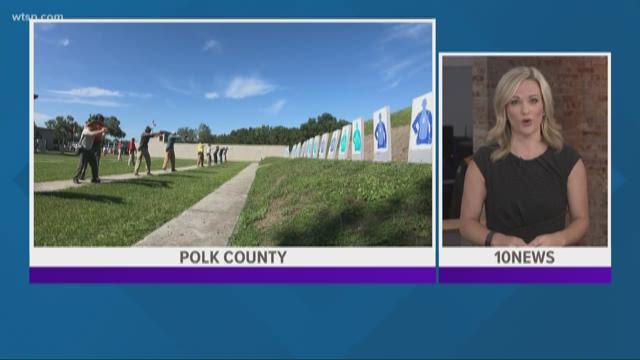 BARTOW, Fla. – With the start of a new school year less than one month away, the Polk County Sheriff’s Office says it hopes soon to begin hiring for its Guardian program.

In total, 90 positions need to be filled. So far, 98 applicants have advanced to training, according to the sheriff's office, but efforts to widen the pool continue because not every applicant has passed the intensive training process.

"We knew from the very beginning there would be a 40-50 percent fail rate because even though they've passed the background, the psychological and drug screening, this is tough training," said Polk County Sheriff Grady Judd.

Additional interviews were conducted last week for more potential candidates to begin training July 23, according to the sheriff’s office. The county's received more than 500 applications, according to Judd.

Hiring is expected to begin later this month.

The Guardian program—arming everyday people with guns—aims to train candidates to take down a potential school shooter.

Polk County law enforcement and school leaders were first to embrace the idea amid skepticism in several other counties.

Candidates must first pass background and psychological checks before they can take part in a rigorous six-week course. Through both virtual and live action shooter scenarios, trainees are taught how to use a firearm and shoot with precision for more than 100 hours of training.

In addition, candidates must then score high enough on written and tactical tests before they can be considered for a position in one of Polk County’s 85 elementary schools. Once hired, training and testing continues twice a year for as long as the Guardian holds the job.

“This is the last best chance to save your child when all the different layers of security have failed,” Judd said. “Their job is simply this: to be well-trained, to react within seconds, to find the active shooter and kill him graveyard dead before he can hurt your child with a gun.”

These guardians are not school resource officers. They will have no authority to arrest and will not be considered law enforcement. However, they will carry a firearm on campuses.

The Guardian program is a collaboration between Polk County Schools and the sheriff’s office. The position was created to meet new statewide requirements set by the Marjory Stoneman Douglas High School Public Safety Act.

Judd promises that will happen.

"We're on schedule, there's no panic because we are meeting our marks" he said, adding that if they do come up short with positions, say in some of the area's charter schools, the sheriff's office will temporarily fill the vacancy with a deputy.